Foreign funds have dominated the biggest deals in the Indian e-commerce sector. In July 2014, a clutch of foreign funds led by Tiger Global and Naspers invested a jaw-dropping $1 billion in Flipkart. The deal valued the company at $7 billion and is the biggest ever round of funding in an Indian e-commerce player. A few months later, in October 2014, Japanese Internet and telecommunications group SoftBank put down a staggering $627 million in Snapdeal. It valued the company around $1.2 billion. 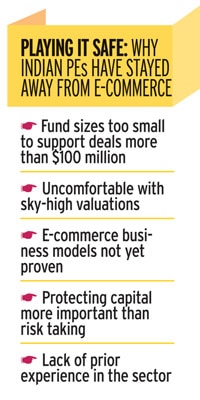 In the year gone by, two big trends came to the fore. One, Internet deals came back into fashion with venture capital and private equity (PE) funds pumping in $3.2 billion into new and existing Internet companies in India. Indeed, this number is likely to be much bigger as most global funds do not disclose their individual investments in companies. Two, the biggest deals saw Indian investors being relegated to the sidelines while the big boys from abroad plunked down hefty sums of cash in e-commerce ventures. "The global investor sentiment around Internet and digital businesses is much more bullish than before," says Ashish Bhinde, Co-founder and Managing Director at Avendus Capital, a financial services firm which has facilitated a number of e-commerce investments in the country. "There could not have been a better timing because India, as they say, is six to seven years behind China."

Most global funds do not even have an India office. Often deals are sewn up over the phone or Skype. A start-up CEO, who raised early-stage funding of over Rs 50 crore from Tiger Global and other investors, says the deal was concluded over a Skype call with Lee Fixel, Managing Director and Partner at Tiger Global Management.

Emails sent to several global funds on their India strategy - Sofina, Vulcan Capital, Steadview Capital, Temasek, DST Global and Tiger - went unanswered. Only Naspers responded, acknowledging that it was bullish on e-commerce in India. "We have recently been increasing our investment in India and have no plans to exit. Our current focus in India is in the area of e-commerce, a sector which we believe represents significant growth potential," says Meloy Horn, who heads Investor Relations at Naspers. The fund's India portfolio includes Flipkart, OLX, PayU and Ibibo Group comprising Goibibo, Redbus and TravelBoutiqueOnline (TBO). "Global investors have realised the tremendous opportunity that this industry presents and rightfully anticipate high return on investments," says Kunal Bahl, co-founder and CEO, Snapdeal.

By all accounts, then, foreign funds continue to eye opportunities in India. Consider the example of Bangalore- headquartered online grocery store Big Basket, which raised $32.8 million from domestic venture capital firms Helion Advisors and Zodius Capital in 2014. The start-up does not need more capital immediately but has already been approached by a couple of global funds. "Investors are closely watching the online grocery space in India," says Hari Menon, Co-founder of Big Basket.

India-based PE funds - Multiples Alternate Asset Management, ICICI Venture, Kotak Private Equity, Everstone Capital, among others - have stayed away from e-commerce altogether. Have they missed the big e-commerce opportunity and why? Most Indian PE funds are usually mid-sized growth stage funds with corpus ranging from $300 million to $400 million. In contrast, global funds participating actively in the Indian e-commerce story are much larger multi-billion-dollar funds. Consequently, they have a bigger investment appetite. The eighth fund raised by US-based Tiger Global, one of the most active global investors in Indian e-commerce companies including Flipkart, in April 2014 had a $1.5 billion corpus. Seven months later, in record time, Tiger raised another $2.5 billion fund. DST Global, a fund owned by Russian billionaire Yuri Milner and which led the $210 million funding deal in Flipkart in May 2014, manages over $1 billion. 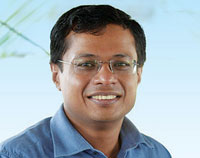 Sachin Bansal, CEO, Flipkart
"Indian funds are still at a nascent stage and do not have that kind of fire power to support large ticket sizes. The largest they have written is $30 million," says Radhika Aggarwal, Co-founder and Chief Marketing Officer at Shopclues, the horizontal e-commerce marketplace. Shopclues raised $100 million from investors led by Tiger Global in January.

Indian PE funds do not invest more than 15 to 20 per cent of their fund pool, or $30 million to $40 million in a single company. Additionally, fund requirements of Indian e-commerce leaders have snowballed recently. This has made it difficult for Indian funds to meet their needs. Flipkart alone has mobilised a total of $2.45 billion so far, of which $1.91 billion has been raised in a single year, 2014, in multiple rounds. Larger international funds are then stepping in to support Indian e-commerce companies. Indeed, apart from core e-tailing companies, such as Flipkart, Snapdeal and Shopclues, the biggest deals in other online companies have also been dominated by global investors. For instance, online classifieds company Quikr raised $60 million from Tiger Global at a valuation of $300 million in 2014 while online taxi booking service Ola Cabs received funding to the tune of $210 million from Softbank. Ola, founded by IIT Bombay graduate Bhavish Aggarwal in 2010, was valued at about $1 billion in the deal. Similarly, big-ticket deals were struck by online real estate portals in 2014, such as Commonfloor and Housing. While Commonfloor raised $60 million from global investors led by Tiger Global last year, Softbank led the $100 million funding of two-year old start-up Housing.

"Any decent large investment in India is from a foreign fund," says Srini Vudayagiri, Investment Director at Peepul Capital, an early growth stage PE fund which is running its third fund - with a corpus of $350 million - in India. The fund's average investment ticket size is $20 million to $30 million. "When it comes to late-stage companies today, they require hundreds of millions of dollars. I don't have it," says Vudyagiri candidly.

Also, for Indian PE and venture funds e-commerce is only one of the opportunities they are eyeing at any point of time. They are also scouting for opportunities in other sectors including health care, financial services, manufacturing or other technology related investments. "Indian funds have missed out on the large horizontal e-commerce opportunity because the valuations and the cheque sizes have gone way beyond what they are comfortable with," says Bhinde of Avendus Capital.

Indian funds are also concerned about the soaring valuations of e-commerce companies at a time when most of them are making losses. It doesn't deter global investors. "Lack of profitability today does not deter global investors because they have seen that in the medium to long term the market leaders can achieve profitability," says T.C. Meenakshisundaram, Managing Director of IDG Ventures India, a venture capital fund that has backed e-commerce companies like Myntra, Flipkart, Zivame and Valyoo. Like IDG, several India-focused venture funds - including Accel Partners, Sequoia Capital, Helion Advisors and SAIF Partners among others - have been early backers of e-commerce firms but have not been significant participants in big deals. "Early-stage venture funds stop investing beyond the Series C stage," says Prashanth Prakash, Partners at Accel Partners, one of the earliest investors in Flipkart. The venture investment ticket size in India usually runs from a couple of million dollars to as much as $15 million to $20 million. The average fund-size of venture funds in India is $100 million.

In fact, Indian funds have stayed away from e-commerce because of their inexperience in the sector. "Businesses like e-commerce are very, very different. They burn a lot of cash, they get valued on revenue multiples," says Bhinde of Avendus. Most large e-commerce companies need multiple rounds of capital which Indian investors don't have an appetite for. "As they are burning cash, they will need more money every year. If you don't give money every year, they will go bankrupt," says Prakash Nene, Partner at Multiples Alternate Asset Management. Kunal Bahl, Founder & CEO, Snapdeal
Global funds, on the other hand, have a very strong cross-country investment experience in Internet companies in China, Southeast Asia, Latin America and Eastern Europe. Tiger Global, for instance, has investments in more than 67 companies across the globe and has invested millions of dollars in Facebook, Google and LinkedIn in the US, NetShoes in Brazil and Youku and DanDang in China. It has so far exited companies like OnDeck, Zynga and eLong while some of its portfolio companies like Letsbuy, Myntra, Exclusively.in, GetJar and Caviar have been acquired. SoftBank, the Japanese technology, telecom and Internet giant, had invested roughly $20 million in Chinese e-commerce start-up Alibaba way back in 2000 when the tech bubble surfaced. Alibaba listed on the New Year Stock Exchange in late 2014. At the initial public offering valuations, Softbank's investment in Alibaba was worth some $50 million. SoftBank's founder and CEO Masayoshi Son sees the Alibaba potential in Snapdeal and plans to invest about $10 billion in India's Internet sector over the next decade.

Risk-taking appetite of Indian funds is very low. In Internet and e-commerce, the number of players that survive are actually very few. Capital protection is very critical to Indian funds and most of them have a mandate to target an internal rate of return of about 25 per cent per annum. "Most Indian funds are growth-focused. They are not looking at disruption or innovation but growth," says Vudayagiri of Peepul Capital.

However, e-commerce is becoming too important a sector for Indian funds to completely ignore. Some of them have invested in peripheral areas, such as e-commerce logistics, which appear to be a safer bet than e-commerce. They, however, are burning cash just like their e-commerce counterparts because of the need to expand their logistics services across cities. Peepul Capital invested Rs 100 crore in Gurgaon-based e-commerce logistics company ECOM Express this year. It was followed by Multiples, which led a $35 million investment round in Delhivery, the largest company in the e-commerce delivery space. Funds are also opening to investments in specialised e-commerce such as fashion or food. "We will not wait for valuations to cool down, we may look at the right opportunity," says Nene.

Indian start-ups often look to capitalise on the global expertise of their investors. In essence, a launch pad to go global. Online travel portal TBO is a case in point. Some two years ago, Ankush Nijhawan, Co-founder and CEO of TBO, was looking for funding to grow his start-up launched in 2007. He also wanted a partner to assist his international plans. They then met the M&A team at Naspers in Delhi. "They keep looking for interesting companies and landed on us with a face-to face conversation. It was followed by emails and calls," says Nijhawan. The deal was closed in about seven months and the MIH Group - a subsidiary of Naspers - acquired 51 per cent in his company Tek Travels, which owns TBO. The Naspers team helped TBO launch in Africa and West Asia. "Basically the intention is to piggyback on them for their experience in emerging markets," says Nijhawan, who is now planning to launch in Latin America.

Meanwhile, amidst the euphoria, there appears to be a certain irrational exuberance on valuations that some in the industry are worrying about. "There seems to be some amount of irrationality in the amount of money being raised by companies here and one can expect some level of adjustment sometime soon," sums up Sethi of Shopclues.

Book review: Salt of the Earth

Global hospitality chains get a foothold in India