'The feeling is this budget might be more of the same'

Former finance minister Yashwant Sinha and four experts with a wealth of expertise got together at our office on a Sunday for a pow-wow moderated by Business Today's Chaitanya Kalbag and Puja Mehra.

Former finance minister Yashwant Sinha and four experts with a wealth of expertise got together at our office on a Sunday for a pow-wow moderated by Business Today's Chaitanya Kalbag and Puja Mehra. Their mission: to work out the perfect budget three weeks ahead of the Union Budget for 2011-12. Edited excerpts: 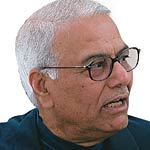 Yashwant Sinha, Former finance minister
Sinha: A budget addresses the immediate economic context. And as a budget is an annual event, it will come somewhere in the Five-Year Plan. Therefore, there is a medium-term perspective also in it. I am not talking about long term. This year, there are some urgent issues like inflation, interest rates, savings and investment, and fiscal consolidation. These will have to be taken up by the finance minister and squarely addressed in the budget. 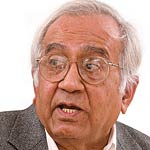 Kirit Parikh was on Economic Advisory Councils of five prime ministers
Parikh: Clearly, the primary task of this budget would be to ensure that something is done about inflation, that we do something about putting us back on the growth path and for that we need to recognise what are the problems bothering us. Oil price has gone high so it will be very difficult to control some of the inflationary pressures that we are facing now. On food inflation, as far as cereals are concerned, we should have no problem. We have lots of stocks and we should be able to keep cereal prices in control. But fruits, vegetables and edible oils... these are very difficult to control. You can import, increase availability, you can subsidise.

Even the core inflation is around 5 per cent. One way to reduce that will be to let the rupee appreciate a little bit and that will reduce the cost of imports and then you will have a lower core-price inflation index. Also, the ministerial pronouncements should not feed into inflationary expectations…when you say onion prices are going to remain high for a month - they are bound to remain high for a month. That is something the government must avoid. 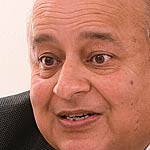 Rajeeva Ratna Shah, Former member of Planning Commission
Shah: Don't forget that this time food inflation is coming at a point of time when you are going to register a 6.5 per cent rate of growth in agricultural output. So this is a very unusual situation.

Parikh: For fiscal consolidation, we need to really rationalise a whole lot of subsidies and programmes for aam aadmi and inclusive growth that we have. Most of them do not deliver results at the ground level to the beneficiaries intended. It is not impossible to do that, there are many ways… I have been recommending employment guarantee schemes for decades, but I have always recommended them in the past as a substitute for PDS (Public Distribution System), not as a supplement. We introduce one scheme, but we do not discontinue any other scheme.

Shah: I think the social inclusion programmes could be one vertical around NREGA, with PDS and skill development also attached to it. I don't see why the NREGA design should limit itself to creation of assets only. Why not link it up to skill development? Another vertical could be related to Sarva Shiksha Abhiyan and education, and one could be health. Between these three verticals, you could take care of most of the problems of social inclusion. If you look at basic plan expenditure side, I would not advocate reduction of plan expenditure. But I do feel there is a very large area where funds being provided to the excluded sections of the society, for purposes of social equity, are being leaked out to intermediaries, which is totally undesirable.

If we don't plug that, there is no point in going on putting more funds through such a big, leaking pipe, because then we are not doing anything to ameliorate effectively the conditions of the poor. If you look at the current year's budget, I think the programmes relating to social inclusion accounted for about 37 per cent of the total outlay. About 25 per cent of the outlay went to rural infrastructure and 21 per cent to other infrastructure. These figures speak for themselves. The outlay on social inclusion, 37 per cent, comes to around Rs 1.37 lakh crore. And if Rs 1.37 lakh crore is going to be delivered through a leaking pipe then it's absolutely pointless to increase the outlay of NREGA from Rs 40,000 crore to Rs 64,000 crore. Technology today can help us deliver in a much more pointed manner. The UID programme has the potential of becoming a very accurate delivery conduit for all antipoverty programmes but the government is moving ahead at a very slow pace on it.

Parikh: To attack subsidies, there is really good scope for deregulating oil prices. The whole idea that oil price increase will increase inflation - yes, in a very immediate short run, may be a little bit of inflationary impact will be there. But over a medium term, the inflationary impact will be actually smaller than what current policies have. Because today, you are financing the deficit -the difference between the cost of import and the price at which it is sold to the consumers- through some form or other and the economy is bearing that cost. And if it is increasing your fiscal deficit, therefore, it is anyway feeding into your inflation a few months down the line. So why not really liberalise or go to market determined prices for diesel, certainly at this state?

Kerosene, I think yes. There is a strong case for subsidising kerosene for at least the poor and we can achieve proper targeting through a smart card system. I would say that the same thing should be done for LPG - target it effectively with a smart card system for the poor. Once you do that, you can reduce significantly the amount of burden that you have.

As far as fertiliser subsidy is concerned, one could immediately do the same kind of thing. Even if you give every farmer 60 kg of fertiliser at subsidised prices, current prices, and let them buy the remaining, you will cover 80 per cent of the farmers in the country for their full needs of fertiliser... And many of the poor farmers will have a surplus to sell to others so they will be the beneficiaries. And your fertiliser subsidy can be reduced by certainly onehalf or two-thirds by this kind of measure.

So there is scope available for reducing many of the subsidies if you want to rationalise them. You need to have a mechanism by which there is only one market price, so that incentive to divert goes away. The PDS should also be done the same way.

Currently, I think the investment in manufacturing and other sectors is slowing down not because there is not enough money available. In fact, banks are holding in cash reserves much more money above the stipulated level. The real problem comes from the uncertainty of what the interest rates will be, what the long-term scenario will be. That is preventing people from investing. My feeling is also that this business of raising interest rates is not going to make any impact … how would raising interest rates affect vegetable prices and anyway it is an instrument that takes time before it becomes effective. As far as I am concerned, I think the budget should push GST [goods & services tax] as fast as possible.

Sinha: The finance minister can take a giant step and he can have a central GST. He can say, this is the central GST, and I have one tax for services, one tax for production, that's excise tax, and merge the two and say this is my GST, and let the states follow. So you tell the states that okay, we fix our rate of GST, and you fix your rate of GST. We should wait for the day when the two GSTs could be merged.

This much is already on the table but the UPA created apprehensions about the Union finance minister heading a GST council and appropriating powers which do not belong to the Centre. There is no need for a GST council. The empowered committee of state finance ministers implemented the Value Added Tax successfully. Let them implement the state GST equally successfully. So instead of creating doubts in their minds that the Centre is taking away their financial powers, let the Constitution be amended only partially, in the sense that some services should be transferred to the states so that GST becomes meaningful at the state level. And the Centre retains its power. The Centre needs to abolish the central sales tax and empower the states to levy taxes on services. 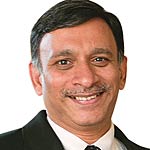 Vardhan Dharkar, CFO, KEC International
Dharkar: While there may not be much scope to reduce the tax rates, there is a need to widen the corporate taxpayer base. Only around 1,000 companies pay 80 per cent of the corporate tax and around half the companies do not file returns at all. Measures are needed to improve the tax administration and make it fair and transparent. While the plans to invest in infrastructure, both medium term and short term, drawn up by the government are ambitious, what is lacking is proper implementation. Less than half the targets are achieved. Steps should be taken to improve execution of projects. This needs clear policies for land acquisition and environment. The rupee should be made fully convertible. This will help Indian companies compete globally on an even footing. While taxing income from interest, allowance should be given for inflation. This will encourage savings. 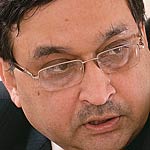 Sanjay Kumar Agarwal, Institute of Chartered Accountants of India
Agarwal: It is a well-known thing that when you reduce the tax burden then people will come voluntarily and pay the tax. One concern is that people paying more tax are being asked for more and more information by the (Income Tax) department but those who are paying very low tax are not being questioned. The second aspect is permanent sources of income: We need to concentrate more on GST. We need to work very fast because GST provides a cascading effect which can also address inflation.

Parikh: I think there is a fair degree of consensus here that GST should be pushed, agriculture marketing reforms should be done, expenditure reforms and targeted delivery, and reducing certain subsidies, rationalise fuel prices, devolution of power, including financial power, to panchayat level for implementing various schemes. Give a strong signal to reduce uncertainty that people face about medium-term government policies. Signal a determination to deal with corruption in an effective way, and inflation. Clarify land policies so that acquisition and other things become easier and less controversial.

Sinha: I think the general feeling is it might be more of the same. I am prepared to be pleasantly surprised by Pranab Mukherjee, if he could make some radical departure from past practice.

Listen to the discussion

Rough weather ahead for India Inc

Advice for Pranab on Budget 2011