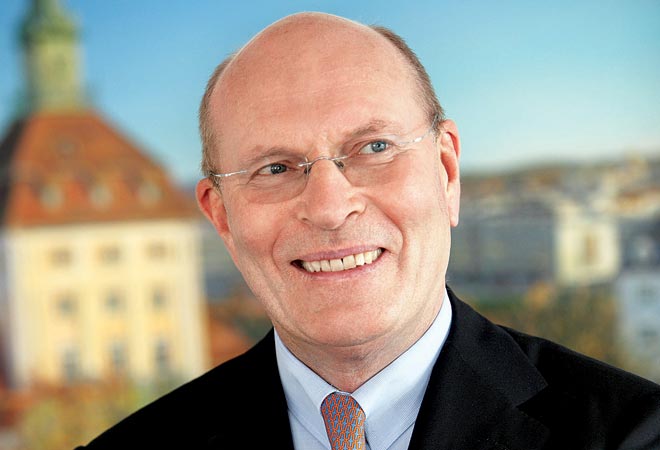 In 1971, Frank Stangenberg-Haverkamp was on a fun trip to India as a 23-year-old, driving down all the way from Germany, via Turkey and Pakistan. Since then, he has been a frequent visitor to India, either on business trips or just for plain fun. The Chairman of the Executive Board and Family Board of E. Merck KG was in Mumbai recently to partner the Maharashtra government on spreading awareness about diabetes. In a rare interview, the Merck chief shares his views with P.B. Jayakumar on the company's plans to focus on cancer research and their recipe for growth. Excerpts:

Q- Historically, very few privately held big corporations globally have survived beyond the third or fourth generations. What binds the Merck family together generation after generation?

A- I am from the 11th generation of my family, and we have 239 bloodline family members; 153 are the owners and have voting rights. All of them are descendents of the three sons of my ancestor (Emanuel Merck) who transformed Merck into an industrialised company in 1827.

E. Merck KG is the holding company of all Merck companies and it does not have any operating businesses. In 1995, we decided to bring external shareholders and diluted nearly 30 per cent of the total share capital and the rest (70 per cent) is with the family via the 'general partner' E. Merck KG. The interests and control of the family in running Merck is executed through a Family Board, Board of Partners and an Executive Board.

The Partners' meeting is like the Annual General Body Meeting of listed companies and it discusses the reports of the other bodies. It also elects the members of the Family Board every five years and has the powers to approve or reject changes in ownership structures or key business decisions.

The Family Board, which has 12 members, decides the basic strategic directions for the Merck companies and meets every month, besides communicating with the general partners from time to time on key business decisions. Its members are elected by the General Partners' meeting and are only members of the Merck family.

Q- So you have a complex but interesting family holding structure to control family interests in the company. How do you elect or groom your next generation for the top posts?

A- Just being from the Merck family does not qualify anyone for those posts. For example, currently my cousin and I are the only members from the family at the top posts of E. Merck KG. After studies, members will have to work outside for other companies till they reach at least a level of chief manager for joining Merck. If they are good, they can come up.

"Our focus is on making cancer drugs and biosimilars. It is also our strength"

Q- There is confusion among the general public, globally, over the two Merck companies - Germany-based Merck KGaA, and Merck & Co. in the US?

A- We are the original Merck, founded in 1668 in Darmstadt, Germany. In 1887, we started exporting to the US and an office was started in New York and, four years later, started a subsidiary Merck & Co. During the First World War, Merck & Co. was expropriated in 1917. Both the companies were separated and clear rules stipulate the rights to the name and the trademark. Merck Germany holds the global rights to the name and the trademark MERCK, except in North America. There we are represented by the EMD brand, which stands for "Emanuel Merck Darmstadt". Merck Sharp & Dohme is an American company known as MSD outside the US and Canada. It means they have to operate in other countries like in India as MSD.

Q- Coming to your business, despite being the world's oldest chemical and pharmaceutical company, Merck has not grown the way it could have when compared to other companies like Pfizer or GSK or BASF...

A- It should be seen from the background that we are a German company and an ethically driven value-based company and not Big Pharma. Unlike pharmaceutical companies, our business is spread into three areas, Healthcare (comprising Merck Serono, consumer health and biosimilars), which contributes to over half the revenues; Life Science (Merck Millipore); and Performance Materials (electronic chemicals, liquid crystals and pigments). Having said that, we are now in the process of growing and expanding, we have invested m32 billion in the last eight years alone in acquisitions. The latest was the US-based life science company Sigma-Aldrich for $17 billion (m13.1 billion). All acquisitions are key elements in Merck's "Fit for 2018" transformation and growth program aimed at strengthening the company's three growth platforms.

Q- In the healthcare business, your pipeline is dwindling. Revenues from existing blockbusters like Erbitux and Concor are diminishing. How do you plan to counter this?

A- I agree that our pipeline was not strong earlier, but that is changing. It is the same for all as drug development costs are rising on the one hand and regulatory benchmarks are getting stringent on the other. Our focus is on making cancer drugs and biosimilars (new versions of patent expired biotech drugs). It is also our strength. We are also building alliances like the one with Pfizer for developing drugs for various other therapeutic sectors, and with Dr Reddy's Laboratories for developing biosimilars.

Q- Do you regret your decision to hive off your generics business, bought by Mylan in 2007, considering that governments all over the world are promoting generics to reduce healthcare costs?

A- It was the right decision back then and we don't regret it. Generics is a different business altogether involving high volume, low margin and involves big competition from too many companies. It was not the main focus of our strategy and the decision to diverse from generics was right.