From Hollywood with love (and money)

America’s biggest studios are shaking and stirring the Indian market with exclusive releases and local co-productions.

“Do I look like I give a damn?”
James Bond (Daniel Craig) to a bartender who asks him if he wants his Martini shaken or stirred, in Casino Royale. 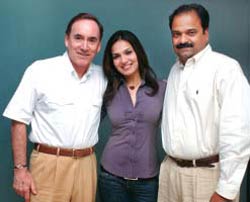 Richard Fox, Soundarya Rajinikanth and Blaise Fernandes
Agent 007 is changing. right from the early Bond flicks, one of the evergreen lines—on most occasions mouthed by Bond—has been: “A vodka Martini…shaken, not stirred”, or a variation of it. Until Casino Royale two years ago, when Bond breaks the mould and displays his disinterest in what was once his favourite tipple. In the latest Bond caper, Quantum of Solace, Agent 007 doesn’t even have his favourite introductory line: “Bond. James Bond”. Not around any more too are the gadgets (exploding attaché cases, bowler hats with a metal disc et al), and ‘Q,’ who would equip Bond with those outrageous gizmos.Bond has changed. He may not give a damn about his Martinis any longer, but he sure gives a damn about his Indian fans. So much so that Sony Pictures is bringing Commander Bond in Quantum of Solace to India on November 7, a week before the film debuts in North America. Who knows, the line, “Oh the things I do for England”, from You Only Live Twice, may well be replaced by “Oh the things I do for India”, in Bond flicks to come. Click here to Enlarge
If Indian audiences get to witness Bond’s latest hijinks before their American counterparts (the British still get the first glimpse of their home-grown secret agent, on October 31), it’s with good reason. Hollywood studios are embarking on emerging markets for higher growth. Not only have they begun to release films simultaneously in India and the US (or, as in the case of Quantum…, first in India), they’re also looking to co-produce films in India in local languages as well as with Hollywood stars, studios, technicians, directors and producers. Cross-cultural casting coups, like Naseeruddin Shah and Sadie Frost in Shoot on Sight, a film by Arun Govil, have become the order of the day. Hollywood films may still make up only 5-6 per cent of total box office revenues, but clearly the country’s demographic profile, increasing consumption and rising aspirations make India a market ripe for western entertainment fare (which can be localised and screened in the country’s burgeoning multiplex chains). Says Vijay Singh, CEO, Fox Star Studios, a joint venture between STAR TV and Fox Studios: “There are huge opportunities in the Indian film space. Revenues are likely to double from the current $2.2 to $4.4 billion (Rs 10,780-21,560 crore) by 2011.” Adds Farokh Balsara, Partner and Head of Media and Entertainment Practice at Ernst & Young: “Hollywood is taking note of the fact that India and China are markets for the future. It is a deliberate growth strategy for Hollywood Studios to look at expansion beyond their home markets. A reverse crossover is taking place.”

Indeed, the spotlight on India was cast much before the shadow of recession loomed over the US in the wake of the subprime crisis. As Sanford Panitch, President, Fox International Productions, points out, Hollywood may not feel the brunt of declining consumer spending.

Vijay Singh
"It's the entertainment and movie business that tends to do well in difficult times," says Panitch. It's expectations of brighter prospects in markets like India that persuaded Rupert Murdoch's Twentieth Century Fox to finally flag off its Asian operation, called Fox Star Studios, to produce and co-produce Asian language and Bollywood films in October. The Mumbai headquartered joint venture between two News Corp.-owned companies has announced a multipicture deal with one of Bollywood's ace Producer-Director Vipul Shah. To begin with there are two projects: A contemporary romantic comedy, and a visual effects-driven fantasy action movie.

Fox is a relatively late entrant into India. But the likes of Sony Pictures Entertainment (SPE) India, The Walt Disney Company and Warner Bros. Pictures India, who began by distributing Hollywood films, have steadily moved into production as well. SPE India was the first to tap Bollywood with the extravagant co-production, Saawariya. Although that film didn't set the cash registers ringing, SPE India has plans to co-invest in a clutch of Hindi films, in alliance with Eros International, an integrated Indian Media company involved in the production, acquisition and distribution of filmed entertainment content across all platforms.

Warner Bros. Pictures India, which has partnered with Ramesh Sippy Entertainment and Orion Pictures, is readying to release its first co-production, Chandni Chowk to China. Warner has also forayed into the animation genre with an untitled film directed by Jyotin Goel and produced by Geol Screencraft. The Walt Disney Company India's first Indian animation film Roadside Romeo, a co-production with Yash Raj Films, is awaiting release. As Siddharth Roy Kapur, CEO, UTV Motion Pictures, puts it: "Typically, Hollywood Studios have been present in India for years as distributors of their own films. But now to survive, these studios have to grow their pie in markets outside of the US."

Vipul Shah
To grow that pie, Hollywood is pretty clear that it has to marry with Bollywood. "For any international studios to participate in India's film entertainment growth story, you have to make Indian films," explains Panitch. "We are committed to building relationships in Bollywood and hope to add value to the creative production process. However, we will take a cautious but a committed approach to the business in India and across Asia," he adds. To be sure, it's not just Bollywood.read Hindi films.that is luring the big studios. Warner Bros. Pictures India is the first Hollywood house to announce its plans to co-produce films in the south with superstar Rajinikanth's daughter Soundarya Rajinikanth's company Ocher Studios. Three projects have already been finalised. "Given Soundarya and Ocher Studios' creative skills and deep understanding of the Southern film market and our marketing and distribution network, this is a perfect synergy," says Blaise Fernandes, Country Head for Warner Bros. Pictures India. Any bets on Bond turning teetotaller and learning to brew the best South Indian coffee in the years to come?