From vadas to Forts

Vithal Kamat sells everything from vadas that bear his name to luxury heritage hospitality. This is how he did it. 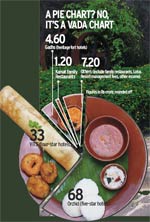 Click here to Enlarge
It is dinner time at Fort Jadhavgadh, Maharashtra's first heritage fort hotel, an hour's drive from Pune. Fifty-eight-year-old Vithal Venkatesh Kamat is flitting from table to table with the nervous energy of an expectant father. He introduces himself to guests with a folded hands namaskar, quickly figures out which part of the country they are from, switches languages and simply bowls them over. Like the man himself puts it, only partly in jest: "I can patao (charm) a girl in 14 languages." Kamat exhorts the guests to try out the Kamat Vada, which, he tells them proudly, he prepares himself.

The salt and pepper bearded Kamat is neither a waiter nor a chef, but the man who owns the Kamat Group of Hotels. He, however, has no qualms about his role, which extends from the restaurant floor to the corner room. "A Chairman has to be a good doorman first. The doorman is the first person you see (in a restaurant or a hotel)," he explains.

An hour later, Kamat is nursing a Scotch on the balcony of the 300-year-old fort. "I don't drink normally when I work. Fact is, this is my first drink ever at the fort. Moreover, this (the interview) is not work and look around... the setting is perfect, isn't it," grins Kamat. Yes, it is a perfect night for repose at Jadhavgadh. A cool September breeze is blowing, a fountain gurgles at a distance and Kamat's business is doing well. As business and tourist sentiment picks up, occupancy numbers are looking good at Jadhavgadh, and most other hotels owned by Kamat Hotels (India) Ltd, or KHIL, including Orchid, its flagship five-star ecotel or environment-friendly hotel.

Kamat Hotels' portfolio of hotels and restaurants is spread over 16 properties across five brands: Orchid (fivestar hotels), VITS (four-star business hotels), Lotus (luxury resorts), Vithal Kamat Family Restaurants and Gadhs (heritage fort hotels). "One of the positive things about Kamat Hotels is that they have a presence in every category and segment," says Rashesh Shah, an analyst with ICICI Securities, who researches the Kamat Hotels stock. "That diversifies their customer base and protects them from price volatility," explains Shah, who picks out the company among its peers as the really undervalued scrip.

The Kamat Hotels stock is up on market talk that American fund management company Clearwater Capital, which holds about 12 per cent in Kamat Hotels, might increase its stake to 33 per cent (Kamat does not rule out the possibility, but won't comment on specifics). But things have not always been this cushy for Kamat.

And to understand that, one needs to move away from the naturally air-conditioned climes of Jadhavgadh to Kamat's sanctum sanctorum in Mumbai. It's a small dusty room, some 20 feet below ground level of the Kamat Group of Hotels' flagship property, Orchid. "Back in 1996-97, when Orchid was being constructed, I used to live here," recalls Kamat. Those were tough times for Kamat. His family business of Kamat eateries had split; he had run up a debt of Rs 200 crore; and all he had to show for it was a half-built hotel (Orchid).

Yet, this room is where some of Kamat's prized possessions and memories lie: A photograph of the late legendary journalist and Kamat's guru, Behram 'Busybee' Contractor, a framed handwritten letter in Marathi with two Rs 100 notes - it's from an inmate of the Paithan prison (near Aurangabad), thanking Kamat for an inspiring autobiography. "For him to make that Rs 200 would have taken nearly six months of work at the prison, and yet he sent it to me," says a grateful Kamat. The book, Idli, Vada and Me, has been translated into a dozen languages and is a bestseller in Marathi and Gujarati. It's a racy and candid read that is refreshingly Indian in soul and style. From a martinet father, who believed that a hard slap teaches more than a loving discourse (Kamat hero-worships him), to dancing in roadside cafés in Europe in his salad days to get by; from building the Kamat chain of eateries with his father and brothers to his burning ambition to look beyond the restaurant business (which he partly blames for the subsequent family split); from contemplating suicide to finally opening Orchid in 1997, Kamat airbrushes nothing and that's what makes the book a page-turner.

Since opening Orchid, Asia's first ecotel, Kamat has not paused. Today, Kamat Hotels has revenues of Rs 113 crore - not exactly a Taj or even a Leela in size - but pretty impressive for a company that started largely with one half-built hotel (albeit on prime Mumbai property) and steeped in debt. How has Kamat funded this growth? A one line answer would be: management contracts and long term property leases.

"This is a very capital-intensive industry. Rather than buy properties that are ideal for high-end hospitality, it makes sense for us to focus on building brands (like Orchid, VITS) and take properties on long leases or management contracts," explains Kamat. "Constructing a brand new property is a costly exercise. So is redeveloping an old one. Our expertise is hospitality not construction," adds Kamat. Therefore, most of its 16 up-andrunning properties, with the exception of Orchid and VITS Mumbai, are either on long leases or are managed by Kamat Hotels for others. That partly explains why the company has revenues of just Rs 113 crore despite having such a large portfolio.

For its VITS properties, the company prefers to sign 20-year leases while for the heritage forts, Kamat signs on 60-yearlong leases. It took nearly 19 months for the company to renovate Fort Jadhavgadh before it opened its doors to guests in early 2008. Suites in Jadhavgadh cost between Rs 10,000 and Rs 24,000 a night. Kamat says that all weekends till October end are booked. "We have signed on six such heritage properties (mostly on 60-year leases) in Maharashtra and Orissa," adds Kamat, who hopes properties like Jadhavgadh will clock Rs 20 crore in revenues in a few years.

"In the future, we can expect a lot of growth in the Vithal Kamat Family Restaurant model. Given the lower ticket investment required to set up these restaurants (as compared to a four- or five-star hotel), we are hoping to scale up a lot here using the franchisee route," says Kamat's son Vikram, 25, Executive Director of KHIL, who has been a part of the business for the last five years. Currently, the number of such restaurants is 32. In a year and half, Kamat expects them to be around 150.

Analysts like Shah like this model. "Given the fact that the company is a small one, this model ensures that there is no significant capital outlay. It helps the company grow geographically, and build a brand without stretching the balance sheet." People close to Kamat reveal that growth has always been a priority for the man, even in tough times. Apurva Muthalia, Senior Managing Partner with ILFS Investment Managers, has known Kamat for almost 25 years. He even worked with Kamat Hotels, in the project finance division, for a brief while in 1999-2000. "Those were tough times for Kamat," recalls Muthalia. "The company was heavily in debt, and yet Kamat would be looking out for new projects. It's hardly surprising that the company has grown this way," says Muthalia.

And more growth is on the way. By the end of the year, Kamat Hotels would have added 128 rooms to Orchid in Mumbai and another 310 odd rooms at its partially operative VITS and Orchid properties in Pune. Kamat Hotels' expansion comes with a bill - debt of Rs 400 crore, close to four times its annual income. Market watchers, though, are not unduly concerned. "Maybe a year ago, when occupancy levels were down, that was a concern. With more rooms coming in the lucrative Mumbai market, that should not be an issue," says ICICI's Shah. Moreover, the company holds half a dozen properties in places like Baddi in Himachal Pradesh, Amaravati in Maharashtra, Coimbatore in Tamil Nadu, which it plans to parcel and sell to ease the debt burden.

At Jadhavgadh, Kamat breaks into a dance even as he loudly sings If I were a rich man and poses for a photograph with a young guest. "Now, she (the guest) will go back and tell everybody what a good time she had at this place and everybody from her colony will come," says Kamat.

"Kamat is a genuine people's person. He is a great marketer, a pioneer. He started Orchid as an ecotel way before it was cool to be environment friendly. He set up restaurants on highways before highway development become such a big thing," says Muthalia. The Jadhavgadh hotel stakes claim as the world's first museum hotel, and has household artefacts that go back 400 years. Kamat's next big plan is to kick-start birdwatching. "India is home to 1,400 bird species in the world. Globally, it's a huge industry ($29 billion just in the United States). I don't see why we can't grow that industry," says Kamat, whose visiting card encloses a basil seed. The idea: even if somebody throws the card away, it could plant a tree. The resorts in Orissa, which have some of the largest number of migratory birds in India, are a means to bootstrap the birdwatching industry in India. Also on Kamat's cards is a clean-up of Lake Chilka in Orissa, the second-largest coastal lagoon in the world.

It looks like this man, who is a fourth degree black belt in karate, who speaks several tongues, who can be spotted with a band of volunteers cleaning up the beaches of Mumbai every year the day after Ganesha idols are immersed at sea, has found himself a new cause. And a new niche to make money.
TweetYoutube

Farmers in the boardroom