Where the fault lies

Vishnu Vardhan, 24, had never bargained for this when he decided to turn entrepreneur. A fresh management graduate from Wales in the United Kingdom, he set up a small unit in Coimbatore, Tamil Nadu, six months ago to make motors. First, he found himself facing 10 hours of power shutdown every day. Then came another shock: there would be a second weekly 'power holiday', starting March 1. Industrial consumers would get power only five days a week. "I am managing with a diesel generator set rented at a cost of Rs 2,500 for seven hours," he says. The additional expense has increased his costs, apart from adversely affecting production.

The story is the same with most small manufacturers in Coimbatore. It is even worse for makers of tiny components, most of whom cannot afford the added expense of running diesel sets. For the likes of Vardhan too, diesel sets can only be a temporary recourse, since their power costs between Rs 15 and 19 per unit, while grid power costs Rs 5.

The situation in Coimbatore is a microcosm of what is happening across Tamil Nadu. The state, whose power sector was reasonably well managed till 2004, has seen a reversal in recent times, with peak shortage touching 2,886 megawatts (MW) in February, or 24.3 per cent. Even a year ago, in February 2011, the peak shortage was 865 MW, or 7.7 per cent.

The situation in the rest of South India, or any other part of the country, is no better. Like Tamil Nadu, Andhra Pradesh too has enforced two weekly power holidays for industries.

Agriculture has also been hit, with the state unable to supply sufficient power to pump water to the fields, after the north-east monsoon failed last year.

"The fill rate, or the extent to which shop shelves are restocked following sales, slipped to 90 per cent in February for vegetables and rice, from 96 per cent earlier," says S. Jagdish Krishnan, COO, Retail and Bakery Divisions, Heritage Foods,

In Karnataka, the tribulations of the Toyota Kirloskar Motor auto plant on the outskirts of Bangalore, tell a typical story. Every time the power supply trips, a bunch of cars under production turn into scrap.

In the next six months from September, it has lost a staggering 830 vehicles worth Rs 56.9 crore. Karnataka has declared a weekly holiday for industries and banned private generating companies from selling power outside the state.

Why has this situation arisen?
Not for lack of new generation projects. The country is estimated to have added fresh capacity of 53,922 MW during the Eleventh Five-year Plan period, which ended in March, more than twice the amount of 21,180 MW, added during the Tenth Plan.

But all the new plants are working below capacity because they are not getting enough coal or gas.

"The total capacity of power projects impacted by fuel issues would be around 43,000 MW," says Ashok Khurana, Director General of the Association of Power Producers (APP), and former additional secretary in the power ministry.

The coal shortage in the country in 2011/12 was around 54 million tonnes, the generation loss due to which was 8.73 billion units in the first 11 months up to February, says an estimate of the Central Electricity Authority (CEA).

In the same period during the last financial year, the loss was 6.87 billion units. On the last day of February, 34 thermal plants across the country had coal stocks for barely a week. Coal shortage has dogged the country for years, but power producers claim this level of scarcity is unprecedented.

The Centre finally acted in the first week of April, issuing a Presidential directive to Coal India Ltd (CIL) - which provides the bulk of domestic coal supply - to meet 80 per cent of its supply commitments to the power sector, under the pain of penalty.

Earlier, milder efforts to pressure CIL had not worked: a late February initiative by the Committee of Secretaries, for instance, to get CIL to sign fuel supply agreements with the new projects commissioned during the 11th Plan period came to naught, as the company's independent directors opposed it strongly.

"The state governments need to address the power problem, though we are trying our best to help them," says Union Power Minister Sushil Kumar Shinde. (See also www.businesstoday.in/coalshortage.)

There is little hope from natural gas either.

Gas plants in the South are already operating at half their capacity, while production at the KG D6 basin in Andhra Pradesh has been steadily falling for the last two years and now stands at 34 million metric standard cubic metres per day (mmscmd).

"The availability of gas from KG-D6 is expected to continuously decline in 2012/13 and 2013/14," Jaipal Reddy, Union Petroleum and Natural Gas Minister, told the Rajya Sabha on March 20.

On March 19, the CEA issued an advisory asking developers not to plan any gas-based projects till 2015/16, since no additional domestic gas will be available till then. 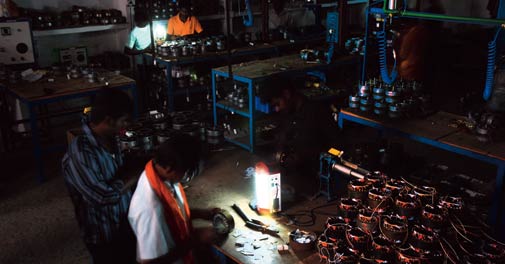 Workers at a small scale unit in Coimbatore using battery-powered lamps during a power cut.
Worse, most state-owned distribution companies are in such bad shape they cannot afford to buy more power, especially if power producers seek slightly higher tariffs. The actual cost of generation at the first unit of Tata Power's Mundra ultra mega power project in Gujarat has shot up after coal imports became more costly, but the states buying its power have refused to absorb the extra cost.

All stakeholders have turned cautious. The APP points out that 50 per cent of power sector loans sanctioned have not yet been actually drawn by the loan seekers. Even the big guns among consumers are hedging their bets.

"We will not be adding capacities in the manufacturing facilities where power cost is a significant component of product cost," says Mithun Chittalappilly, Executive Director of the Rs 1,000-crore, Keralabased V-Guard Industries.

Are there any solutions?
One way out is that used by the Opto Circuits plant in Bangalore, which has eschewed grid power altogether, spending Rs 25,000 per day instead on diesel. "We don't use grid power at all as any interruption in power supply will damage our machinery," says Muniswamy Srinivas, Finance Head, Opto Circuits. But given the high cost of diesel power this remains an unfeasible option for most.

"Countries such as Thailand, China and South Korea supply cheap power to industry to push up exports," says energy expert V. Raghuraman. "How will Indian manufacturing compete with these countries in the global marketplace?"

One small section of industry, however, is smiling: the manufacturers of diesel generator sets and inverters. V Guard also makes inverters, the sales of which shot up 340 per cent in the first 11 months of 2011/12, compared to the same period last year. "We are not able to meet the demand," says Chittalappilly.