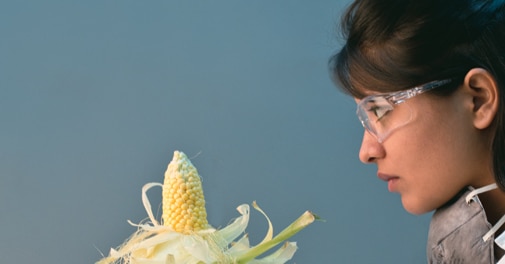 During a visit to India in March 2005, Norman Borlaug - widely regarded as the father of the Green Revolution - supported producing genetically modified (GM) food to eradicate hunger from the world. "It is better to die eating GM food instead of dying of hunger," said the Nobel laureate, who passed away in 2009.

Nine years after the American biologist who helped save millions of people from starvation made that comment and 12 years after the first non-food GM crop was planted in India , the country has yet to approve commercial cultivation of a GM food crop. In fact, India is still debating allowing field experiments for GM food crops and only recently removed a year-long embargo on scientific trials. This is despite India emerging as the fourth-largest country to grow GM crops in 2013, with farmers planting Bt cotton on about 11 million hectares of land. Commercial cultivation of Bt cotton started in 2002, and the fibre remains the only GM crop to be commercially grown in the country.

Naturally, the proponents of GM crops are unhappy with the slow progress. "While farmers in our fellow emerging nations Brazil and China access the latest cutting-edge agri biotechnologies and six million Indian farmers once again plant hybrid Bt cotton seeds on over 90% of cotton acres, it has been quite a few years since India approved any new agriculture biotechnology for farmers," says Gyanendra Shukla, Managing Director of Monsanto India, a unit of the US agribusiness giant.

While more clarity on the future of GM crops in India will come once a new government is formed after elections that end in May, the outgoing government has set the ball rolling. The Genetic Engineering Appraisal Committee (GEAC), a wing of the environment ministry, approved field trials for 11 crops in March. These include crops such as maize, rice, sorghum, wheat, groundnut and cotton.

The GEAC's decision came a couple of weeks after Veerappa Moily, who took over as environment minister in December last year, reversed his predecessor Jayanthi Natarajan's stand on the issue. Moily's appointment as environment minister has had a side effect, too. Shares of Monsanto India have doubled since December while that of BASF, another leading GM technology player in the country, have jumped more than a fourth.

Natarajan had decided against trials in the wake of a Supreme Court case on field trials and regulatory regime in GM crops even though there was no explicit order to do so. The case was filed by civil society group Gene Campaign and activist Aruna Rodrigues, who had sought a blanket ban on field trials. A court-appointed expert panel to study the matter had suggested an indefinite moratorium on trials of GM crops unless shortcomings in the regulatory process were plugged. However, one committee member had given a dissenting note on the moratorium. The government has challenged the panel's recommendations and the apex court is likely to take up the matter later in April.

Natarajan's predecessor, Jairam Ramesh, also wasn't very supportive of GM crops. Ramesh had, in February 2010, stopped the commercialisation of Bt brinjal owing to a lack of consensus among scientists and opposition from brinjal-growing states. Ramesh said at the time that the moratorium was imposed to allow scientific studies to establish the safety of the product from the point of view of its long-term impact on human health and environment. He also suggested setting up a biotechnology regulatory authority. This authority has yet to be set up. A Bill introduced in parliament proposing to set up such a regulatory agency will lapse with the dissolution of the 15th Lok Sabha. Gyanendra Shukla, Managing Director, Monsanto India, says: GM food has been safely cultivated and consumed across the world, including tomato (China), papaya (the US, China), corn (16 countries), and squash and zucchini (the US). Similar results have been experienced by Indian cotton farmers. (Photo: Nishikant Gamre)

Meanwhile, neighbouring Bangladesh has recently approved commercial cultivation of Bt brinjal. This has fuelled concerns that the crop could slip into India through West Bengal, which also happens to be the biggest brinjal producing state in the country.

While the environment ministry had been opposing GM food crops until recently, not everyone in the government had the same opinion. On February 3, weeks before Moily allowed field trials of GM crops, Prime Minister Manmohan Singh said the government was committed to promoting the use of GM technologies for agricultural development. "While safety must be ensured, we should not succumb to unscientific prejudices against Bt crops," he said in a speech at the Indian Science Congress in Jammu.

Also in February, Agriculture Minister Sharad Pawar said opposition to the GM technology will affect the morale of the scientific community. He said the government was not against GM crops but added a rider. "We want to continue field trials. Simultaneously, we are ready to take all precautions? GM crops will be released only after full satisfaction on the assessment of their impact on plants, animals and human beings," Pawar said at an event in New Delhi.

The decision to allow trials has invited criticism from political parties. The Arvind Kejriwal-led Aam Aadmi Party has demanded that all field trials be stopped. Civil society groups have also opposed the move. They argue that GM crops pose risks to human health as well as the environment. Activists say that genetic modification of crops has increased the use of herbicides by farmers, which has raised health concerns because of the possibility of a rise in the level of toxic chemicals in food products. GM crops also harm the soil and some insects that help farming, they say.

Rajesh Krishnan, Convenor of the Coalition for a GM-Free India, alleges that Natarajan was removed from the environment ministry to push projects, including GM trials, pending for want of environmental clearances. "We are urging people to vote for political parties who are against the concept of GM food. We should have a need-based assessment of GM crops since the technology is irreversible once it gets released into the environment," he says. Suman Sahai, Chairperson of Gene Campaign, echoes the view. "The decision of allowing trials is a reckless move. Our country is taking up indiscriminate GM programme without realising the purpose it will serve. We do not blindly oppose this technology but it cannot solve all problems of agriculture," he says.

Biotech companies have allayed these concerns. "GM food has been safely cultivated and consumed across the world, including tomato (China), papaya (the US, China), corn (16 countries), and squash and zucchini (the US). Similar results have been experienced by Indian cotton farmers," says Shukla of Monsanto.

Shukla says research trials could begin as early as the forthcoming kharif crop season that begins in the summer months. "We will be filing new applications for field trials in 2014 planting seasons," adds K.C. Ravi, Vice President of Commercial Acceptance and Public Policy for South Asia at Syngenta, a Swiss chemicals and biotech company.

Ravi says Syngenta is working on technologies in maize that intend to provide protection from insects and help control growth of weeds. These technologies will help reduce any loss in yields, thereby increasing profitability for farmers, he says. Countering the claims of activists, Ravi says that GM food and feed products are the most extensively tested and regulated in the entire food sector. "Testing by independent public authorities and scientists throughout the world continues to demonstrate that approved GM plants are just as safe as, or safer than, conventional varieties."

The Indian research community is also supportive of GM field trials. Research bodies say that the regulatory mechanism in India is adequate and that the government can reject a GM crop for commercial cultivation if field trials find the product is not suitable for the environment or human consumption. Virander Chauhan, the New Delhi-based Director of International Centre for Genetic Engineering and Biotechnology, says the GM technology is easy to adopt and relatively inexpensive. "Scientific concerns related to the GM technology are not at all justified. There is ample evidence in the literature and in the fields that, scientifically, GM crops are entirely safe," he says.

The Ludhiana-based Punjab Agriculture University has conducted field trials of cotton and corn for companies including Monsanto and Syngenta. S.S. Gosal, Director of Research at the university, says biotechnology is an important way to ensure food security by increasing production. Gosal, whose research field also happens to be biotechnology, says people in India are already consuming insecticides indirectly when they eat vegetables. "A brinjal crop normally requires up to 30 sprays of insecticides. This goes into the human consumption indirectly. If we grow and consume Bt brinjal, we will consume some of the genes that have been built into the seeds to make the crop pest- and herbicide-resistant," he says. "Ultimately, we have to see which of the two is less harmful for consumption."