The government's push for ambitious infrastructure spending is constrained by the country's historically low tax base.
by Dipak Mondal | Print Edition: February 28, 2016 The core of government's economic strategy is investment-led, and not consumption-led, growth. However, its plan to invest heavily in infrastructure is being hit by country's extremely low tax base. (Photo: Ajay Thakuri)

The National Democratic Alliance (NDA) government says the core of its economic strategy is investment-led, and not consumption-led, growth. However, its ambitious plan to invest heavily in infrastructure is being hit by a resource crunch, at the heart of which is the country's extremely low tax base - the proportion of people out of the total population that pays taxes (see A Narrow Base).

A lot of income and business activities in India go unreported. Due to this, the government loses a significant tax revenue, both direct and indirect. This is the reason for the country' low tax-to-GDP ratio of 9-10 per cent over the past five years. Brazil's tax-to-GDP ratio is 14 per cent. The figures are 15 per cent for Russia and 25 per cent for South Africa (as per World Bank data). India's peak was 12.5 per cent, touched in 2007/08.

While the government has budgeted for capital expenditure (spending for creation of long-term assets) of Rs 2.4 lakh crore for 2015/16, 25 per cent more than the 2014/15 revised estimate of Rs 1.9 lakh crore, it has not reduced revenue expenses. Its total expenditure in 2015/16 is estimated to be Rs 17.77 lakh crore, 5.7 per cent more than the 2014/15 revised estimate. However, shortage of sources from where it can raise additional taxes means that it has been able to budget for only 1.35 per cent increase in revenue (tax and non-tax) to Rs 11.4 lakh crore, leaving a gap of Rs 6.24 lakh crore between revenues and expenses. It is this lack of options that is restricting its ability to spend as much on infrastructure as it would like to.

Though experts say that the tax-to-GDP ratio varies a little because of economic growth, the government will have to take serious steps to increase the tax base if it has to meet its long-term development commitments. "It is a cyclical thing. When growth improves, tax revenues go up, and when growth falls, tax revenues go down," says Arvind Virmani, a former chief economic advisor and Planning Commission member. However, to tackle the issue in the long run, there is a need to simplify tax laws to increase compliance, he says.

Most experts and analysts echo Virmani's view. Ganesh Raj, Partner, Tax & Regulatory Services, Ernst & Young, says many tax incentives to companies not only lead to loss of revenue but also litigation. For companies, the effective tax rate is 23 per cent compared to the headline rate of 30 per cent, due to exemptions and deductions. Corporate tax exemptions led to a revenue loss of Rs 63,000 crore in 2014/15. The government has announced a road map for removing exemptions and reducing the corporate tax rate from 30 per cent to 25 per cent by 2018/19.

Raj believes the government will axe many exemptions but may not cut corporate tax in this year's Budget. Virmani, however, cautions against tweaking laws just to increase tax collections in the short term. "Tax reforms should ideally be revenue neutral. They should increase collections over the long term through increased voluntary compliance," he says.

The goods and services tax (GST), a uniform indirect tax that will apply across the country, is one of the biggest tax reforms attempted by the government. However, the GST Bill is pending in Parliament due to lack of political consensus.

K.R. Sekar, Partner, Deloitte Haskins & Sells LLP, stresses the need for proper capturing of income and business data. He says the government must look at the Parthasarathi Shome Committee report on tax administration reforms. The committee has recommended a common business identification number for use by all departments - income tax, customs, central excise, service tax, etc. It has also suggested single registration for both central excise and service tax.

Economists warn against over-reliance on indirect taxes to make up for revenue shortfalls. "The public finance theory says the government should rely more on direct taxes than indirect taxes as the latter do not discriminate against taxpayers on the basis of income," says Sunil Kumar Sinha, Principal Economist and Director of Public Finance, India Ratings and Research.

Though experts say that the tax-to-GDP ratio varies a little because of economic growth, the government will have to take serious steps to increase the tax base if it has to meet its long-term development commitments

The government had plans to raise Rs 69,500 crore this year by selling its stake in public sector companies. But the finance ministry says this will at best get it `30,000 crore. The only way the government can fill the revenue-expense gap is through debt, but even here it does not have much choice given the stiff fiscal deficit targets it has set for the rest of its tenure - 3.9 per cent of the gross domestic product, or GDP, for 2015/16, and 3 per cent by 2017/18. The fiscal deficit was Rs 5.56 lakh crore in the first eight months of 2015/16, 87 per cent of the yearly target. The government has till date raised just 50 per cent tax revenue it has budgeted for (after deducting the share of the states).

In 2015/16, the government could still afford higher spending on infrastructure projects, mainly due to savings from the sharp fall in crude oil prices. Brent crude fell from $55 a barrel in April 2015 to $34 a barrel in January 2016, which has made the task of keeping the fiscal deficit within target easier. Falling oil prices helped the government save 42 per cent on its oil import bill in the first nine months of the financial year. 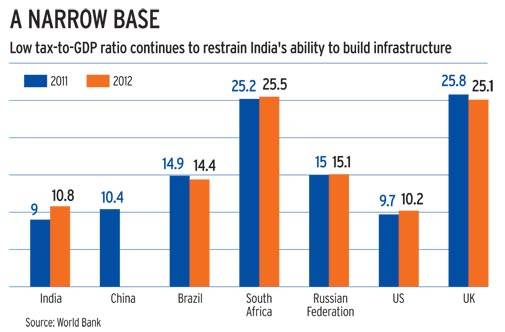 Most of these positives may be missing in 2016/17. There are few chances of further sharp fall in oil prices. It is to be seen if the government increases the excise duty from 12 per cent to 14 per cent, as it did with service tax last year, to move closer to the proposed GST rate of 18 per cent.

While there is limited scope for raising revenue, the government will have to deal with many one-time expenses in 2016/17. For example, the Seventh Pay Commission implementation will mean an additional burden of Rs 72,000 crore. The government may also have to recapitalise public sector banks. According to an India Ratings report, it will have to inject `34,000 crore into public sector banks every year till 2018/19.

But the biggest challenge is the enormity of funds required for building infrastructure. Even after a 25 per cent increase in the 2015/16 Budget, capital expenditure as a percentage of GDP continues to be only 1.7 per cent, which experts say should be above 2 per cent.

Sinha of India Ratings and Research says, "In absolute terms, the government may have increased the allocation for infrastructure, but as a percentage of GDP, it has been around 1.7 per cent since 2011/12, and this is a cause for worry."

Meanwhile, economists caution against any indiscretion in expenditure. D.K. Joshi, Chief Economist, Crisil, says, "The fiscal space is limited. Therefore, the government has to be more discreet in spending. It will have to select sectors or areas where it gets more bang for the buck, and which have a higher multiplier effect." Virmani says there is a need to get fiscal and monetary policies right.

Though a section of analysts and industry is in favour of the government compromising on fiscal deficit targets for spending more on infrastructure, this course may put the country's ratings under pressure and narrow the room for monetary easing. Only the Budget can bring some clarity on whether the government takes this path or not.

Twitter Troubles: A look at the challenges plaguing it