Deal (Or No Deal)

Conventional wisdom says a place would smell of Maggi if it is inhabited by a single man or a handful of children. Ankur Warikoo, a 31-year-old married man, has added a third scenario to it. The aroma of Maggi permeates the air in the first floor office of Crazeal in New Delhi's East of Kailash. Warikoo, its CEO, is crazy about Nestle's instant noodle.

As a result, the staff breaks for frequent Maggi meals served by the kitchen at the far end. Even between the mini-meals, the office wears a relaxed, casual look, like a start-up.

"We are a start-up and we work like one," says Warikoo.

In saying so, he defies another conventional wisdom. For, Crazeal is not really a start-up. It is the Indian arm of the US-based online dealmaker Groupon, which made $16.24 billion in gross billings last year and raised more than $700 million in an IPO in early November.

Snapdeal has more than 68 per cent of the coupon business
Click here to Enlarge
A portmanteau like the parent, whose name combines group and coupon, Crazeal (crazy+ deal) did not start in a garage, nor from scratch in any other way.

Groupon bought SoSasta, a Kolkata-based website offering cheap deals, in January last year and renamed it Crazeal, a name it settled for because someone else is squatting on Groupon.in.

Crazeal follows the model Groupon pioneered in 2008: tying up with local, regional and national merchants to offer "deals" to consumers, often at a significant discount to the market price.

MUST SEE:Tips to set up your business online

The website keeps a percentage of the price - usually 30 to 40 per cent - as commission. It is a good place to be, as daily deal websites comprise India's fastest-growing web vertical, according to online research outfit comScore, growing 629 per cent to 7.6 million unique users a month in November 2011. 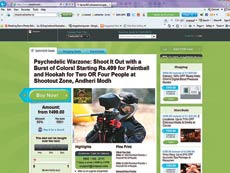 As Groupon triggered and rode the daily deals wave in the US, Indian entrepreneurs quickly replicated the model and now have quite a head start. Snapdeal lords it over two-thirds of the Indian Internet traffic that goes to deal sites. Mydala is a distant second, with about a sixth of the traffic, putting Crazeal firmly in the third place. Some 20-odd companies fight for the little leftover traffic.

To make matters worse, there has not been a lot of good news coming from home. Warikoo likes to compare Groupon with Internet search giant Google. "We had the second-largest Internet IPO in history after Google," he says with pride (Facebook will top that list soon).

But, unlike Google, Groupon did not declare a profit in the first quarter after listing. On the contrary, it declared a loss of $42.3 million. Its stock has lost a quarter of its value since listing.

BEING DIFFERENT
Not many regular online deal-seekers are familiar with Crazeal. Shraddha Sinha, who works with an executive search firm, frequents FashionandYou and 99labels but has not heard of Crazeal. Many of those who have are mercenaries. Like all online deal hunters, they bounce from tab to tab on their browser searching for the best deal. It does not matter where the deal comes from so long as it is good. And here is the third shot Warikoo takes at defying conventional wisdom. Opening Mydala's page on his laptop, Warikoo puts his finger on the site's "Rs 49 deal-of-the-day" offers. "People visiting these sites are dealchasing customers. These are not the users we target," he says.

Instead, Crazeal takes interested buyers to a page giving multiple deal options from the same merchant and buyers frequently go for a "more expensive" deal. A recent travel deal for a hotel in Pondicherry attracted 60 buyers in three days, 43 of whom chose the higher tariff plan of Rs 11,990, about Rs 2,000 more than the cheapest offer.

Choosing deals is the biggest challenge for Warikoo and his business development team of three persons. Of the 400 or so deals on the Crazeal website, only one is run as the dealof-the-day at the centre; the rest appear on a bar on the right. Maintaining a decent deal pipeline is also a challenge.

In a crowded market, one way to get ahead of the pack would be to break the mould. Realising this, one of the first things Warikoo did after joining Crazeal was to partner with eBay India to increase visibility. Clicking on the 'myCity' tab on eBay India takes you to Crazeal.

"Lifestyle is one of the fastest growing areas online," says Muralikrishnan B., Country Manager, eBay India. "An increasing number of users are looking to get tattoos and eat at local restaurants," he says, pointing out that eBay India users, with the Crazeal tie-up, can now get a complete suite of services.

Merchants seem happy with how Crazeal is improving their business. The Crowne Plaza Hotel in New Delhi's Okhla area, recently advertised a deal for unlimited alcoholic beverages for Rs 1,000 on Crazeal. "It is significantly better than Snapdeal," says Puneet Saigal, the hotel's food and beverages manager, about his new online vehicle.

Those watching the space believe that deal websites are leaking money. Arvind Singhal, Chairman of Technopak Advisors, a retail consultancy, says there is not enough space for 25 such companies, may be four to five at most. Some think Snapdeal and Mydala, which started operations back in 2008/2009, are here to stay. Mydala.com
Talking about how fast Mydala has grown, Anisha Singh, its founder and chief executive, says she has had to move into a larger office. As for competition from foreign-funded competitors, she pooh-poohs the threat. "There is a lot of headroom for e-commerce companies to grow in India."

MAKING THEM STICK
Warikoo acknowledges the odds, and the fact that Crazeal is just about on the podium, but with a positive spin. "We are already number three in terms of unique visits," he says. 'Unique visits' is a measure of the number of people viewing the site and not of sales. However, the higher the number of unique visitors the more likely they are to open their wallets.

Stickiness - getting users to come back to the site over and over again - is a challenge. It is a challenge Warikoo claims he is cracking. Fortyfive per cent of his traffic, he says, is repeat traffic.

Crazeal has now moved to Groupon's global technology platform. That will help it link deals originating from India to those from the other 46 countries where it operates. It will also protect Crazeal from the kind of crisis it suffered soon after acquiring SoSasta, when the website's user data base was leaked.

It is not that the rivals are napping. Both Snapdeal and Mydala are investing heavily in technology. Mydala is investing most of the $8 million raised from venture firm Tiger Global Solutions in its marketing and back-end.

Warikoo, though, believes that being different will take him far. "We have a different mindset. We have a clear mandate to be self-sustained."

Until then, Warikoo, who left consultancy firm AT Kearney three years ago to turn entrepreneur, can enjoy the start-up experience.
TweetYoutube