Who's Afraid of Narendra Modi? Reaching out: Modi with a group of Muslims who joined the BJP in Ahmedabad on his birthday in September. PHOTO: SHAILESH RAVAL

Zakir Hussain thought of leaving Gujarat in 2002 after two of his restaurants were burnt down in some of India's worst religious riots since the Partition. Frightened for their lives, the Gujarati businessman and his family were holed up in their Ahmedabad home for an entire week even after the violence was over. "I do not know who did what. My business was lost, I had made up my mind to wind up and look for a safer harbour," he says. "But I remember, it was my mother who refused to leave, and we stayed back."

Hussain says he's glad he stayed back. Today, he runs one of Ahmedabad's most popular Mughlai food restaurants called WoW, a fine dining place with a terrace barbeque a stone's throw from the city's heritage Ellis Bridge. Business has been good and the restaurant is packed most evenings. It isn't the only one: the Hussain family's seven other restaurants and two budget hotels in Ahmedabad are also thriving.

DESPITE MODI'S EFFORTS, HE REMAINS A DEEPLY POLARISING FIGURE AND MUSLIMS ARE STILL A MARGINALISED COMMUNITY IN GUJARAT

For hundreds of Muslim businessmen in Gujarat such as Hussain, the 2002 riots were a watershed moment. Many of them migrated from the state altogether, while those who stayed back had to virtually start their businesses again from scratch. More than a decade on, some Gujarati Muslim businessmen say they have succeeded in rebuilding their lives in part because of the state's investor-friendly economic development model. They disagree with Chief Minister Narendra Modi's politics, but say he has cut red tape, made the administration more responsive and lured many companies to invest in Gujarat.

Although many Muslims in Gujarat do not speak openly for fear of reprisals, Business Today spoke to about 10 Muslim businessmen in various sectors who said Modi's governance and ability to take decisions made him stand out amongst all chief ministers. "Law and order is under control, people move freely, I no longer have to pay hafta to anyone. Things related to government have become simpler and transparent. I can freely concentrate on my business," says Hussain. "I may not love Modi, but I will vote for him. 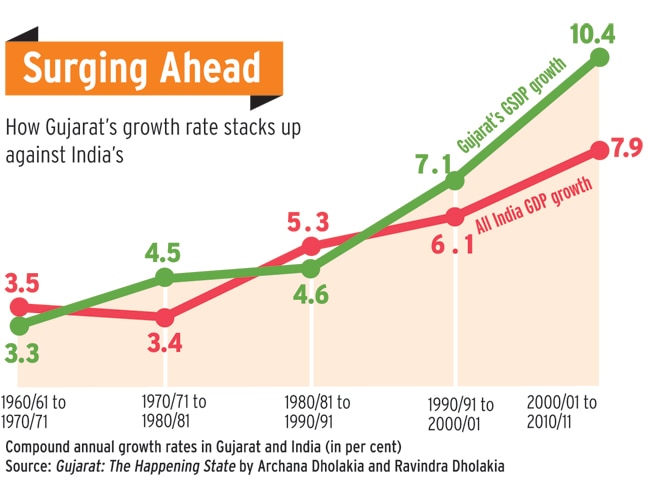 Economists are split on the economic model adopted by Modi. Some say it has reduced poverty levels in the state of about 60 million and the nine per cent Muslims are among the beneficiaries of the boom.

To be sure, growth in Gujarat has outpaced the national economy in recent years. The state's economy grew about 10 per cent a year between 2002 and 2013 while the country's economic expansion slipped from near double-digits to five per cent levels during this period.

But critics say some states such as Tamil Nadu have grown at an even faster pace. Moreover, the fruits of economic development have not touched the poor and disadvantaged in Gujarat, which lags other states on social indicators such as health and education.

"Gujarat is behind, particularly on the social side - lower educational pace, lower life expectancy, greater gender inequality, a busted healthcare system and that has not worked so well," Nobel Prize-winning economist Amartya Sen said at a media programme this year. "What has been rather efficient in business has not been so efficient on things that we are trying to concentrate in India - to have a healthy, educated labour force."

As India heads closer to a general election, one question several people are asking is: are Muslim businessmen in Gujarat afraid of Narendra Modi or are they veering around to engage with the Bharatiya Janata Party's (BJP) prime ministerial candidate?

Zafar Sareshwala, Modi's backroom man and CEO of Parsoli Motors, which sells BMW cars in Gujarat, says Muslim intellectuals are tentatively engaging in discussions with Modi. Sareshwala, who lost his business after rioters ambushed his office in 2002 but has rebuilt it since, filed cases against Modi and the then home minister, L.K. Advani, in the International Court of Justice. He lobbied the UK government and later the US establishment to deny a visa to Modi. Today, he is urging Muslim intellectuals and scholars to talk to the Gujarat chief minister.

"The problem is that they start getting adverse feedback from their own peer group as soon as Modi's name comes up," says Sareshwala, Sareshwala may have switched to Modi's team today, but the Gujarat chief minister is still a deeply polarising figure. His detractors blame him for not reaching out to Muslims, especially the non-business community.

"Modi should have made efforts to reach out to the Muslim community. He has left no window open," says Hanif Lakdawala, founder of human rights organisation Sanchetana and a staunch critic of Modi. Ali Hussain Momin, a young entrepreneur, has mixed feelings about Modi. The head of an Internet start-up in Ahmedabad, he says it has become easier to do business in Gujarat, even if an entrepreneur is Muslim. "But as an individual, I still believe Modi has done little to engage with our community," adds Momin, who hosted the first property show for Muslims in Ahmedabad last year. 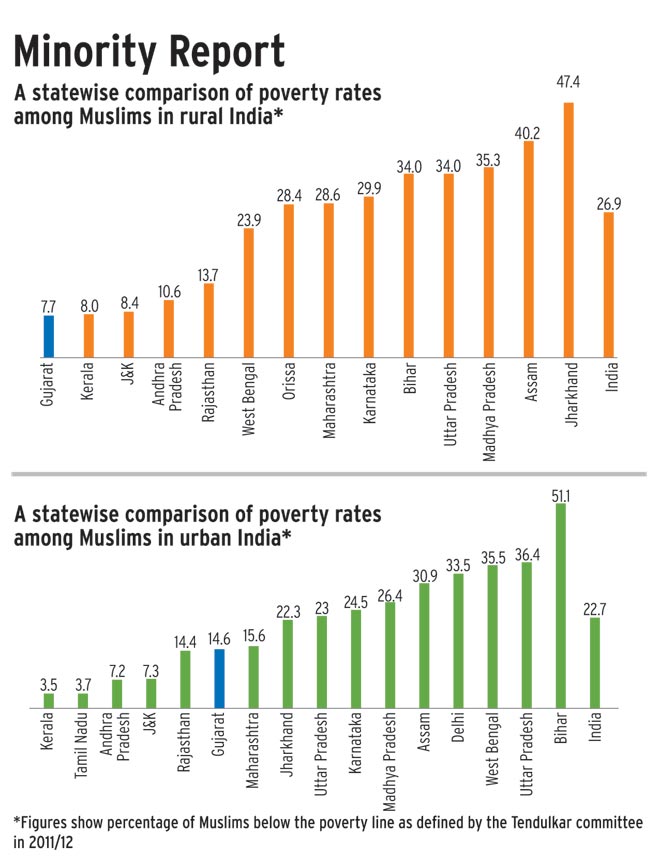 On his part, Modi is now trying to reach out to Muslims ahead of the general election due in May next year. His efforts come after he created a political storm by using a puppy analogy while referring to the deaths in the 2002 riots and after he ran headlong into controversy by accusing the Congress of wearing a "veil of secularism" every time it was in trouble. He has told his partymen not to consider Muslims "unapproachable", prompting his party's minority affairs wing to organise a series of outreach programmes. "For the first time in independent India, the opposition is trying to set an agenda of governance, for the first time you are getting an economic philosophy as the centre of the agenda in national debate," says Hindustan Construction chief Ajit Gulabchand.

Despite Modi's efforts, Muslims still remain a marginalised community in Gujarat. "There are no Muslim MLAs in the ruling party, there is hardly any Muslim name in police top league, there is no Muslim in the bureaucracy. You can count the Muslim businessmen. At the national level, he would have to open some space for minorities," says Lakdawala of Sanchetana. He adds that Muslims are getting more jobs in the private sector, but their share of government jobs is still small. But Sareshwala disagrees "There are 69 Muslim MLAs in UP. Has it made any difference to the lives of Muslims there? I strongly advocate that Muslims must excel in health, education, businesses and all professions. The political power will automatically follow," he said.

Analysts say Modi may have converted Gujarat into an economic powerhouse, but will not succeed in replicating the state's experience across India if he becomes prime minister. They say many elements of his economic model were already in place even before he became chief minister and much of Gujarat's success is a result of the entrepreneurial spirit of the Gujaratis.  "Modi has run Gujarat state well, but in a limited way. This is because he inherited a properly functioning administrative machinery and a prosperous economy when he came to power in 2001," says well-known sociologist Dipankar Gupta. "He got the golden wheel spinning. It is to his credit that he did not stop it, but kept it spinning."

Why India is grappling with shortage of natural resources