Auto classified portals have proliferated, but competition among them is fierce and profits elusive. 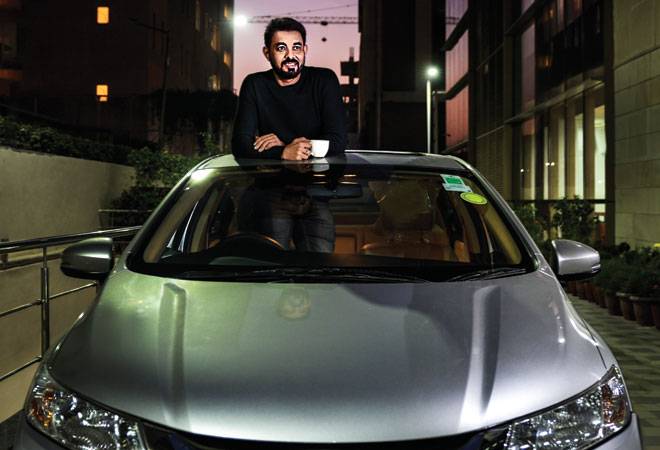 Of the 10,000 pre-launch bookings of Maruti Suzuki India Ltd's (MSIL's) new hatchback Ignis, which hit the market on January 13, 6,000 were made online. This was a marked increase from digital pre-orders of earlier MSIL launches, a result of the company beefing up its online platform considerably in the past year. MSIL is not alone - all auto companies are doing the same. Renault has launched a dedicated app for its hatchback, Kwid. Hyundai has set up its first "digital dealer" in Delhi to provide customers an "interactive buying experience" when they come visiting. Many auto dealers have 3D computer models of their brands on sale at select outlets which customers can familiarise themselves with before handling the actual product.

Alongside, a host of "auto classified" forums have also sprung up online, providing extensive comparative information on the specifications, prices and performance of different brands in the market. Most of them have links with auto companies, which follow up on the initial queries from visitors at these portals. Indeed, it is thanks to the popularity of these classified sites that both auto companies and original equipment manufacturers (OEMs) felt the need to augment their digital presence. There are even outfits which advise auto companies on how to best run their digital campaigns. Overall, auto portals get an average of 30 million visitors every month. The online thrust of the auto sector is acknowledgement of the rise of a new generation of tech-savvy millennial buyers of cars and two-wheelers. "The online auto market should double in the next few years, going by the increasing number of young customers hitting the online space for their choices," says Amit Jain, Co-founder and CEO, Girnar Software Pvt Ltd, the holding company of CarDekho, one of the leading auto-classified portals. "Online has opened up a plethora of revenue-generating options in the auto sector."

In the US, 30 per cent of car sales take place through the online route. Sites such as Carvana - which carries the tagline "Delivery to your Door" - enable the entire purchase process online. This is not yet possible in India, where after initial queries have been answered and bookings recorded online, customers still have to visit dealer outlets to work out the final price and take delivery. But given the rate at which online auto marketing is growing, a US-like scenario may not be too far away. "Ten years back, the walk-in customer was much more frequent than the one who telephoned to make enquiries," says Abhimanyu Sikarwar, HR Head, Ottoedge Services, which helps auto companies with digital marketing. "Today, it is the other way round. But in certain segments, customers seeking information digitally already outnumber both showroom visitors and those calling in."

Given the size of India's auto market - the biggest in the world in two-wheelers, fifth-largest in cars - the opportunity digital technology offers is huge. "See how the cab aggregators have used technology to disrupt the business," says Rajesh Singh, Director, DriveO Technologies Pvt Ltd, a portal for buying and selling of used cars. "Similarly, technology will soon disrupt transactions in the auto spare parts and accessories business, too, and even in the high-profit car servicing segment."

DriveO is one of a host of portals that have sprung in the used car business, which, in fact, is much bigger than that of new cars, selling around four million vehicles a year. About a quarter of used car sales today start with an Internet search, according to industry insiders. Not surprisingly, auto companies and classified portals have also entered this area, including the biggest - Mahindra First Choice Wheels, which sells around 85,000 used cars a year, and Maruti's True Value, with sales of around 400,000 - many of them offering attractive financing options.

Online used car dealers are a godsend for customers since the market is extremely fragmented, with buyers hard put to find trustworthy sellers. "Customers are often wary of used products and their history," says Vinay Sanghi, Promoter and CEO, MXC Solutions Pvt Ltd, which runs the auto classifieds portal, CarTrade. "It is crucial to establish trust. And once we can channel the entire package of used car sales from deal to financing over the Net, our business will soar."

The Indian foray into online auto classifieds started around 2008, around the time the Nano small car from Tata Motors was about to be launched. The hype around the "`1-lakh car" drew many start-ups into this space, but few survived Nano's initial failure to gain the expected traction. MCX Solutions and Girnar Soft are the two portals which did, thanks mainly to some fortuitous funding they drew in subsequent years. MCX Solutions, for instance, started in 2009 by Vinay Sanghi, CEO of Mahindra First Choice for eight years, has got funding from Warburg Pincus, JP Morgan, Temasek, March Capital and Epiphany Ventures. Sanghi is also representative of a trend of auto company executives branching out on their own in the digital space. Ottoedge's Sikarwar was formerly with Honda and Nissan, while DriveO's Rajesh Singh is a Maruti and General Motors veteran.

In contrast are the Jaipur-based brothers, Amit Jain and Anurag Jain, who set up Girnar Software in 2007, soon after graduating from IIT. CarDekho.com may be their best known site, but they have a range of others as well, with self-explanatory names - BikeDekho.com, TyreDekho.com, TruckDekho.com and PriceDekho.com among them. Girnar Soft, currently valued at over `1,800 crore, got an initial funding of $15 million from Sequoia Capital in 2013, followed by Series B funding of $50 million (`300 crore) from Hong Kong-based Tybourne Capital and Chinese investment management firm Hillhouse Capital in 2015. Since then, Tata Sons' Chairman Emeritus Ratan Tata, in his personal capacity, HDFC Bank and Google Capital have invested undisclosed sums in the company.

While these are the successes, the flameouts have been quite a few as well, with this nascent sector already having seen a wave of consolidation. Both Gaadi.com by the Ibibo Group and ZigWheels by the Times of India Group were set up with much fanfare, but both have been since acquired by CarDekho, the first in September 2014 and the second in October 2015. In turn, rival CarTrade acquired Carwale from German media giant Alex Springer in November 2015. Yet, the proliferation of new players continues with the starting of sites like Cars24, Carnation Auto and TeamBHP. General classified sites for all kinds of products, such as OLX and Quikr, have also entered the fray. Even e-commerce giant Snapdeal has offered its marketplace for automobile sales, though with limited success. The latest entrant is Droom, a mobile-first marketplace for used cars, which has raised seed funding - of an undisclosed amount - from Japan's Beenos Group, and a subsequent $15.6 million cash infusion from domestic venture capital firm Lightbox. 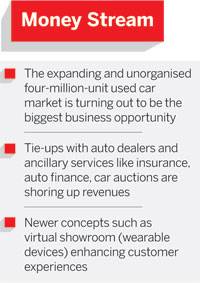 Nor has it been a smooth drive for Girnar Software and MCX Solutions - though their revenues are increasing, so are their losses. (See Uphill Ride.) Girnar incurred a loss of `107.58 crore in 2015/16, while MCX's loss stood at `137 crore. But the founders, whose enthusiasm remains undimmed, maintain this was due to the massive expansion they have been undertaking. "We aim to achieve a gross merchandise value of $2 billion in 2016/17," says Sanghi of MCX. "We have consolidated the business, have over 2,000 employees and intend to add another 1,000 this year."

The Jain brothers are equally gung-ho. "We want to emerge as a multi-billion dollar company by 2020, with a global footprint, by creating innovative technology products," says Amit Jain. He has already ventured overseas, setting up CarBay.co.id in Indonesia, and has plans to expand to Malaysia, Thailand, the United Arab Emirates, Saudi Arabia and Brazil as well. ~