Home and the world

Any discussion with Harsh Vardhan Goenka cannot be confined to business. The RPG Enterprises Chairman may well own the largest private art collection in India, and art is a constant distraction in his office in Worli, Mumbai, be it on the walls or in conversation. Again, no interview with him is complete unless it turns to matters gastronomical. Often, pinning down the businessman in Goenka is a challenge.

However, Goenka stresses that he means business, especially the global kind. It has been more than a year since he and his younger brother Sanjiv announced an amicable split in RPG Enterprises.

Sanjiv now has his own identity with the RP-SG Group of companies based in Kolkata. He has the more consumer-facing companies, including power company CESC Ltd, retailer Spencer's and music label Saregama. Goenka has infrastructure firm KEC International, tyremaker Ceat and software services company Zensar, which can easily be oriented toward a global consumer base.

The process of crafting a fresh identity for RPG Enterprises has seen the Rs 15,000 crore conglomerate take two distinct steps. One, to push for more global revenues and two, to professionalise management.

By 2015, Goenka wants more than half of his group revenues to come from overseas. "There is a certain frustration with the hassle of doing business in India - the redtapism and the corruption," he says. Frank Hancock, head of corporate finance at Barclays Bank, believes this reflects a trend of capital flight from India. "Increasingly, we are seeing Indian promoters investing abroad in order to counteract what they perceive as too high a level of domestic political risk," he says.

"I want to divorce my companies of the need to have me lobbying in Delhi," says Goenka. With Sanjiv going his own way, Goenka admits that the group has lost its public face. And Goenka is not ready to step into those shoes now. "Years back I could have been the youngest president of (industry lobby) FICCI. I declined," he says. Perhaps he is happy Sanjiv has the India-facing businesses.

Prior to the split, the two brothers worked closely. Says Sanjiv: "We vibed very well and complemented each other." In early 2008, Goenka expected the undivided group to record revenues of Rs 35,000 crore by 2012. It would have missed the mark by at least 20 per cent if it were still undivided today.

Goenka's disdain for lobbying sounds idealistic but impractical to S.P. Tulsian, an independent investor and market expert. "Harsh (Goenka) doesn't seem to be too ambitious. You have to lobby strongly in Delhi to be successful," says Tulsian.

Throw that at Goenka and he says he would rather be like Dilip Shanghvi of Sun Pharmaceuticals or Adi Godrej of the Godrej group. He believes they have scripted successes while maintaining a low profile. Goenka's largest growth engine is KEC Ltd. The power and telecom tower company is seeking to ride the wave of re-investments in power distribution infrastructure in the United States. Its revenues have grown at a compound annual growth rate (CAGR) of 21 per cent over the last five years, crossing the billion dollar mark. Its order book has grown at a CAGR of 26 per cent and is at Rs 9,000 crore now. KEC's footprint in the towers and engineering, procurement and construction (EPC) business has become visibly global after it acquired SAE Towers, which has a presence in the US and Brazil. Prabhudas Lilladher expects its earnings to grow 28.5 per cent till 2013/14. 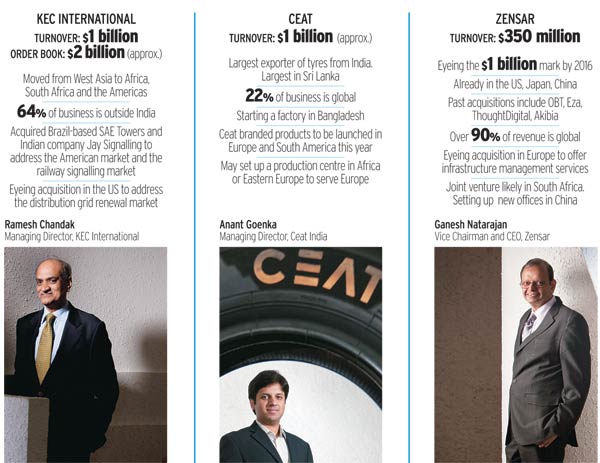 Ceat, the other growth engine, has been a troubled child in the face of huge opportunity. The company ended the first quarter of 2011/12 with a loss of Rs 41 crore. The next two quarters returned meagre profits. But there is a clear opportunity ahead. In 2010, the company had acquired the global rights to the Ceat brand from Italian tyremaker Pirelli.

This year, it will get the full rights to launch all kinds of tyres across the world, including Europe and Latin America, under the Ceat brand. That is something the company's new Managing Director can look forward to. On April 1, Goenka handed over Ceat's reins to his son Anant, 30, who was the deputy MD.

Goenka himself had led Ceat when he was 23. "Anant is better educated than me and has better exposure," he says. The Goenka scion has studied at the Kellogg and Wharton B-schools. Earlier, he had done stints in KEC and Ceat as well as HUL, Accenture and Morgan Stanley (in Hong Kong).

Ceat is the largest branded exporter of tyres from India and is also a big player in Sri Lanka. The company is all set to commence radial production at its new plant in Halol, Gujarat. It is also setting up a new plant in Bangladesh. It will soon launch in Europe, but since technology is an issue, RPG will target the broader market rather than the highend niche that Pirelli served.

Prabhudas Lilladher sees Ceat posting a profit of Rs 66 crore next year versus a loss this year. The brokerage house's view on the company is based on the softening of rubber prices in international markets. However, that softening may prove to be a double edged-sword for RPG Enterprises. Harrisons Malayalam, the group's tea and rubber company, has been split between the siblings. Goenka wants to take his part of Harrisons to Africa, buying a rubber plantation there.

Meanwhile, with $350 million in revenue, Goenka's information technology company, Zensar, is targeting the billion dollar mark by 2015. It is led by Managing Director Ganesh Natarajan, a former Nasscom chairman. The company intends to make a European acquisition in the current financial year apart from setting up new offices in China and West Asia.

After the split, Goenka has also tried to bring in more professionals and increase board-level involvement in the running of his companies. Over the last three years, he has brought in independent directors such as G.L. Mirchandani, VIP Industries' Dilip Piramal and former Unilever Philippines Chairman Venkatesh Kasturirangan on the boards of his group companies. This has lengthened board meetings, sometimes making them day-long affairs.

Goenka is now hunting for a group CFO and has also started centres of excellence within the group for functions such as human resources and finance. "At a very young age Mr Aditya Birla taught me how to capture group synergies. They call it the Knowledge Integration Programme," says Goenka, pointing in the general direction of the Aditya Birla Centre, headquarters of the AV Birla Group, next door.

Goenka took over the mantle of chairman from his father Rama Prasad Goenka in 1988, when he was 30. Today, at 54, he has to prove himself afresh.

Behind Uninor's rising subscriber base

'Our growth is way above the industry average'