The housing finance market is slowing down, but not if you asked HDFC, which is clocking growth rates of 25-30 per cent and even expanding its market share. The inside story of how it has kept running while others around it are stumbling.

Deepak Parekh
As we are ushered into the office of HDFC Vice Chairman and Managing Director Keki Mistry at the appointed hour, we are informed that he is running a temperature. But that has clearly not affected his adrenalin levels.

As we start discussing HDFC’s performance, he immediately warms up to the conversation. Full of beans, he brushes aside talk of any slowdown in the mortgage market. “We have not been impacted and our growth rates have not been affected at all,” he says, pointing to the third quarter results to buttress his claim.

Keki Mistry
During this period, HDFC excelled on most parameters, delivering strong top line and bottom line growth. Its loan portfolio expanded 27 per cent over the previous corresponding quarter, it gained market share and spreads expanded 12 bps to 2.3 per cent. Significantly, its disbursements grew 30 per cent and net interest income was up 62 per cent.

Cut to ICICI Bank’s head office in Mumbai’s Bandra Kurla complex, where the mood is distinctly less upbeat. Admits Sunil Rohokale, Head, Home Loans, ICICI Bank: “Our disbursements growth will be flat this year in line with the broader market.” Rohokale says that the overall growth of the market is likely to moderate this year to between 10 per cent and 15 per cent and most of banks and housing finance companies will grow at the same rate. ICICI Bank’s estimates are in line with the prevailing ground realities. Independent studies of the Indian mortgage market point to a significant cooling off of the high growth rates seen between 2001-02 and 2005-06 that were driven by the strong underlying economic growth, a low interest rate regime and significant tax concessions for self-occupied residential home borrowers. In 2005-06, housing finance disbursements were estimated at Rs 93,100 crore against Rs 23,900 crore in 2001-02, a CAGR of over 40 per cent.

The situation has, however, changed significantly after that. CRISIL Research estimates that in 2006-07, there was a marked slowdown in disbursements. The industry grew 11.4 per cent during the year, and it estimates that this may taper off further to just over 10 per cent in 2007-08. The culprits: the uptrend in property prices and the rise in interest rates, which have combined to reduce the affordability factor for home buyers.

HDFC stands out amidst this overall downcast scenario. It has beaten the market and its nearest competitors, posting growth rates of over 25 per cent in disbursements.

Says Manish Karwa, Analyst, Motilal Oswal: “It puts HDFC in a sweet spot. It is gaining market share as it has been able to sustain high growth rates.” So, what is its secret recipe for success? There’s a well thought out strategy to score over the competition.

Says a senior HDFC executive: “The goals are clearly laid down by the management. There is a four-pronged thrust—grow approvals and disbursements between 20 per cent and 25 per cent, increase RoE by a percentage point every year, ensure consistent reduction in the cost-income ratio, and keep gross NPA levels at less than 1 per cent. So far, we’ve been able to meet these targets consistently.” 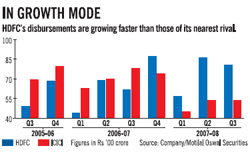 At the heart of HDFC’s thrust is the focus on India’s burgeoning middle class as its core clientele. Says Mistry: “We are catering to end-users; 95 per cent of our retail loans are to this class of buyers. We don’t encourage lending to investors and speculators.” This strategy has yielded it rich dividends as its typical borrower is a firsttime home buyer looking for self-occupation (the new average ticket size is Rs 12 lakh).

“The middle and lower income groups are going ahead with house purchases, since tax benefits still make it worthwhile for them. But there has been a definite slowdown (in house purchases) among people going in for high value loans. Most banks made the mistake of focussing on the high-end segment; so, they are now feeling the pinch.” Then, HDFC has also consciously targeted younger buyers.

This class of buyers is driving demand as a consequence of higher disposable incomes. The new average age of HDFC’s borrowers is 34 years (marginally lower than the industry average of 36). And Mistry and his team are convinced that the favourable Indian demographics— the median Indian age is 25 and there is a rapid rise in new households—will lead to sustained demand for housing over the next few years.

HDFC’s housing loan portfolio is dominated by individual loans, which make up 67 per cent of its disbursals. It is this segment that has powered its overall disbursement growth over the last few years. But now, its non-retail lending (loans to companies, builders and developers) has also begun to pick up. In the third quarter of 2007-08, non-individual loans grew 39 per cent, while retail individual lending moderated to 22 per cent.

Says ICICI Bank’s Rohokale: “Unlike us, they have diluted their focus on the retail segment and that is helping them sustain their growth momentum.” HDFC vehemently denies this. Says Mistry: “Our retail loans are also growing at a healthy clip; and our ratio of individual loans to non-individual loans has remained largely constant over the last few years.”

What is also helping HDFC score over banks is the hike in the banking sector’s cash reserve ratio (CRR) by the Reserve Bank of India. With the central bank raising CRR on a continuous basis, the cost of funds for banks continues to remain high. As a result, they are unable to reduce lending rates. As HDFC is not required to maintain CRR, it continues to enjoy higher spreads, despite offering lower rates than banks. Lower spreads have also meant that mortgages are losing their attractiveness for many banks. Says Vishal Goel, Analyst, Edelweiss Securities: “Banks are now shying away from the market, and, instead, looking at businesses with better margins. With corporate credit picking up, the mortgage market has become unattractive for them.”

Renu Karnad
HDFC is also scaling up its presence in smaller towns and cities. It is now building a strong distribution network across the country. HDFC already has a network of 244 outlets, which include over 40 offices of its distribution company, Home Loan Services India (HLSIL), which was set up three years ago. The housing finance pioneer has, over the last couple of years, also been utilising third-party channels to distribute its products more widely. These channels include HDFC Bank and its network of direct sales agents (DSAs).

The increased distribution network and use of DSAs have helped HDFC penetrate new geographies in urban and semi-urban areas, while containing its cost-income ratio. To further increase its presence in Tier-II and Tier-III cities, it has initiated outreach programmes where its staff visits cities in which it doesn’t have outlets to meet customers. Depending on the response, HDFC converts the outreach programme into a brick-and-mortar office. Says Renu Karnad, Joint Managing Director, HDFC: “We see huge business potential in the smaller cities and are growing very fast in cities like Pune, Chandigarh and Nashik.”

Most importantly, HDFC has been able to maintain its asset quality, despite rising interest rates and subsequent hikes in EMI. The HDFC management attributes this to two major factors: one, it has very strict credit appraisal and control procedures in place, which it does not dilute under any circumstances.

“We are extremely focussed on asset quality,” says Karnad. Secondly, its typical borrower— who is an end-user availing of small- or mediumticket loan—is cautious and averse to high leverage and opts for a low loan-to-value ratio; this, too, goes a long way in ensuring low NPAs. The efficacy of these procedures is borne out by the fact that its loan losses over the last 30 years aggregate to a mere 0.04 per cent of its total disbursements. Further, its NPA provisions have always been higher than the RBI stipulation. HDFC’s gross NPAs, at around 1 per cent, are superior to those of most banks and housing finance companies. “Asset quality has never been an issue with HDFC because of its conservative lending practices. With nearly all its lending secured, the risk of NPAs is low,” says Motilal Oswal’s Karwa.

While HDFC’s performance has been impressive, analysts say the biggest challenge before the company now is to sustain high growth rates going forward. Says Goel: “Unless property prices fall significantly, HDFC might find it tough to maintain high growth rates, particularly in retail loans.” The HDFC management, though, appears confident that growth rates won’t be affected. Says Karnad: “We have grown at these rates for the past several years and believe we can stay the course in the future as well.”

Are those merely brave words or a considered opinion? Market conditions are admittedly tough, but HDFC’s track record is too compelling to ignore. Watch this space.

The clash of the telecom titans