Healer of the well-heeled

Shivinder Mohan Singh is an unabashed torchbearer for corporate and super specialty hospitals. Can he help make healthcare the next big thing and Fortis the leader in the industry? 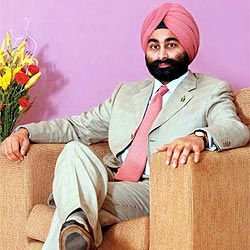 There’s nothing stereotypical about Shivinder Singh. He doesn’t play golf, doesn’t spew corporate jargon and— how’s this for contrast—he plays hockey whenever he gets a chance to be with old friends. Hockey of course is India’s national game, but the country’s domination—and along with it the game’s popularity—has ebbed over the past couple of decades. But Singh is still as passionate about dribbles, flicks and free hits as he is about building a healthcare empire.

Like a true-blue forward on the front line, Singh is focussed on the goal—his goal. The 33-year-old Managing Director of Fortis Healthcare is targeting a top line of a billion dollars by 2012 by creating a chain of 40 hospitals with 6,000 beds. At the end of last fiscal, Fortis had revenues of Rs 630 crore (roughly $130 million), 28 hospitals and 3,300 beds.

He hopes to get there with an aggressive mix of organic growth, acquisitions and management contracts. Fortis is well-placed financially to pull off this growth gambit. After raising Rs 650 crore with an initial public offering in October 2006, Singh now has a Rs 1,000-crore rights issue on the anvil.

Last fortnight, Singh sealed a strategic partnership with S.L. Raheja Hospital in Mumbai to manage the facility. He is also said to be the frontrunner, with a Rs 900-crore bid, to acquire Wockhardt Hospitals, although he refuses to comment on that potential deal. In January, Fortis acquired a majority stake in the Bangalore-based Apollo R.M. Hospital And last May, Singh made an international buyout when he acquired Mauritius’ largest private hospital.

Singh’s vision is to bring the Mayo Clinic or a John Hopkins experience to India. “For us a Mayo or a Hopkins Clinic stands for scale and super-specialty care,” says Singh, who is building an ambitious 1,000 bed hospital in Gurgaon, which will be India’s largest multi super specialty hospital.

For a man who was till last June also a Director of Ranbaxy Laboratories—till the Singhs, including Shivinder’s elder brother Malvinder, sold out to Daiichi Sankyo of Japan—Singh has been remarkably busy. Today, Singh is fast emerging from the shadow of his brother. “I was lucky to have a support system within my family,” shrugs the Doon School alumnus.

Cut to the mid-’90s. Singh is studying Mathematics at Delhi’s St Stephen’s College. Even as friends rib him for having a ready job at Ranbaxy—a company founded by his grandfather Bhai Mohan Singh— Singh is wrestling with a dilemma. He isn’t keen to get into the pharma sector. “I wanted to do something that would have a social impact and also a customer interface,” recollects Singh. One vague idea was entertainment. “I think if you can make people laugh you are doing a great service,” he grins.

It was his father Parvinder and uncle Surendra Daulet Singh who planted the healthcare idea in Singh’s young mind (although his father also advised him to do an internship in pharma; Singh obliged by interning at Eli Lilly India). The only problem: Singh had no clue about the business. Once he stepped out of college in 1995, Singh got involved with a healthcare project as its sixth employee. “It was all Greek, French and German to me,” says Singh about his initial days spent in a 500 square feet office on Delhi’s Hanuman Road.

But over the next two years Singh learnt plenty about healthcare courtesy of a cruel twist of fate. His father took seriously ill and Singh did the rounds of “17-20 of the best hospitals in the world, especially in the US.” By the time the blueprint for the first hospital in Mohali was ready and the foundation stone laid in 1999, Singh’s father had passed away.

Singh took charge at Fortis, Mohali immediately after. A degree from the Duke University of the US came handy as he got exposed to the entire gamut of healthcare—medical devices, technology, insurance, biotech. The Mohali Hospital came up in a record 18 months. “All my learnings came from the Mohali venture,” says Singh. Mohali today is the biggest revenue generator for the company.

The other big contributor to Fortis’ growth is Escorts, which was acquired in 2005 from the Nandas for Rs 585 crore. The high-profile spat with cardiologist Naresh Trehan, who held 10 per cent in Escorts, didn’t do Fortis any favours, but it was good ground for Singh to display his turnaround skills by decentralising operations and reforming systems and processes.

If there’s one criticism that’s heard against Fortis—and indeed against many others of the corporate healthcare tribe— it is that they’re targeting the affluent class; there’s little concern for the bottom of the pyramid where affordable healthcare is an imperative. The industry’s contention is that the government has to pitch in here with the concept of universal insurance, whereby individuals are assured of basic cover.

For the moment, however, acquisitions in a highly-fragmented market is the way to go for Fortis. There are roughly 45,000 hospitals in the private sector. Only 6 per cent of them have over 100 beds. The rest barely have below 30 beds. The upshot: Plenty of room for amalgamation and consolidation.

“There is an opportunity for many more corporate players,” says Arvind Singhal, Chairman, Technopak, a consultancy that specialises in healthcare. Singh estimates that of the capacity of 15 lakh beds in India—most run by government, societies and charitable trusts—only some 6 lakh would be operational. “The issue is of optimising the capacity,” reckons the Fortis front man. That’s the goal he’s furiously dribbling towards.