Home (Not So) Alone

True to its name, Health Care at Home brings hospital care, ranging from injection to chemotherapy, to your doorstep.
By Sonal Khetarpal | Print Edition: August 28, 2016 It was 11 PM when a Noida-based IT consultant was bringing her father home from the hospital - he was being discharged after two months. "We needed a full-time assistant and an air bed urgently," she recalls. Doctors prescribe air beds for bed-ridden patients to prevent bed sores. She contacted Health Care at Home, a patient care service provider, and in an hour a team was setting up the bed at her place. This was in May 2015; she has continued using the service since then.

Vivek Srivastava, CEO of Health Care at Home (HCAH), admits that it was an anomaly and that it usually takes 24 hours of fulfilment time as commercial vehicles - required to carry items such as beds - are allowed to ply only in the early hours.

Patient services at home are being increasingly availed by families, especially for those with long-term chronic illness. The weak public hospital infrastructure, and over-crowded and expensive private hospitals - as per World Health Statistics, India has only 0.9 beds per 1,000 people, far below the global average of 2.9 - are paving the way for more such services. Moreover, a PwC report states that India needs an investment of around $245 billion to address this problem of limited resources; only then can it cater to the need for 3.5 million beds, three million doctors and six million nurses over a period of 20 years.

In 2012, Srivastava, who used to manage private investments for the promoters of Dabur, met Charles Walsh and Dr. Gareth Jones, co-founders of Health Care at Home in the UK. The duo had exited the Rs 13,000-crore company - built over 18 years - and was scouting for a partner in India for a similar venture. The Dabur scions, Anand Burman and Gaurav Burman, also got interested and co-founded the venture. The partners plan to invest Rs 200 crore in the entity over the next five years.

In the beginning, HCAH tied up with hospitals to provide post-operative treatments such as injections, dressings and physiotherapy sessions at patients' homes. Delhi-based Fortis Healthcare was its first partner. When the company realised there was a huge demand for post-surgery and palliative care for patients 24x7, it launched the ICU at Home service, which now generates the maximum revenue, Srivastava informs. Over the years, it expanded its services to provide complex treatments such as home ventilation and chemotherapy. Srivastava claims that HCAH can provide 70 per cent of the services provided in hospitals at the comfort of a patient's home. Surgeries, radiation-related medical tests such as MRI and ultrasound, which require a licence, are outside its purview.

In 2014, the company started partnering with pharmaceutical companies to offer value-added services such as counselling for specific illnesses and reminders for medicine delivery. HCAH has tied up with 40 pharma companies; the contracts can cost Rs 50,000 to Rs 20 lakh per month, depending on the scale of services required. Today, 60 per cent of its revenue comes from this segment. The rest comes from hospitals and individual patients.

The cost of a wound dressing or injection could be Rs 500, whereas setting up an ICU at home could cost between Rs 6,000 and Rs 20,000 per day, which, Srivastava says, is 30-50 per cent lower than what a hospital charges, on average.

HCAH provides mandatory six-week in-house training to its personnel, followed by regular refresher courses and an examination. There is heavy reliance on technology to ensure processes are streamlined and quality is assured. Its in-house tech platform generates care plans automatically, as per the disease, and measures the patient's condition on 300 parameters. The software is loaded onto the tablets that the healthcare providers carry. This allows HCAH to monitor services provided in real time. Apart from remote monitoring, random physical checks are carried out every month and calls to the patient's family are made once in two to three days.

The two users this writer spoke to affirmed HCAH's emphasis on strong customer service. A Delhi-based female entrepreneur said, "I have screamed at them and vented my frustration, but the good thing about them is that they listen, apologise and try to rectify the situation." 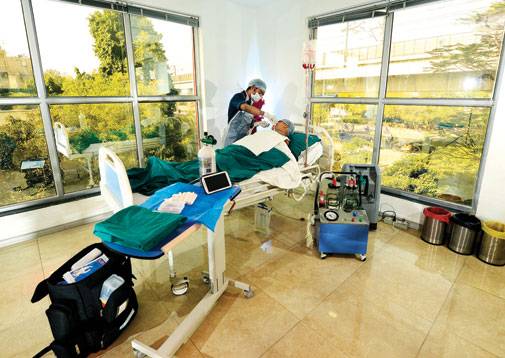 A patient being treated at home (Photo: Shekhar Ghosh)
The IT consultant quoted in the beginning, who does not wish to be named, said, "They would call me three times a week to check if the service provided was fine. When they got to know that I have a travelling job and my mother is alone at home, they started calling her every alternate day, without us asking." However, she would prefer that physical checks be done more often, especially for critical patients.

HCAH is exploring partnerships with insurance companies for pre-policy check-ups, post-operative care and ICU at Home services for people covered under an insurance plan to bring down the claim cost. Recently, it acquired Mumbai-based Health Impetus for an undisclosed amount to offer disease management services. It has also partnered with Japan's $10-billion healthcare media company M3 to launch an internet-based healthcare service in India.

According to PwC, globally, the home healthcare market is estimated to be worth $210 billion, of which India has 1 per cent share - about Rs 13,200 crore. Estimates indicate that close to 90 per cent of the home healthcare market is unorganised, serviced by local players. Several other companies such as Bangalore-based Portea Medical and Nightingales Home Health Services, and Chennai-based India Home Health Care have woken up to this huge opportunity.

HCAH claims to have grown by a hundred times since its inception and has serviced 300,000 patients. This growth has helped the company become gross-margin positive, says Srivastava. "We are yet to recover the investments for fixed costs, which we hope to do by 2018." As per MoC, in FY 2014/15, the company's revenue was Rs 13.77 crore, a healthy growth from the Rs 1.87 crore in 2013/14.