Leadership in scooters is not enough. Honda has a long way to go in motorcycles.

Kaustubh Sinha, a young advocate in Delhi, went to a Race Honda showroom of Honda Motorcycle & Scooter India, or HMSI, to buy an Activa scooter. But once there, it was a motorcycle from the same stable, the CB Twister, that held his gaze. "I liked the colour, and it is almost the same price as the Activa. It looked super cool too. I think I will switch from scooter to motorcycle," Sinha says.

Customers like Sinha are good news for HMSI. But the company will have to find tens of thousands like him if it wants to be a leader in the two-wheeler market, having ended a 26-year-old association with the Hero Group that had given its flagship Hero Honda a formidable 44 per cent market share. HMSI, a fully owned subsidiary of Honda, has 12 per cent. HMSI is the leader in scooters with a market share of close to 44 per cent. Hero Honda (it will retain the Honda tag for some time), TVS and Mahindra & Mahindra, or M&M, have shares of 16 per cent, 22 per cent and 8 per cent, respectively, according to the Society of Indian Automobile Manufacturers, or SIAM. But in the motorcycle segment, HMSI still has a long way to go. Motorcycles make for over three-quarters of an increasingly competitive two-wheeler market. Bajaj Auto will soon re-launch its 100 cc model Boxer while new players M&M and Suzuki are revving up.

Scooters ruled the segment till the turn of the century. Then, LML's scooter business crashed and even the maker of the ubiquitous Chetak, Bajaj, switched to motorcycles. Kinetic Honda, a joint venture between Kinetic and Honda, had braved the odds when geared scooters were doing well in the country with its automatic transmission model aimed at women.

When the Kinetic-Honda venture broke up in 1999, HMSI launched the Activa. "Though HMSI has a geared scooter (Eterno), most of the growth comes from Activa," says Deepak Jain, Assistant Vice President at Sharekhan, a brokerage firm. HMSI also focused on women, who are becoming the biggest buyers in the scooter market. Today, it has 43 per cent of the scooter market. In the next financial year, HMSI aims to sell 16.5 lakh two-wheelers, of which 8.6 lakh will be scooters. 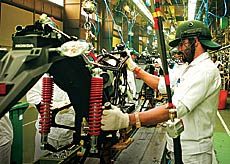 Workers at HMSI's Manesar plant which has seen three labour upheavals
Says HMSI President and CEO Shinji Aoyama: "The idea is to serve people better with better products." HMSI accounts for nearly six per cent of the parent's global two-wheeler revenues. In April to December 2010, it was one of the fastest-growing twowheeler makers, even if on a small base, with sales up 40 per cent on the same period of the previous year, right after Bajaj (42 per cent).

HMSI admits it does not have the right products for the motorcycle market. "We do not have a core product for India. More than half of the two-wheeler market is 100 cc and we did not have much there," says Aoyama. The 110 cc Twister was launched in December 2009.

The biggest hurdle
Japanese motorcycle manufacturers have a history of making 500 cc bikes - a market that practically does not exist in India today. The only manufacturer in this range is Eicher Motors's Royal Enfield. Still, Honda succeeded in developing less-powerful motorcycles for India and other emerging markets. "Honda has been a market leader (as Hero Honda) and been in India for long. They just have to get the marketing and the selling strategy right," says Vaishali Jajoo, an auto analyst.

In late 2004, when Hero Group and Honda extended their pact for another 10 years, HMSI launched the 150 cc Unicorn motorcycle, staying out of the 100 cc segment as it did not want to eat into sales of Hero Honda's Splendor and Passion. Production volumes for the 150 cc bike are also more manageable. "If it had come out with a successful 100 cc bike, it could not have managed volumes," says an analyst who does not wish to be named. At present, buyers have to wait for up to eight months for some models even though the company's plant is working at full capacity.

Not every buyer is willing to wait that long. Carmaker General Motors India learnt this the hard way: when it launched the Chevrolet Spark, it did better than expected, but then started losing out because it could not ramp up production fast enough. HMSI'S plant at Manesar in Haryana rolls out 1.6 million units a year on three manufacturing lines. The new plant, at Bhiwadi in Rajasthan, will be operational by mid-2011, producing 1.2 million units a year. Volumes are important in the 75-125 cc bike segment, in which HMSI now has a share of 2.72 per cent. Hero Honda accounted for 70 per cent and Bajaj 18 per cent of the 47.8 lakh units sold in April-December 2010. Nearly three in four motorcycles sold are in the 75-125 cc segment. HMSI has been a strong contender in motorcycles above 125 cc, although its market share of 20 per cent is way behind Bajaj's 51 per cent.

But, while the Japanese major is addressing problems related to technology and capacities, labour trouble is another matter. HMSI has had three labour upheavals in the past five years. In December, workers shut down the plant for a day after a security executive allegedly slapped one of them.

"The northern belt does not have a history of unionisation," explains Rakhi Sehgal, an activist with New Trade Union Initiative, a non-government organisation. Harjeet Grover, a former general secretary of the first union to be set up at the plant, says: "The management tries to dominate the workers."

Aoyama disagrees: "We will go bankrupt if we listen to everything the workers say…" A second union, formed two years ago, was reportedly close to the management. But in the elections this January, it lost to the first union led by Suresh Gaur. Grover says the management had created a wall between the 2,000 payroll workers and the 3,000 to 4,000 contract staff - separate buses for commuting, lockers and even punching machines.

Aoyama defends this as a global best practice since the profiles of these two groups of workers are different. Then, in distribution, HMSI has 800-odd outlets against Hero Honda's 4,200. Another deterrent is a common one across industries: input costs are increasing and eating into margins. "We can't pass on the cost to the buyer. We have to reduce production cost," says Aoyama.

Analysts say in 10 years, HMSI will have a healthy 15 to 17 per cent share of the two-wheeler market and the loser could be its former partners, the Munjals of Hero. But, that may not be enough for the ambitious Honda. In most emerging markets like Indonesia, Brazil, Vietnam and Thailand, its market share is 45 to 50 per cent. In India, that is a long way off.
TweetYoutube