Honor 8, the new smartphone from Huawei, packs in a solid dual-lens camera, and multitasks with ease.
By Nidhi Singal | Print Edition: December 4, 2016 Crafted with a combination of metal and glass (15-layer glass design), the Huawei Honor 8, with its shiny and reflective back panel, looks sleek. It is available in black, white and blue colours. With a 5.2-inch full HD display, it is comfortable to hold in one hand. It has a dual camera module at the rear and a fingerprint scanner. Huawei has made the scanner into clickable button that can be used to perform actions - for instance, single-click and double-click shortcuts can be assigned to switch on the torch, take a screenshot, start voice recording or launch an app. Long pressing the scanner launches the Google browser by default, which can be changed. I assigned the single click to launch the camera and placing the finger over the sensor triggered the shutter to capture the image. 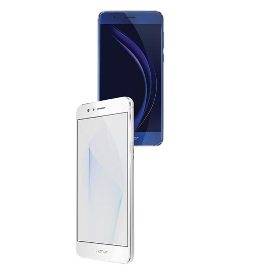 Dual camera modules have been added to smartphones in the past, but none have been as good as those on the Apple iPhone 7 Plus. Recently, though, the dual camera on Huawei P9, priced on the higher side, was lauded for its imaging capabilities. The Honor 8, in the mid-range category, too, impresses.

One of its dual lenses is aimed at capturing rich colours, while the other one is monochrome to give images more light and sharpness. When turned on, the mode can be used to capture shallow depth of field within two metres. It works well and the background blur can be adjusted using the slider that appears near the focus. Using this, I was able to adjust the aperture from f/16 to a simulated f/0.95, and the effect was visible in real time on the phone's display as well. There are plenty of other modes including HDR, Pro Photo and Pro Video. The images captured under natural light offered great detail and accurate colours, but the indoor shots had some amount of noise.

The Honor 8 performs well and multitasks with ease. It is powered by the company's own HiSilicon Kirin 950 processor, paired with 4 GB of RAM, with the Emotion User Interface 4.1 or EMUI on board. The apps are placed across multiple homescreens and the notification bar looks different from most of the custom UI. It comes with 32 GB of internal storage, of which only close to 23 GB was accessible. It packs in a non-removable 3,000-mAh battery, which supports quick charging, and lasted a day with above-average usage.