How green is Chouhan's valley?

Farm growth has fired Madhya Pradesh's GDP. Has that come at a price? 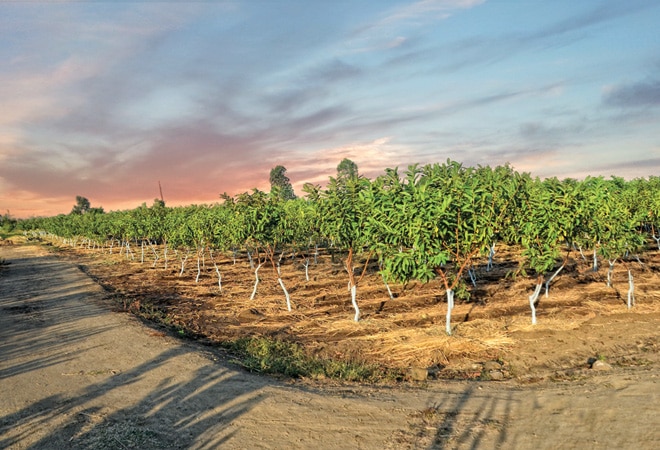 Sonu Devi of Sevania village, in Madhya Pradesh's Sehore district, is a stout woman of 31. She begins her day at five in the morning. After sending her two children to school, she prepares lunch for the family and joins her husband on their two-hectare farm. In the evenings, though, Sonu Devi is transformed, as she educates other women of the village on new methods of farming. She was the first to adopt farm mechanisation in her village.

Dressed in a light-green sari, the parting of her oiled and plaited hair lined with vermillion, Sonu Devi speaks softly and laughs easily as she is asked who takes the big decisions, she or her husband. "Hum dono (both of us)."

A class XIIth pass, she is eager to learn more and picks up the details quickly, says J.K. Kanojia, the manager of a Krishi Vikas Kendra (KVC) in Sevania. Kanojia shows off the lush KVC farm proudly. It was barren just 10 years ago.

Inevitably, signs of prosperity have come to Sevania. Most homes have electricity and television sets. In Seoni district, for instance, monthly per capita spend has grown by 20 per cent and television penetration has risen from 26 per cent to 41 per cent in the last seven years.

That is reflective of the change in all of Madhya Pradesh. The state's gross domestic product (GDP) has grown at more than nine per cent consistently since 2009/10, most of it on account of agriculture, which has averaged about 20 per cent growth in these years. As the size of the GDP has grown, agriculture's contribution to it has also grown to 27.5 per cent in 2013/14, up five percentage points in two years. Land under cultivation rose 21 per cent in the 10 years to 2012/13.

This has been possible because of a concerted programme driven by Chief Minister Shivraj Singh Chouhan, himself an agriculturalist, who took charge in 2005. "I thought until agriculture became profitable, the lives of the people would not improve. I have always said agriculture should be about profit - it should be a business," says the understated Chouhan, dressed in his characteristic kurta pyjama.

Left check
The state has encouraged farmers to grow different crops. There is state scheme that runs a Rs 14.5 crore fund for paddy, Rs 53.5 crore for wheat, and Rs 122.15 crore for pulses.

"We didn't have fertile soil or water for irrigation. Our goal is to make such scarce resources productive," says Kanojia of Sevania's KVC, as he shows flowering fields with newer varieties of seeds, composting for organic farming, and cross-farming, among other new techniques that the state wants its farmers to adopt. "Learning is by doing and believing is by seeing. Until you show the farmer, he will not believe."

She does, led by Sonu Devi and her ilk, who have seen much more than just new farming techniques.

Not too long ago, they waited for days, even weeks, to sell their grain. Heaps of wheat and other grain would be found piled up outside state procurement centres. Many a time a frustrated farmer would sell his produce to a trader for a song.

Until three years ago, the state had nine million tonnes of storage capacity; today it has 15 million tonnes. Madhya Pradesh's losses due to inadequate storage are less than one per cent of Food Corporation of India's.

At e-procurement centres a farmer is required to register with crop details including expected output and harvest time. This helps the state plan for storage. Though the government has its godowns, it also rents some, and has modern steel silos.

In less than a decade, there has been a sea-change. Gone are the days you saw the stereotypical image of an impoverished farmer looking up at the sky for rain, or haplessly around at flood waters. The farmer today speaks of e-procurement centres and shows tutorials of new farming techniques on his smartphone.

The new stereotype is a farmer talking about organic farming, sending his children to colleges, starting allied businesses, adopting technology, and travelling abroad to learn more about farm mechanisation.

Travelling abroad? Yes. Pehrat Tyag Ji, Sarpanch of Lasudia Parihar, a village 30 km outside the state capital Bhopal, talks about seeing magic. In Singapore. The visit was partially sponsored by the state. Showing pictures on his phone of a tomato farm there, Tyag Ji recalls his meeting with the man who tilled that farm. "He sold tomatoes worth Rs 70 lakh from a one-acre farm in nine months. I couldn't believe it."

Now, Tyag Ji grows 60 to 70 quintals of paddy in his 1.5-acre farm by drawing water from Balram Talab, one of eight ponds built in the village with the help of Rs 80,000 for each from the state government.

Others in Lasudia Parihar speak about the favourable impact of dug wells on productivity, as also on diversification - paddy is being grown for the first time in this village which has primarily been a wheat area.

Wednesdays are particularly important in Lasudia Parihar. That's when the villagers gather at 12 noon at the e-learning centre to chat with a scientist through a video link. They talk about new technologies and techniques, innovations, seeds, crop diseases, use of fertiliser, etc.

Rajuketwas, 33, is a regular at these sessions. He says they helped increase the productivity of his 1.5-acre farm five to six times. "Even selling the produce is much easier now."

Rajuketwas has sprinklers to irrigate his field, which were set up with money from the state. He talks about his 14-year-old daughter, who goes to a government school and wants to become a doctor, and 10-year-old son, who goes to a private school. "I want to give them the best of everything."

Chief Minister Chouhan's model is based on empowering the farmers to make the right choices for themselves with emphasis on enhancing capabilities and facilitation, rather than doles or subsidies. In power, for instance, farmers get uninterrupted and good quality of power for a certain number of hours - schedules are made and kept.

"A farmer requires power for eight hours, not 24. During peak hours we don't give power to agriculture at all," says Anthony Desa, the state's Chief Secretary.

When Chhattisgarh was hived off in 2000, Madhya Pradesh was left with only 4,000 megawatt of installed capacity. Today there is 14,000 MW. Irrigation is a similar story. Seven years ago 700,000 hectares were under irrigation, today there are 2.7 million.

For starters, the government took on all unfinished irrigation projects. Nearly three-fourths of resources were directed towards completing them.

"Everyone likes to lay a foundation stone, this (completing the projects) needed a real political will," says Desa. The administration laid emphasis on dug wells for irrigation, as opposed to tube wells to prevent the water table from depleting further. A well cannot be dug anywhere, but tube well can be installed almost anywhere. A tube well is also cheaper, but can cater to only a small area. A dug well or a pond can irrigate a larger area. A dug well can also store rain water. The state encourages use of dug wells since water has been a problem in the state.

According to an impact assessment study conducted by the Indian Institute of Management, Indore and CIPET Bhopal, areas under the state's Micro Irrigation Scheme showed a 30 per cent higher yield for potato, onion, garlic, and banana, and 20 per cent for other crops. Users used nearly 50 per cent less water.

Madhya Pradesh spent over Rs 46,000 crore in subsidies in 2013/14. It spends about Rs 15,000 crore on agriculture subsidies, which includes any assistance it gets from the central government. Chief Minister Chouhan still found a way to make farming a for-profit venture. 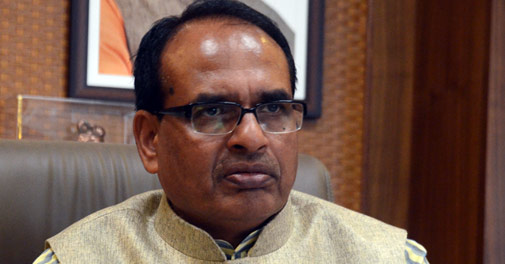 "We decided to increase irrigated land, give zero-interest loans, dug 300,000 wells, changed the crop pattern, and increased farming of flowers and other commercial crops. Now we are moving towards food processing," he says.

Satish Kumar Dhoot, 55, used state assistance to set up a farm mechanisation rental centre. Dressed in a Van Heusen shirt, Dhoot shows off his eight machines with much pride. He invested Rs 10 lakh in the project, the government another Rs 10 lakh. The centre made a profit of Rs  2.5 lakh in the first five months.

"The challenges associated with farming are driving farmers away," says Dhoot. He rents out cultivators for Rs 600 an hour, and often works on a two to three week credit cycle. He has two sons. The older one works for a multinational corporation in Indore and the younger helps out at the farm. "I want to bring in new machines and use the best quality of seeds. Our farm's productivity has increased 30 to 40 per cent in the last five years," says, Kapil, Dhoot's younger son, as she shows a paddy plantation tutorial on his smartphone.

As many as 286 custom hiring centres have been established in the state and another 450 are in the pipeline. About 200 villages have been developed as fully mechanised. They are called Yantradoot Gram. A state Organic Production Marketing Council has been established. An organic farming programme is being implemented in 32 blocks of 16 districts.

There are scientists-turned-entrepreneurs who are building technologies which can enhance farm productivity. Thirty-two-year-old Neelesh Patel has worked on a bio resonance technology for seven years. The technology promises to increase the oxygen content in the water thereby enhancing the fertility of the soil. Patel's company, Liquid Energy, is running a test at a state-run farm in Phanda village, about 15 km from Bhopal.

"Everyone likes to lay a foundation stone, this (completing irrigation projects) needed a real political will"

This farm also showcases organic farming and has a biogas plant for generating power. "We don't want to go the Punjab and Haryana way. We want to reduce the use of fertilisers," says Mohan Lal, Director, Farmer Welfare and Agriculture Development, Madhya Pradesh.

He already has a huge head-start. The average use of fertiliser in Madhya Pradesh is just 850 gm per hectare. That is a small fraction of the national average of 150 kg. Punjab and Haryana, the opposite of a role model for Madhya Pradesh, average 250 kg per hectare.

As many as 20 of the 50 districts in Madhya Pradesh are dominated by their tribal population. They don't use any fertiliser. The state is educating its farmers on the merits of using less fertiliser and making their own manure.

Naturally, Madhya Pradesh is the largest producer of organic produce in the country, accounting for 40 per cent of the total. There is a long way to go, though - only 1 per cent of agriculture in the state is organic.

However, this story, like all stories, has a flipside.

Among all states, Madhya Pradesh has the lowest average rural wages for both men and women, even lower than Bihar. And, despite the likes of Sonu Devi, farm mechanisation in the state remains low. That can be mainly because of farm power still being low despite having gone up from 0.84 kw per hectare to 1.54 kw. Farm power in Punjab, Haryana and Gujarat is more than 3 kw per hectare.

Besides, the industrial sector in the state has seen tepid growth since 2009, expanding by only 2.1 per cent in 2013/14, down from 5.5 per cent in 2012/13. Has industry got neglected as Chouhan, the agriculturalist, chased farm growth?

But one thing is for sure that Chouhan's agricultural model can be replicated by other states. "The model is based on increase in irrigation investment and support prices," says N.R. Bhanumurthy, Professor at the National Institute of Public Finance and Policy. "States like Gujarat have made large irrigation investments. Eastern states can really benefit with higher spends on irrigation; ensuring timely water and electricity could lead to higher productivity," he adds.