By merging its PC and printer businesses, HP has consolidated its lead in both segments in India. But there is no room for complacency.
Sunny Sen | Print Edition: Sept 29, 2013 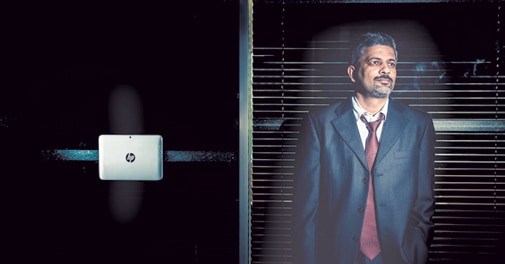 "It's easier to generate revenue. The trick of the trade is to balance revenue and profitability: Rajiv Srivastava, Head of Printing and Personal Systems Group, HP India Photo: Vivan Mehra/www.indiatodayimages.com

Rajiv Srivastava laughed as he shared a few light moments with one of the journalists he had invited for a select press briefing on August 26. The meeting, in a roof-top conference room at the Oberoi Hotel in New Delhi, was far quieter than the glitzy product launches the Hewlett-Packard top gun usually holds in large banquet halls. But the head of the technology giant's printing and personal systems group in India was in a joyous mood. After all, HP had become No.1 in all eight categories of its personal computer and printer businesses in India for the first time in its history.

Until recently, however, the situation was a lot different. HP had lost its leadership position in India's PC market in 2010, as Asian rivals Lenovo and Acer intensified competition with their cheaper products. Besides, smartphones and tablets were eating into PC sales.

India wasn't an exception, though. Globally, too, the Palo Alto, California-based company has been facing headwinds. Then, in March 2012, Meg Whitman, HP's President and CEO, decided to merge the printer and PC divisions to save costs and boost growth. In India, this has made all the difference. Srivastava, who was heading the PC business in India at the time, was chosen to spearhead the merged division.

The performance of the printing and personal systems group (PPS) is important for HP globally - the company gets nearly half its revenue from this division. In India, it is even more critical as the group contributes almost two-thirds to sales. Srivastava's top priority was turning around the PC business, which makes up two-thirds of revenue from PPS. The task was difficult. He had to push sales of desktops and notebooks at a time when consumer preference was shifting toward sleek smartphones and tablets that Samsung Electronics and Apple make. According to market research firm International Data Corporation, sales of smartphones in India soared 166 per cent from a year earlier to 9.5 million during the April-to-June quarter. In comparison, PC sales grew 24 per cent to 3.5 million.

Srivastava was not eyeing revenue growth. HP's revenue in India grew even when it lost market share. Its sales rose 24 per cent in 2011/12 to Rs 28,854 crore (about $4.3 billion at current exchange rates), according to technology magazine DataQuest. This was more than the combined India revenue of hardware giant IBM, chipmaker Intel and software company SAP for that year. But, it is still a fraction of HP's $120 billion global revenue. "It's easier to generate revenue by offering discounts," says Srivastava. Instead, he strived for efficiency, performance and profitability. "The trick of the trade is to balance revenue and profitability."

The merger of the printer and PC divisions has boosted HP's India business. In printers, its market share has risen to 60 per cent. Also, the printer business operates on a model where the company takes care of the machine, paper, ink and maintenance for a monthly fee. For HP, it means higher margins. But this model could not be replicated for PCs, as they are one-time purchases and have annual maintenance policies.

Before PPS was created, marketing and sales teams of PCs and printers worked independently and did not contribute to each others' growth. Also, the 300 HP World brand stores focused more on selling desktops and notebooks. That has changed now. Shakti Tripathy, owner of Bhubaneswar-based HP dealer Spectra Vision, says his sales have risen 30 to 40 per cent and profitability has improved since the merger.

Srivastava streamlined the distribution network as he realised that consumer behaviour was changing. Only 35 to 40 per cent of sales were coming from the top eight cities instead of 75 to 80 per cent a couple of years ago. Growth was in smaller cities and towns. HP has added about 100 more cities to cover 700 cities and towns post the merger. This makes its PC and printer sales network the largest in India. On demand, products reach the HP dealers in 24 to 48 hours. Before the merger, product delivery would take up to 10 days at times in some smaller towns.

Srivastava also integrated the sales and marketing teams. Earlier, clients had to deal with different HP executives for PCs, printers and maintenance. Now, a customer talks only the account manager at HP. That has helped in faster decision-making. Shaibal Kumar Chatterjee, Executive Vice President of administration and IT at ICICI Prudential Life Insurance, recalls how HP once lost out on a contract because its executives wanted a week to get approvals. "As a customer we were confused whom to deal with earlier," he adds.

Nitin Hiranandani, Director of Printing Systems at HP India, says the company is using the printer business "as a door opener" to sell more products to enterprise clients. "From promotion to display, all have the same plan for both PCs and printers," adds Raj Kumar Rishi, Senior Director of Consumer Channel Strategy. HP is increasing its printer stock with large format stores and online retailers. "I have an entire range to give to retailers like Flipkart," says Rishi. To push PC sales further, Srivastava started chasing government projects. Last year, Lenovo became the No.1 PC vendor in India on the back of a contract from the Tamil Nadu government to supply 900,000 laptops for students. But the Chinese giant's market share began dropping once the contract ended and as it began focusing on smartphone sales, says a technology analyst with a consultancy firm. This helped HP claw back its share. In the quarter ended December 31, 2012, the US company regained the top slot. In February, HP got a contract to supply 1.5 million laptops to the Uttar Pradesh government in a deal estimated to be Rs 2,850 crore. That propelled its market share to 34.1 per cent in the April-to-June period. Even without this contract, the company is still No.1 with around 19 to 20 per cent market share, says Vinay Awasthi, Senior Director of Personal Systems at HP India.

The gain in market share has come without any price cuts. Srivastava says his products are at least five per cent more expensive compared to competitors. This shows customers are willing to pay a premium for HP products. That trend, say analysts, will likely continue. "There will be HP at the top selling premium and mass products, followed by others like Acer, Lenovo and Asus," says Sanchit Vir Gogia, Chief Analyst and CEO of technology consultancy Greyhound Research.

HP's main challenge now is to hold on to the market share it has gained. Awasthi agrees there will be a fall in market share once the laptop shipments in Uttar Pradesh end. "But then the whole market will also contract," he says. He is now getting ready for a second tender for notebooks in Tamil Nadu next quarter.

Srivastava is gearing up for a bigger battle - touch-screen laptops and tablets. He admits HP made mistakes when it launched touch-screen devices in 2009 based on the Windows operating system. "We screwed up," he says, without mincing words. "We got a lot of those devices and thought they would just fly off the shelves." They didn't. HP recently also launched a device for enterprise clients where the screen would break off from the keyboard to become a tablet, but that didn't grab eyeballs either.

Srivastava feels now is the right time to swarm the market with tablets. He has five to seven models at different price points ready to roll out. The launches will test his skills again. He will have stiff competition from Apple and Samsung. "We are lacking in a lot of places," he says. "Are we launching products in the market fast enough? Probably not." But the future will be brighter, he assures. There are 15 products in the PC and printer categories lined up for next year. Srivastava is not resting on his laurels. In the hyper-competitive tech industry, he can barely afford to.