HR leaders from Delhi discussed the need for newer strategies to prepare for the future.
Team BT | Print Edition: May 8, 2016 March 9 was a Wednesday, but that did not stop a horde of HR executives making a beeline to Delhi's ITC Maurya, where the Business Today Knowledge Forum on Human Resources was being held, with panel discussions on two current and relevant subjects (a) The job crisis: Where will the jobs be if everything gets automated? (b) Talent acquisition: Changing environment, changing strategies.

The first topic started off with Siddhartha Singh, Senior Vice President and Head (BPO), NIIT Technologies, saying that till two years ago, people thought services would not get impacted by automation. "But two years ago, robotic process automation came in, which involves use of virtual robots, and 30-40 per cent of services jobs will get automated in the next three to four years."

Tapan Mitra, Chief Advisor, Apollo Tyres, said that new technologies and automation will certainly displace some jobs to some extent. "When we set up a new plant, we will obviously look at the best of machines. So, the manpower in our newer plant is one-third that of our older plant." At the same time, he pointed out that there are jobs done by unskilled labour, which continue despite the robotics and automation. Automating all processes also entails huge costs, he said.

Ajit Kumar, Head-HR, Philips India, said tremendous changes were happening in the healthcare industry, some of them in cardiovascular. Today, the number of heart surgeries has shot up exponentially compared to two decades ago, and much of this has to do with automation. But he has not seen major job loss happening because of automation.

Amit Kumar Srivastava, Head of Sales-India, SE Asia and Middle East, Bosch, said that the advancement of automation will bring to the fore new kinds of jobs. "For example, you will find the quality control department flooded with industrial scientists. If robots come, who is going to program and control the robots? So, you will have robot coordinators," he said, adding that there will also be products as a service, so a different kind of sales force will come in. 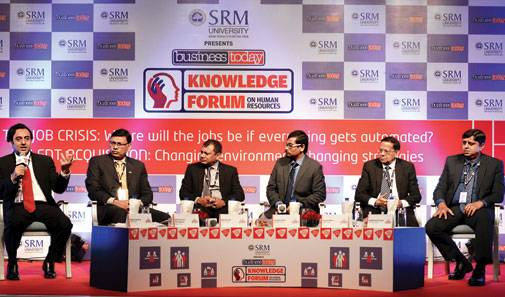 The second discussion, on talent acquisition strategies in a changing environment, began with Jagjit Singh, Chief People Officer, PwC India, saying that the way HR hires, evaluates performance and develops people, is undergoing a huge transformation and that hiring will not remain the way it is today. "Contingent hiring models will become very evolved," he said, adding that as per an internal forecast, not more than 60 per cent of the people at PwC India will be on its rolls by 2025.

Biplob Banerjee, Executive Vice President - HR and CSR, Jubilant FoodWorks, said that talent acquisition has to be seen from a broader definition. "There are multiple issues and dimensions in this topic," he said. "With technology and multiple generations working together, it is going to be a challenge for every organisation in terms of how it is looking at preparing for the future."

P.K. Joshi, Director-HR, HPCL, said that talent is very different from what we are looking at. "Talent is innate, inborn in a person. So, the right word to my mind would be talent invitation," he said, adding that HR needs to look at hiring as an integral part of the entire HR ecosystem.

Gautam Anand, Senior Vice President-HR, Bharti Airtel, remarked that talent acquisition is not the role of HR. "Talent acquisition is actually the role of everybody," he said. He believes that if the business leader has not played a role in getting talent in, then "it is a little bit of a recipe for disaster". He also said that people are measuring where they will work with the maximum impact they can make in the shortest time, which also impacts hiring strategy.

Lalit Bhagia, Karma Officer, Founder and CEO, Myrefers.com, agreed with Anand in that hiring is not the sole preserve of HR, and that we are in this speed-dating and gig economy where people are very picky about where and how long they want to work. "And here we are, trying to hire these people using very traditional means," he said. So, the challenge is to crack the right hiring strategy for these modern times.