As more and more residential properties remain unsold, companies and PE players may have to rethink strategy. Rahul Patil, 36, a marketing executive with a big media group in Mumbai, changed his mind about buying a house at Mira Road - on the city's outskirts - at the last minute. The reason was two-fold: first, a general apprehension of forthcoming retrenchments across corporate India - if it happened to Patil, he would find it impossible to repay his housing loan. But more importantly, he knew he would lose nothing by delaying. "I don't know if real estate prices will fall in the near future, but they sure won't rise any time soon," he says.

It is a sentiment widely held in the residential real estate market. "Between 2009 and 2013, real estate prices were escalating every month and the developer was king," says Sharad Mittal, Director and Head, Motilal Oswal Real Estate Fund. "Property prices became unaffordable for most people. Prices remain the same today, and it is my sense that in micro markets like Lower Parel in Mumbai, they will stay the same for the next three to four years. This has led to serious trust deficit and affordability issues for the industry."

Most important is the problem of cash flow. "The slow pace of sales over the last 24 months is causing cash flow mismatches for developers," says Vikas Chimakurthy, Senior Executive Director, Kotak Realty Fund. Caught in a pincer are private equity (PE) players who have invested in residential real estate. With inventories remaining piled up, they are forced to stay invested - exits, with decent returns, are extremely difficult. Chimakurthy believes that more than half the estimated $3 billion PE debt investment in residential real estate is unable to get refinanced. "These non-refinanced developers have to either bring in more equity and reduce some portion of their debt, or reduce prices of properties to increase the pace of sales to service existing debt obligations," he adds.

Not surprisingly, PE investment in residential real estate was marginally lower in 2016 compared to the previous year - $2.8 billion against $3 billion, according to market research firm, Venture Intelligence. Even the capital invested was more debt than equity. To raise cash, developers are resorting to all kinds of inducements, short of actually slashing prices. Omkar Realtors, for example, has taken the previously unheard of step of giving buyers possession of flats at its premium project, 'Omkar 1973', in Worli, Mumbai, on payment of just 25 per cent, the rest payable in instalments over the next four years.

The only PE investors in residential real estate who are not complaining are those focused on the affordable housing segment. "We have understood the India story, which is all about the urbanising middle class in the six or seven top cities where jobs are being created," says Sunil Rohokale, CEO, investment and wealth management company ASK Group. "Investing in the rest of India does not make sense for a PE player. Despite the slowdown in the industry, there is still interest in the `50 lakh to `1 crore housing segment and that is the area we will continue to invest in." ASK is currently raising `2,000 crore - along with a `1,000 crore 'green shoe' (additional shares) option - from family offices, high net worth (HNI) individuals and global institutions - its fourth pure equity real estate fund. Other industry experts agree. "One should stick to investing in homes which cost between `3,000 and `6,000 per sq. ft.," says Mittal of Motilal Oswal. "For anything higher, there isn't much demand, while anything lower squeezes margins." Ajay Jain, Executive Director, Investment Banking and Head, Real Estate Group at financial services firm Centrum Capital, believes the range is a little higher, `4,000-8,000 per sq ft. "It is the only lucrative space," he says. "Only 18 months ago, even `8,000-15,000 per sq. ft. houses were in demand, but no more." As it happens, most PE investment in residential real estate is in the premium bracket - with inevitable results. "Most investment has been in housing for the high income group," says Rajesh Krishnan, CEO and Managing Director at housing investment firm, BrickEagle. "This category isn't seeing any sales. The PE players are stuck."

Exits are still taking place, but not in the traditional manner - mostly, they consist of PE players selling out to non-banking financial companies (NBFCs). In the last two years, NBFC exposure to the real estate sector has more than doubled to `125,281 crore in March 2016 from `54,730 crore in March 2014.

For developers, profit margins are down from 20-25 per cent until 18 months ago to 15-20 per cent now. Financing is not only more difficult but also more expensive. Their priority is to complete ongoing projects as investors are reluctant to buy property that is under construction. While in 2015, 65 per cent investment in real estate went into the residential segment, it is now only around 36 per cent. "Lenders are also unwilling to fund housing projects outside city limits unless the developer has a strong track record and a high reputation," says Jain of Centrum. Not only are developers inherently disinclined to lower prices, but it is also now more difficult for them, as input costs have increased. The implementation of the uniform Goods and Services Tax (GST) later this year is likely to raise costs by another 5 per cent or so. "We've seen price correction in some micro-markets like the NCR, but in other places, especially Mumbai, there isn't much scope to lower prices," says Mittal of Motilal Oswal. "Between 2009 and 2013, most developers bought land at a high cost, and they cannot afford to sell their flats cheaper unless they are prepared to make losses." He says, "While price correction doesn't seems to be hogging the limelight, time correction will continue."

PE firms in the residential sector have reduced their expectations of returns to 12 to 18 per cent, compared to 20 to 22 per cent in 2014. Some are also handholding developers, performing the dual roles of consultant and investor. "We have brought down the ticket size of projects we participate in and are investing with developers who have land and approvals," says Krishnan of BrickEagle. In any case, BrickEagle's investment in projects is in the range of 5-10 per cent of the cost and only at the pre-launch stage. It is also very clear about investing only where the cost of homes is between `10 and `30 lakh. This strategy is different from what they began when they used to buy land and ask developers to develop. "The money used is for marketing and advertising," he adds. "While developers' margins have come down to about 15-20 per cent, we are able to maintain an internal rate of return of 20 per cent." There is money to be had in the market, but developers have had to adjust in numerous ways to get hold of it. "There is no dearth of money but the rules of the game are changing," says Jain of Centrum. "Unlike before, when 50 to 60 per cent cash income came from saleable property, today only 25 per cent comes from such property. The rest is debt raised from financiers or PE players. This is because consumers are interested largely in completed projects. PE players are willing to put in 50-60 per cent project cost provided the developer has a record of delivering on time."

Investors have still not entirely written off residential real estate. "We still get enquiries," says Vinayak Burman, Managing Partner, Vertices Partners, a Mumbai-based law firm. "Investors are keen to take advantage of the current situation when companies and projects are reeling under stress so as to get better terms, but their approach is naturally cautious. There is lot of dry powder waiting to come into the sector, but there is a lot of apprehension. Equity deals based on land ownership have slowed down as buying capacity of land is low. Future receivables-based deals become sticky unless there is a sudden surge in demand due to price correction." 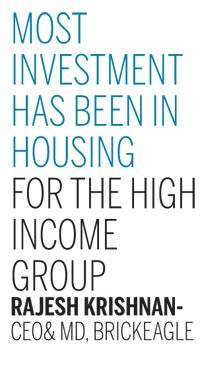 While refinancing and restructuring is happening, most experts expect mergers and acquisitions to catch up. "The market grapevine says PE funds want to acquire projects for 30 to 40 cents to a dollar," says Burman. "While developers aren't bowing to their demands yet, they will have no choice if cash flow problems remain and banks start to crack the whip, more so with the bankruptcy code coming into effect. Banks want a healthier balance sheet. This could well lead to a surge of transactions in the sector." For the present, however, the game plan of PE players is simply to exhaust the inventory of developers as soon as possible, see to it that underdeveloped projects are completed fast and thereafter make a quick exit.