Handicraft retailer Fabindia is turning thousands of its supplier-artisans into shareholders in a unique experiment that seeks to empower and enrich some of India’s poorest people. "Supplier-region companies" set up across India by the Rs 260-crore retailer are part of this ambitious programme. Kapil Bajaj reports.

On a drizzly Friday morning, on June 20, 2008, in Chanderi town of Madhya Pradesh’s Ashok Nagar district, scores of people from the local weavers’ community are gathering at Sri Kunj guest house for an important business meeting. Their number will swell to about 250 by the time the meeting starts at 11.30 a.m. In the next hour or so, these men and women, who represent the nth generation of an age-old tradition of handloom work, especially known for the famous, silk-and-cotton Chanderi sarees, will have their first experience of the ways of a modern business organisation. Community ownership: Weaver-women holding share certificates in their hands
As shareholders of DAH Chanderi Ltd, attending the first Annual General Meeting of the company, they will listen to the directors talking about not only things like quality control and timely production, but also less familiar matters such as balance sheet, profit and loss account, dividend, and change of auditors. The directors of DAH Chanderi will also call for the approval of all resolutions, giving the weavers (including those who are barely literate) a first-time feel of the statutory privileges of the shareholder of a company.

The weavers’ acculturation to the formalities of a corporate organisation is, after all, one of the important objectives in establishing DAH Chanderi, one of the 17 “supplier-region companies” (SRCs) set up across India by Fabindia, the Delhi-headquartered Rs 260 crore retailer of handloom garments and handicrafts.

These SRCs, also described as “community-owned companies”, are part of Fabindia’s ambitious plan to organise its expanding supplier base into corporate entities and enable thousands of homebased artisans in rural areas, who are mired in economic backwardness, to become shareholders.

Up to June-end 2008, DAH Chanderi and other SRCs had sold shares at par value of Rs 100 per share to about 9,000 artisans, who also get assured Fabindia orders through these companies. The 86-store strong retailer plans to set up dozens of more SRCs and sign up a total of at least one lakh artisan-shareholders by 2010 in step with its own expansion and in line with Managing Director William Bissell’s vision.

At the AGM of DAH Chanderi, the general mood is that of a happy social gathering. Manu Hasija, the CEO and a Director of DAH Chanderi, has even arranged samosas and tea. At the entrance, two men busily check the identities of a crowd of shareholders—some of them have come with their children—before allowing admission.

William Bissell
Lending more importance to the occasion is the presence of the media (the local press and this Business Today writer and his photographer colleague) and even two representatives of the International Finance Corporation (IFC), the private sector arm of the World Bank, who are here as interested observers.

“Since you have been facing the problem of not getting the right quality of cotton yarn at the right price, we have arranged to get all our supplies from Coimbatore. All the weavers we have spoken to are very happy with quality and price of the Coimbatore yarn,” Prakash Tripathi, Director of Artisans Microfinance (AMFL), Fabindia’s investment arm and main promoter of the SRCs, tells the weavers, who respond by clapping.

More clapping follows as Tripathi reads out in Hindi the numbers— turnover: Rs 1.08 crore, PAT: Rs 2,20,000, and (most importantly) a dividend of 10 per cent—from the audited annual report. “On an average, DAH Chanderi has been getting orders worth Rs 37 lakh a month from Fabindia. This will expand as orders from Chanderi increase and other handicraft centres in Madhya Pradesh, such as Bagh and Maheshwar, chip in,” Tripathi, also a Director in the SRC, later tells this writer.

The company has been coordinating with the weavers to get Fabindia’s orders fulfilled, control quality, arrange for some common production resources (such as dyeing and plying of yarn, sewing for home linen fabric, even packaging) and logistics.

Currently operating from rented premises, DAH Chanderi has also purchased land where it plans to build a “resource centre” (a kind of R&D centre) and other facilities. Shoib Ansari, one of the two representatives of the weavers on the board of directors of the SRC, says Fabindia’s entry into Chanderi has meant diversification of products away from sarees (and so more demand), fair and transparent pricing of fabric, assured orders, and the promise that DAH Chanderi will address the production-related problems faced by all weavers, such as sourcing of yarn. Mano Bai, a middle-aged, illiterate woman, proudly shows this writer her share certificate and a dividend cheque of Rs 100, received for the 10 shares that she holds in DAH Chanderi. (Many of the weaver-shareholders don’t have bank accounts to deposit their cheques. After the AGM, Tripathi is besieged by people wanting him to get their bank accounts opened).

“Most of the artisans we work with have never known any income source in their lives other than a daily or per-piece wage. It’s a huge leap for them to own shares in a company,” says Smita Mankad, the MD of AMFL, who is busy stabilising the operations of 17 SRCs that have been set up in India’s craft-rich regions since October 2006. 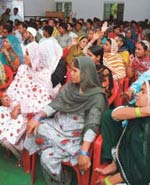 Artisan-shareholders: The first AGM of DAH Chanderi
The articles and memorandum of association of an SRC allow up to 49 per cent of the equity to be held by AMFL, 26 per cent by artisans, 10 per cent by employees, and 15 per cent by external investors, which tend to be social venture capital funds. The authorised capital of an SRC, whose board has one or two artisan-directors, ranges from Rs 40 lakh to Rs 1 crore. “The idea is to offer shareholding at par value to as many individual artisans as possible, rather than shareholding by artisans’ groups, trusts, or NGOs, who will generally have to buy at premium,” says Tripathi.

It is the biggest bull of all