Thirty-two kilometres from Bangalore, off the Mysore highway, is Bidadi. This small town plays a vital role in the Asia-Pacific strategy of Toyota Motor Corp, the world's largest carmaker by number of units sold. Although India contributed less than one per cent of the Japanese carmaker's $232 billion global revenues in 2011/12, the company is investing Rs 898 crore in Bidadi to increase production capacity nearly 50 per cent to 310,000 vehicles a year by March 2013.

MUST READ: Interview with Hiroshi Nakagawa

It is investing another Rs 600 crore in its ancillary, Toyota Kirloskar Auto Parts, in Bidadi to start manufacturing transmission and engines for small cars. The new units will produce 110,000 engines a year for cars such as Etios and Liva, starting August, and 240,000 transmissions a year from December. 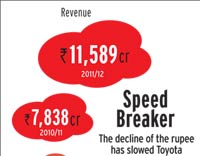 Click here to Enlarge
Toyota displaced General Motors in the January-to-March quarter as the world's biggest carmaker by the number of units sold. Among Toyota's subsidiaries in the Asia-Pacific region (excluding China), India occupies sixth place, but Toyota wants to bring it up to the third spot by 2020. India, which currently accounts for 10 per cent of Toyota's sales (1.7 million units) in the region, will play a crucial role in this climb. "As our production capacity increases, the important markets for us to increase volumes will be India, Brazil and Russia," says visiting Toyota Managing Officer, Kyoichi Tanada. By 2020, Toyota wants to be able to make a million units a year in India, says Tanada, who oversees business in the Asia-Pacific region and Australia.

Toyota will also expand its dealer network from the present 173 outlets to 225 by March 2013. "Production and sales will be driven by Thailand, Indonesia and India," he says, referring to the Asia-Pacific region. "Our aim is to see India catch up with Thailand and Indonesia." In 2010, Toyota's sales in Thailand were four times those in India, and Indonesia's were three times. Australia, Malaysia and Taiwan were ahead of India, too.

Click here to Enlarge
"Volume-wise, India is not big, but in terms of the speed of growth, it is a big contributor," says Hiroshi Nakagawa, Managing Director of Toyota Kirloskar Motor, a subsidiary in which Bangalore's Kirloskar Group holds an 11 per cent stake. Still, it is up against rivals Maruti, Hyundai and Tata Motors, which together control 86 per cent of the Indian market. Toyota's share in the last financial year was 6.12 per cent, with a high dependence on one model - its Innova multi-utility vehicle, which accounted for 38 per cent of its revenues.

"Our target is a 10 per cent market share in India in five years," says Tanada. This was why the company entered the mass market with the Etios sedan in December 2010 and the Etios Liva hatchback last year. In 2011/12, Etios was the second-largest selling super-compact sedan after Maruti DZire. The Etios models are the beginning of Toyota's strategy to make half its global sales in emerging markets by 2015, up from the current 40 per cent. Nakagawa says: "Because of the Etios, we had to open dealerships in semi-urban areas." Now that it is in the mass market, Toyota needs to quickly increase production. Maruti's annual production capacity is 1.5 million units, Hyundai's is 630,000 and Tata Motors, 615,000.

With Toyota's Bidadi auto ancillary set to increase production, the Etios and Liva petrol variants will be 90 per cent localised, up from 70 per cent at present. "Our goal is 100 per cent localisation, but no manufacturer has ever achieved that," says Nakagawa. "You will still require some advanced material like a sensor or chip." He adds that planning is necessary to adjust production. "But there is no stability in auto fuel policy. That is a cause for concern." Click here to Enlarge
Toyota Kirloskar's profitability hinges on how quickly it can increase localisation. Only about half of the Innova, for instance, is made in India. An Innova oil filter, imported from Thailand, costs three times as much as a Xylo filter. Localising engine and transmission manufacturing will help Toyota cut overall cost by 11 per cent, says Shekar Viswanathan, Deputy Managing Director, Toyota Kirloskar. Cost reduction is important, given the rupee's slide against the dollar. After five years of profits, Toyota Kirloskar reported a Rs 27-crore loss on a turnover of Rs 11,589 crore in 2011/12, and is likely to report losses this year, too. "Every rupee increase in the dollar value makes our imports costlier by Rs 90 crore," says Viswanathan. The rupee has slipped over 25 per cent against the US dollar since July 2011.

Toyota's rivals are, of course, anything but idle. They are ramping up capacity, and increasing the number of models in several segments. M&M's refreshed Xylo and the new Maruti Ertiga are challenges for Toyota. M&M's XUV500 competes with the Innova and BMW's X1 is a rival to the Fortuner. Toyota's utility vehicles could face further pressure when M&M's South Korean acquisition, Ssangyong Motor, helps the Indian carmaker introduce the Rexton, this year. Toyota also needs to beef up its mid-range sedan offerings in India. Sales in this segment are brisk, and Toyota has nothing to rival the Hyundai Verna, Tata Manza, Maruti SX4, Skoda Rapid and Nissan Sunny.

Even so, it looks like Toyota is in a good place. "When we started production in 1999, the capacity was 25,000 vehicles a year," says Vikram Kirloskar, Vice Chairman, Toyota Kirloskar. "The volumes we are adding are huge." By selling 160,203 units in India in 2011/12, Toyota has overtaken Volkswagen (78,281 units), Ford (92,665) and General Motors (110,048). It is now the fifth-largest carmaker in India in terms of market share (see Top Five Carmakers by Market Share). If it maintains its pace, it could pip M&M to fourth place next year. "It is quite possible Toyota might overtake not just M&M, but also Tata Motors in the next three to five years," says Mahantesh Sabarad, analyst at Fortune Equity Brokers.

Toyota is preparing itself and its dealers and vendors for growth by stepping up training at all levels. "Hiring and training people will be a big challenge over the next two years," says Vice Chairman Kirloskar.

Sandeep Singh, Deputy Managing Director who oversees marketing at Toyota Kirloskar, says: "At any point, about 100 Indians are in Japan, Thailand and Singapore." About 60 Japanese experts are in India, too. Toyota has no plans to make entry-level cars here, but over the next four years, it plans to introduce eight compact models in emerging markets. "Some will be made in India," says Tanada.

mosimageKarnataka car dealer M.P. Shyam says although auto sector growth has been negative in the last two months, Toyota products have waiting periods. Besides speeding up production, Toyota needs to introduce models for value-conscious Indian consumers, he says. "It will need to come up with diesel cars in the A segment and more diesel models in the B segment."

Toyota has no plans for research and development in India, but Tanada does not rule out the possibility. "It all depends on the models we would want to introduce," he says.
Tags: Toyota | Toyota Kirloskar | M&M | Xylo | Innova | XUV500

Should PDS be replaced with direct cash transfer?