ITC, Godrej and the Essar Group are among a host of new corporate hedgers, and many of them have actually taken up memberships on domestic bourses like the MCX and NCDEX. Why are they getting into this slippery terrain? A report by Anand Adhikari.

There’s a new breed of hedgers on India’s commodity exchanges. The usual gaggle of cotton, jute and spices hedgers has now been joined by the “suits”—corporate executives working for large, often blue-chip, corporate houses. They are professionals who burn the midnight oil to ensure that their employers’ core businesses—in iron and steel, packaged foods, edible oils and even aviation—continue to run seamlessly, and, more importantly, profitably.

Confused? Let us explain. Over the last two-to-three years, the biggest dilemma in corner suites across India Inc. has been: how do we control our input costs? Raw material prices—of metals, edible oils, crude and refined oil, vegetables, cereals, coal, etc.—have risen exponentially during this period, causing the corporate world immense pain. Says H. Shah, Associate Director (Risk Advisory Services), Ernst & Young: “Any abnormal rise in the prices of inputs not only squeezes margins but also impacts the cash flows of a company.” 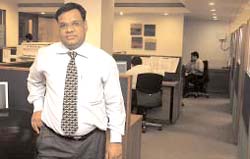 Sumesh Parasrampuriapuria
The big boys join the game
ITC, Godrej and the Essar Group are among a host of new corporate hedgers, and many of them have actually taken up memberships on domestic bourses like the MCX and NCDEX. A year ago, the Essar Group decided to hedge key inputs like zinc, graphite, lead, natural gas, etc. “Having seen the volatile combtmodity markets over the past few years, we are now experimenting to find out the effectiveness of hedging,” says N.S. Paramasivam, Head (Global Treasury), Essar Group. Other big corporate houses like the Ispat Group, Binani Zinc, Indian Oil Corporation, Larsen & Toubro, Suzlon, Hindustan Copper and Global Telesystems are also taking baby steps in that direction and trying out the effectiveness of hedging (See Into the Bandwagon).

But not many of them want to talk about it as hedging is still perceived by many as akin to speculation. The Delhi-based Dabur India started hedging in a small way in commodities like sugar and guar about two years ago. “We were among the first FMCG companies to try out hedging as a tool to protect ourselves from volatile input prices,” says Jude Magima, Executive Director, Dabur India. How hedging works
Assume, for example, that a car maker has a 20,000-car export order at a fixed selling price over the next three months. If steel prices move up abnormally, its margins will get squeezed. So, the car maker buys a steel futures contract for the quantity of steel it needs to execute the order on a commodity exchange. If steel prices go up, the value of the futures contracts will also rise; so, the company makes a profit in the futures transaction. 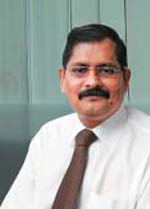 N.S. Paramasivam, Head (Global Treasury), Essar Group
Now, in the real world, the company needs to buy steel from the physical market to make cars. Here, it incurs a loss as prices have moved up since the signing of the export order, but this loss is compensated by the profits made in the futures market. Sumesh Parasrampuria, Chief Business Officer, Multi-Commodity Exchange of India (MCX), puts the record straight by drawing a distinction between hedging and speculation. “Hedging allows you to offset an existing price risk by taking an opposite position on a commodity exchange whereas speculation means taking only a one-way position,” he says.

Globally, companies use hedging quite liberally to protect their margins. “Indian companies are now gradually coming forward to hedge their input costs,” adds Parasrampuria. Incidentally, Indian companies are safer than their global counterparts on one count: they don’t have to carry any foreign currency risk, which hedgers on the New York Metals Exchange or the London Metals Exchange do. 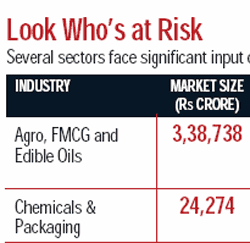 The perils of globalisation
Volatile raw material prices have emerged as a big risk for companies (See Look Who’s at Risk). This is compounded by the fact that global cues, and not domestic factors, now dictate the prices of most commodities. And that is worrying for India Inc. since it still sells a major portion of its inventory in India. In the past, when global linkages were practically non-existent, companies partially skirted such volatility and price inflation by buying in bulk when prices were moderate.

That option, however, is no longer viable beyond a point as high inventory and interest costs and wastage (in the case of perishable commodities) can offset any gains. That’s another factor pushing Indian companies to experiment with hedging. Companies are, therefore, beefing up their treasury desks by bring in professionals who understand hedging and risk management. Some others are leaning on commodity brokers like Motilal Oswal Commodities, Karvy Comtrade, Kotak Commodities, Religare Commodities, etc., to hand hold them through the initial learning curve. “There is now a growing awareness among managements on the need to hedge inputs likes copper, zinc, aluminium, coal, fuel and other commodities,” says E&Y’s Shah, whose firm advises companies on the issue. 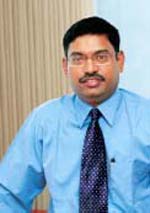 Jude Magima
The challenges
Hedging offers Indian companies many advantages, but it’s also an unexplored world for them. L&T recently shocked the market by declaring a Rs 200-crore hedging loss in zinc. That is the flip side of the hedging mechanism. Companies have to be very careful in drawing a line between hedging and speculation. RBI regulations stipulate that they must have proper risk management policies, like MIS and margining systems, and board approvals in place. That’s because hedging can cause large financial losses if the bets go wrong.

Then, companies can also get stuck with high-cost inputs in a falling market if they misread the price signals. That’s why companies hedge only a portion of their future requirements of raw materials. “We normally hedge only about 30-35 per cent of our input requirements at a time with a clear stop loss/gain mandate,” says Dabur’s Magima. Adds Karvy’s Mittal: “Some companies are testing the waters by hedging 15-20 per cent of their requirements. But some others are hedging up to 100 per cent.” E&Y’s Shah warns against this. “Companies should hedge only within the limit of their risk appetites, in sync with procurement budgets, using appropriate instruments and benchmarks.

Done well, it should be a no profit-no loss game. If, however, one exceeds the brief and enters the speculative zone, there is every possibility of making huge gains or equally large losses,” he says. Still, analysts say there is only a limited risk of that happening, as India Inc. is moving cautiously on this front. And that caution may help companies ride out any future spikes in input prices.

Are Indian Microsofts in the making?