India needs to adopt clean technologies to arrest environmental degradation and become a trailblazer for the rest of the world.
Anilesh S. Mahajan | Print Edition: September 11, 2016 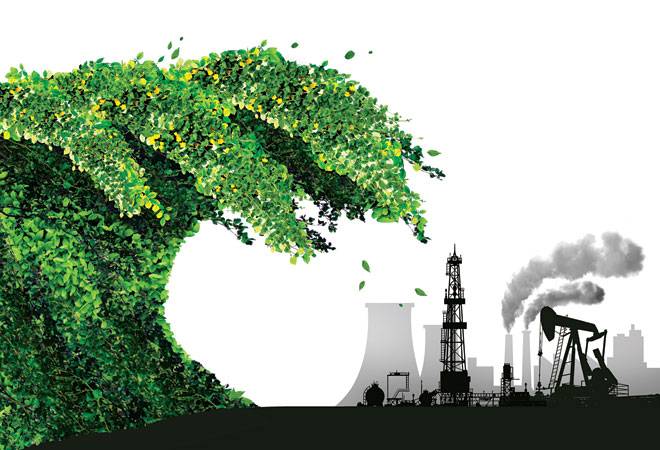 India has its task cut out. The country is among the biggest polluters of the environment globally and now has to cut its greenhouse gas emissions intensity (emissions per unit of GDP) sharply to meet its commitments to the UN climate body. Indeed, the country is the biggest emitter of harmful gases in the world after the US, China and European Union.

India has now made a commitment of cutting emission intensity by 33- 35 per cent by 2030, as compared with 2005. It is a big challenge and the country will have to go for major technological upgradation to meet the target. The judiciary and quasi-judicial bodies are also putting pressure on the Indian government to clean up its act.

Environmental degradation has become a major issue in the country. The Supreme Court had restricted the registration of high-capacity diesel accommodatevehicles, but later changed its stance. Environmental concerns have also prompted the government to clean rivers and other water bodies, haul polluters over the coals, and take other similar measures. In December 2015, at the 21st session of Conference of Parties, or COP21 in Paris, India unveiled its road map for Intended Nationally Determined Contribution (INDC) to UN Framework Convention on Climate Change (UNFCCC). The country promised to intensify efforts to reduce pollutants and look for more efficient and cleaner technologies.

An ambitious target of setting up 175 GW of renewable energy-based capacity by 2022, moving to the BS VI transport fuel standards, improving urban transport, making mining operations cleaner and more efficient, are among a slew of initiatives in that direction over the past three years. The United Nations Environment Programme (UNEP) in its Emission Gap Report recognised India as one of the countries on course to achieve its voluntary goal. But the real test will be in executing these policies.

In this year's Cleantech special package, BT takes a closer look at some clean technologies that can help India arrest environmental degradation and become a trailblazer for the rest of the world.

In the past few years, India's urban transport policy has focused on weaning people away from private vehicles. There is a thrust on Mass Rapid Transit Systems (MRTS). Currently, India has only 236 km of MRTS, or metro rail, in place but in the pipeline are about 1,150 km metro projects across different cities including Pune, Ahmedabad and Lucknow. Government officials believe that this will reduce dependence on diesel vehicles. Citing the example of the Delhi Metro, which has become the country's first MRTS project to earn carbon credits, officials at the country's environment ministry say that the project has the potential to cut emission of carbon dioxide (CO2) by about 0.57 million tonnes annually. Prime Minister Narendra Modi recently asked officials of the surface transport ministry to study the Chinese experiment with transit elevated bus or straddling bus. This can ease traffic on congested Indian roads and also combat pollution as it runs on electricity rather than a fossil fuel like diesel.

Meanwhile, key aides of Modi, Surface Transport Minister Nitin Gadkari and Oil Minister Dharmendra Pradhan have plans to implement more stringent emission standards, moving from Bharat Stage IV (BS IV) to Bharat Stage VI (BS VI) emission standards by April 2020. Both the ministers confirmed to Business Today that Indian automobile manufacturers and oil refineries are equipped to meet the target. Pradhan said that OMCs may need investments of roughly Rs 60,000 crore to upgrade by the new deadline. But the real challenge is for automobile manufacturers, who are under pressure to produce compliant vehicles. However, Gadkari believes that the technology is available with many of them, especially those who are already making BS VI compliant vehicles for exports, and the scale India provides would make the process affordable. He acknowledges that some manufacturers would require assistance in acquiring clean technologies to remain economically viable.

In the next 15 years, the country aims to make a bunch of Indian cities smarter, with superior urban infrastructure, smarter garbage and waste handling, electricity generation based on renewable sources such as rooftop and off-grid solar along with much smarter grid management. This requires huge investments but will reduce the dependence on coal-based generation and allow India to distribute electricity more efficiently. In the first week of August, the US Department of Energy (DOE) and the Indian Ministry of Science and Technology (MST) have both pledged to spend $1.5 million annually for five years to study smart grid and energy storage technologies. Private players from these countries will contribute another $1.5 million.

This is in addition to Indian negotiations with the premier US academic institution Massachusetts Institute of Technology (MIT) for access to cleaner coal technologies and NTPC's pact with the Australia-based Commonwealth Scientific and Industrial Research Organization to commission joint research activities for developing low emission energy technologies.

In the next six years, if 175 GW of renewable energy-based capacity comes up, India will be able to generate around 40 GW odd electricity and it means abatement of 326.22 million tonnes of CO2 equivalent per year. The cleaner technology interventions, such as improving the efficiency of solar panels, wind mills and storage capacity will obviously help combat pollution.

Nuclear technology is emerging as another focus area. India is making concerted efforts to enter the elite Nuclear Suppliers Group. The Indian target is to build 62 GW nuclear power capacity by 2032. If the plans work out, this will open up more opportunities to develop third-stage breeders and make way for thorium as a fuel. India has one of the largest reserves of thorium, and obviously it would like to develop this cleaner technology.

Indeed, there is a multi-pronged strategy to cut carbon emissions over the next one and a half decades. This includes a) sustainable living, b) cleaner economic development, c) reduced emission intensity of gross domestic product (GDP), d) increased contribution of non-fossil fuel based electricity, e) enhancing carbon sink (implies increasing the forest cover), f) adoption of new technology and methods, g) mobilising finance globally for technology upgradation and enhancing efficiency and h) technology transfer from global giants.

In many cases the technology is available off the shelf, and can help India and Indian companies catch up with the global standards. The Indian establishment also sees this as an opportunity for the country to seek investments for enhancing the skills to develop technologies at home. Many believe that the global pressure on India is unfair, as the country's carbon emission per capita, at 1.7 metric tonnes, is still among the lowest in the world. The corresponding figures for US and China are 17.6 and 6.2 metric tonnes. But the global focus on India helps the country access capital and cutting-edge technologies. And even gives the country a bargaining platform at multilateral fora, such as the NSG.

It will be challenging for India to balance the needs of its industry even as it continues to adopt cleaner technologies to cut pollution. In his monthly radio address to the nation, Mann Ki Baat, on July 31, PM Modi emphasised that India needs to embrace and develop innovative technologies. There may be a larger plan here. Recently, the government's in-house think-tank NITI Aayog along with technology major Intel agreed to set up 'Tinkering Laboratories' at the school level under the Atal Innovation Mission to focus on serving as a platform for promotion of world-class Innovation Hubs, start-ups and self-employment activities.

Modi is spot on. The future lies in new and cleaner technologies.

Solar technology is rapidly advancing globally. Why is India lagging behind?