Indian automakers are focusing hard on R&D. The results are showing.
By Chanchal Pal Chauhan | Print Edition: May 8, 2016 In its 33 years of existence, Maruti Suzuki India has launched scores of vehicles, a number of them iconic. So, why should the launch of one more - the compact SUV Vitara Brezza in early March this year - matter? It is because the Vitara has achieved a landmark - that of 98 per cent localisation - the first vehicle from the Maruti Suzuki stable to do so. And that in turn has been made possible by the increasing emphasis the company has placed on research and development (R&D) in India. The Vitara was created by a team of Indian engineers led by C.V. Raman, which has been working on the project since 2010, at a total investment of Rs 860 crore. "Our local engineers have done a decent job with the Brezza, though for fine tuning, some expertise from Suzuki, Japan, was required," says Kenichi Ayukawa, CEO and Managing Director, Maruti Suzuki India. Still, the Vitara design team has done well enough for the company to entrust three of its forthcoming models entirely to it. Similarly, for the first time, one of its models, Baleno, manufactured in India - no doubt with some Japanese supervision - is being exported back to parent company Suzuki Motor Corporation (SMC) for sale in Japan.

Indeed, Maruti Suzuki has set up a Rs 2,500-crore R&D centre in Rohtak, Haryana, which will be fully functional by early 2017. Spread across 600 acres - thrice the size of its mother factory at Gurgaon - and dubbed as the best of its kind in India, it has facilities for testing, evaluating of vehicle designs, crash-tests, and 34 different tracks on a 5.9-km long high-speed testing circuit. Nor is it the only one. Many of the major players in the two- and four-wheeler industry are focusing heavily on R&D - Hero MotoCorp, Bajaj Auto, Tata Motors, Mahindra and Mahindra (M&M), Ashok Leyland and more.

Hero, for instance, has also set up an R&D centre, with an investment of Rs 850 crore and a 16-km long testing track, which it calls the Centre of Innovation and Technology (CIT), at Kukas in Rajasthan. It houses every aspect of two-wheeler R&D, including facilities for creating new product designs, prototype manufacturing, testing and validation. The tracks are spread over 100 acres and include 45 different road surfaces "The CIT is the realisation of our vision to position our company as a leading source of innovation and green technology," says Pawan Munjal, Chairman and Managing Director & CEO, Hero MotoCorp. "We now have the ideal combination of world class infrastructure and talent to innovate in India, not just for the country but for the world." Hero is already the world's largest two-wheeler company.

For many years, most of the joint ventures in the auto sector involved transfer of technology from the global partner to the Indian one. While some of these marriages were extremely successful - Maruti and Suzuki's in particular - others were not. M&M, for instance, has in the past teamed up with Renault, American Navistar and Ford at different times for its technology needs. It even bought the Italian auto design company Engines Engineering in 2008, to augment its styling strength, but none of these efforts brought the results it wanted. Engines Engineering was eventually sold back to its original promoter in 2012. A few years ago it decided to develop vehicles independently. "We've incorporated world class development systems, which have allowed us to raise the bar for our products," says Rajan Wadhera, President & Chief Executive - Truck & Power Train, & Head - Mahindra Research Valley, M&M. "We set up our own technical centre, the Mahindra North America Technical Centre, in Detroit in 2014 to shorten our learning curve." The company also takes a project cost management (PCM) approach, informing vendors of forthcoming changes well in advance. "To define the work flow, built around determining and meeting our cost targets, we design and develop vehicle systems early in the product development cycle," he adds. "We co-develop designs that meet our cost targets, along with our vendors, rather than wait for our engineers to create the designs and then tinker with them in a bid to minimise costs."

Or take Tata Motors, India's largest vehicle manufacturer by revenue, market leader in buses and trucks. It also has its own technical centre overseas - in Coventry, UK, close to the headquarters of JLR, which it acquired in 2008. In 2014/15, it allocated 5.1 per cent of its revenue - the highest in the sector - to R&D, with the division entrusted to Tim Leverton, President and Head, Advanced and Product Engineering, Tata Motors. He is a global industry veteran with over two decades of experience with BMW, JCB and Rolls-Royce. His mandate is to raise the company's technical expertise in engineering, chassis, transmission and other critical areas to the highest international standards. "We have developed some breakthrough products such as the Tata Prima World and the Tata Ultra trucks where we have raised the quality bar," he says.

If Tata Motors has Leverton, Hero has engaged Markus Braunsperger, formerly with BMW as its chief technology officer and head of its Kukas R&D centre. Alongside Braunsperger, a host of engineers from Austria, Germany, France and Japan has also joined its team. The same goes for M&M. "We've recruited experts from across the globe, especially from the US, to fill gaps we found in areas such as studio design engineering and advance engineering," says Wadhera. Indeed, M&M has perhaps the longest tradition of bringing in talent from abroad, having recruited Pawan Goenka from General Motors way back in 1993. 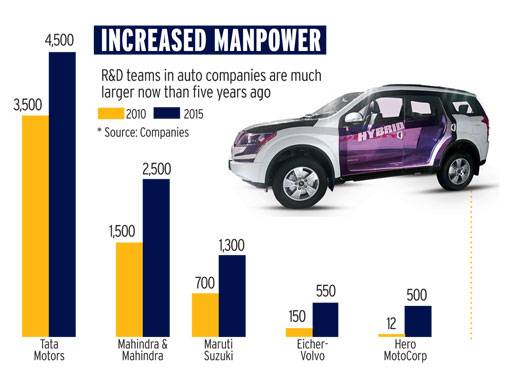 The R&D drive is broadly in three main areas - fundamental engineering research, conceiving and designing of new models, and modifications for the local market along with final testing. In any case, the days of Indian engineers playing second fiddle to their Western or far Eastern counterparts are over. Today, in contrast, the indigenously designed Bajaj Auto's Boxer, for instance, is the highest selling bike in markets such as Uganda, Nigeria, Angola and Kenya.

India's auto market is now the fifth-largest in the world - after China, the US, Japan and Germany - displacing Brazil from this position in 2015. (In two-wheelers, three-wheelers and buses, it is the largest.) But in regulations and pricing, it is still five to eight years behind the developed markets - regulations are less strict, while prices are more competitive. "India does have a lag of a few years compared to mature markets, which are also reflected in the pricing of vehicles," adds Tata's Leverton. "But we have successfully managed the deviations in terms of safety and emission regulations for the Indian market." "Apart from improving technology, the auto sector has a host of durability, reliability and safety issues to cope with as well"

The sheer size of the market has prompted global carmakers as well to take the same route - design products specifically for India, instead of replicating models they already have elsewhere, as they used to do before. Skoda Auto, Volkswagen AG's Czech subsidiary, for instance, has tied up with Mahindra Tech to tweak its Rapid sedan for Indian conditions. Nissan, Japan's second-largest automaker after Toyota, has roped in Chennai-based Hinduja Tech - formerly called Defiance Technologies - to develop a new compact car for the Indian market. Nissan has had little luck in India so far, with its Micra failing to cause any ripples. It has also set up an R&D centre in India, as have other global majors such as Hyundai, Mercedes-Benz, Chrysler, BMW, General Motors, Honda and Volvo over the past decade, all in a bid to adapt faster to the Indian market.

Almost as a corollary, Indian carmakers are also either acquiring or tying up with global technology providers, not for help with their Indian offerings as before, but to make a dent in global markets. Hero MotoCorp, for instance, has forged two alliances in recent years - with AVL, Austria, the world's largest privately owned developer of internal combustion engines and with Engines Engineering, the same company M&M acquired and then relinquished. It has also acquired Eric Buell Racing, based in Wisconsin, US, to pursue its superbike aspirations. The collaborations led to the launch of the highly sophisticated Maestro Edge and Duet during last year's festival season.

But the road to technological eminence may not always be smooth. Nor might it be immediately reflected in improved sales figures. "Apart from improving technology, the auto sector has a host of durability, reliability and safety issues to cope with as well," says Tata Motors' Leverton. "There are also 'fit and finish' issues, too, on which we have worked really hard. So far, that is not reflected in the sales - in striking contrast to its strong position in buses and trucks, Tata Motors passenger car sales have fallen from 352,000 units in 2010/11 to 126,000 units in 2015/16. In particular, the Nano, despite the global stir it created due to its unprecedentedly low price point, never picked up.

"We are still many years behind our Japanese counterparts," says Kenichi of Maruti. "It will be some time before Indian engineers develop the skills to work without any guidance from overseas. New-generation vehicles are very complex, with high electronics, sensors, telematics and embedded systems, apart from having to meet stringent safety standards." Even Maruti Suzuki has had its setbacks, such as the hatchback Celerio launched in 2015, which has so far failed to evoke customer interest.

Apart from long-term gains, improved R&D helps auto companies save on royalty payments to the overseas partner or overseas parent. Maruti paid SMC Rs 2,767 crore in 2015/16, of which a substantial amount is expected to be saved once the Rohtak centre gets going. Hero's investment in its Kukas CIT so far, Rs 850 crore, is about equal to the royalty it was paying Honda annually before the two parted company in 2010. It estimates it will save almost half this amount annually with higher amortization expected across its future products.