Batting for the Minnows

Sponsorships of lesser-known teams in the ICC World Cup are going for a song, and Indian companies are cashing in.

Almost three weeks before the ICC World Cup kicked off in Dhaka on February 18, Future Group announced it had won the merchandising rights for the tournament. The announcement had two eyebrow-raising aspects. One: India's largest retailing group would rather sell ICC-branded merchandise like caps and T-shirts through its value retail chain, Big Bazaar, instead of its own apparel-focused format, Pantaloon. Two: Future said it hoped to sell over a million pieces of merchandise during the World Cup - a figure unheard of in the Indian sports merchandising business.

A week into the tournament, Future Group seems to have got its numbers right. "The response to our World Cup fan merchandise has been overwhelming," says Sanjeev Agarwal, Joint CEO, Big Bazaar. "We have already sold about 45 to 50 per cent of our inventory since the launch across 146 Big Bazaar stores. We expect another spike in demand with the competition entering the next round." He adds that the Sach brand of personal care products - everything from toothpaste to soaps branded after Sachin Tendulkar - is doing well since the cricket season began. 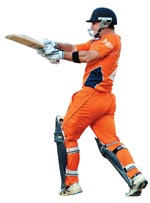 Netherlands cricketer Ryan ten Doeschate plays a shot against England in Nagpur on February 22
Future Group is not the only company to hitch its sales onto the cricket bandwagon. Sony India has unleashed a Rs 100-crore campaign, featuring India captain Mahendra Singh Dhoni. This is Sony's single biggest marketing campaign since it began operations in India in 1994, and seeks to boost the sales of Bravia, its high-definition TV brand in the flat panel TV segment. Sony hopes that the tournament which will be broadcast on high definition, or HD, for the first time, will help it sell 2,50,000 units in the World Cup-IPL season.

As branding consultant Harish Bijoor puts it, "Cricket is the lowest common denominator activity for a marketing outreach in India." The numbers back Bijoor's assertion. According to data from TV ratings agency, TAM Media Research, the inaugural match between India and Bangladesh was watched by 27.4 million viewers in the six metros.

TAM data also reveals that the average ratings of the inaugural match across the metros was 11 per cent higher than the opening match of IPL Season 3. Viewership ratings, however, cannot explain the bizarre hat-trick of sorts that happened off the field last fortnight. First, dairy giant Amul signed up the Netherlands team for a year. A couple of days later, Bangalore-based Karuturi Global, the world's largest exporter of cut roses, inked a similar deal with Kenya. Base Corp, a little-known maker of inverters from Bangalore, followed suit and signed up the Canadian team.

At first glance, these investments do not make sense. Why would Indian companies want to pay good money for their logos to appear on the jerseys and caps of minnows like Canada, Kenya and the Netherlands, especially when the first two do not play India in the first round? The answer is these companies are playing a 'percentage shot', to put it in cricketing parlance. In May 2010, the Board of Control for Cricket in India, or BCCI, announced that the Sahara Group had won the team sponsorship rights for Team India till 2013. Sahara had nosed ahead of Bharti Airtel by placing a winning bid of Rs 3.34 crore for every match the team played.

On the other hand, Amul paid a total of just around Rs 1 crore to acquire the sponsorship of the Netherlands team. "We have been looking at being associated with the World Cup for sometime now," says R.S. Sodhi, Managing Director, Gujarat Cooperative Milk Marketing Federation, the cooperative body that owns Amul. "We are targeting the younger segment and found that sponsoring a team is cheaper than buying a TV ad spot." In the past, Amul has historically invested less than one per cent of its turnover in ad spends.

R.S. Sodhi, Managing Director, Gujarat Cooperative Milk Marketing Federation
Currently, 10 seconds ad spots on ESPN Star are going at Rs 3.5 to 4 lakh. The rates are likely to go up significantly if India makes it to the knockout stages. Besides, a team sponsorship, even that of a lesser-known team, ensures better visibility compared to that obtained in the heavily cluttered TV ad space, says Bijoor.

Another reason why these companies are signing on international teams is the global nature of some of their businesses. Karuturi Global could not care less about the viewership of Kenya's matches in India. "We have over $100 million invested in Kenya. It is the jewel in the crown of Karuturi Global," says Ramakrishna Karuturi, founder and MD. "The deal is more of a brand-building exercise in Kenya. We are looking at a 10-year association with the team," he adds.

Amul is thinking of reaching out to an international audience with its deal. "The brand is going global. It is already being sold in the US. This association will further boost its image," says Shashi Sinha, CEO, Lodestar UM, which brought Amul and Team Netherlands together. Then, there are the 100-odd free tickets that come along with sponsorships - companies can distribute them as freebies to keep their distributors and suppliers happy.

Finally, there can always be surprises in the game. The Netherlands stretched England to the last over in a tight finish - a match that the latter was expected to win sleepwalking. An upset by Kenya, the Netherlands or Canada would have its share of cheering in India too. After all, their Indian sponsors are watching.

What RIL gains from BP deal