Rahul Sharma's heart swelled with pride each time he looked at his acquisition: a shiny Bentley Supersports bought in February last year. Only a select few have this Rs 2.25 crore plus model in their garage. On weekend drives, Sharma's bright orange car, which goes from zero to hundred in four seconds, would leave an onlooker feeling he had seen a flame fly by. The Bentley, and its aura, epitomised Sharma's career with Micromax, which he co-founded with three others and whose India operations he heads as Executive Director.

The Gurgaon-based company, with operations in 12 countries, was like a ball of fire on the telecom landscape. Its handsets offered immense value at low prices and battery life of up to a month. With the ability to take two SIM cards, they captured the imagination of millions of users who wanted more for less and the flexibility to move between connections. Sales surged, giving Micromax a market share of 7.6 per cent in 2010, when total handset sales touched 167 million. 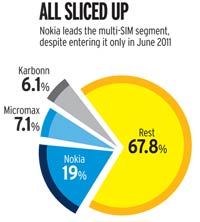 Click here to Enlarge
But 12 months is a long time in the fast lane. That market share has fallen by nearly half. It is no coincidence that the plunge has become pronounced since June last year, when Nokia flooded the market with its first dual-SIM phones. Of the 180 million handsets sold last year, more than half were multi-SIMS. And Nokia's share of the market outdid the Bentley, going from zero to 19 per cent in seven months flat. The Bentley still moves like a dream, but it would provide an analogy for its owner's company only when restricted to the slow lane.

That lane is getting increasingly congested, filled as it is with the 150 or so companies that mushroomed in the wake of the early success of Micromax and its brethren: Karbonn, Lava, Spice and Maxx. Following the simplest of strategies - get the phones from Chinese vendors, put your stamp, sell cheap and hog television advertising - the Indian handset brands had carved a fourth of the market for themselves. This was a sharp contrast from the earlier days, when Nokia dominated with more than 50 per cent and the rest was shared by Samsung, LG, Sony Ericsson, and other brands.

For some time, the going was good. Actually, great. But the decline began when customers began to experience problems. For instance, when Kaustubh Nandan Sinha, a Supreme Court lawyer, wanted a mobile phone with a BlackBerry-like qwerty keypad, the Micromax Q5, priced at just Rs 3,500, looked irresistible. Soon, it turned out to be regrettable. "The first two months gave me the feel of a BlackBerry. Then, the track ball started giving problems," he recalls. Then, other keys stopped working.

Worse, there was no Micromax service centre in the vicinity. Finally, Sinha decided to grit his teeth and pay through his nose for the real thing. "It has been more than six months and I have not had any problem," he says.

Sushmit Das, a property dealer in South Delhi, is unhappy with his Spice smartphone. The voice quality, he says, is not the best and the phone frequently switches off. "I will buy a Nokia touch-and-type," says Das. "I have had enough of these local handsets." Like Sinha and Das, many others who bought Indian brands have turned against them.

GETTING WITH IT
Things really started to go wrong for the local brands when the giants awoke from their slumber. Nokia jumped on the dual-SIM bandwagon in June 2011, launching seven models. It took the wind out of the Indian companies' sails by selling them for as little as Rs 1,800. In no time, the Finnish company became a market leader in the category. Today, the dual-SIM handset has become a commodity and margins are as low as two to three per cent. Pure trading (in handsets) will get tougher because of rising foreign exchange margins: Dilip Modi
On February 14, Samsung joined the dual-SIM fray, unveiling a number of models. The Korean company has also been busy launching smartphones, many of which come cheap. "We have 13-14 smartphone models, with price points ranging between Rs 6,600 and Rs 32,890," says Ranjit Yadav, Samsung India's country head for Mobile and IT.

With the MNCS offering competitively-priced alternatives, and the Indian handsets reporting all kinds of problems, the pendulum swung back. Compounding the Indian brands' woes, the depreciation of the rupee has made it costlier for them to buy phones from Chinese vendors.

It has also forced them to increase prices, sparing only Micromax and Spice, which have begun to manufacture in India. "Pure trading (in handsets) will get tougher because of the rising foreign exchange margins," says Dilip Modi, Managing Director of Spice. Margins on imported handsets were healthy until a year ago; a phone that sold for Rs 2,000 enjoyed a margin of 10 to 15 per cent.

Another factor that has led to the decline of the Indian players is their limited retail and service network. Most operate only in select cities and their sales are limited. None of them can match Nokia's 200,000 touch points, which also collect problematic handsets. "None of them has good after-sales service," confirms a mobile phone dealer in Lajpat Nagar, New Delhi. "After all, these are Chinese products." The dealer sells five to six of these brands.

New battlefield
The setbacks have forced the Indian companies to introspect. Lava plans to follow the example of Micromax and Spice and start manufacturing in the country, as this gives an immediate boost to margins by negating the impact of the rising rupee.

Some have bought into the idea smartphones are the future. "When we entered the market, the leaders did not understand the market for long-battery, high-decibel and dual-SIM phones," says S.N. Rai, Managing Director of Lava Mobile. He hopes to do something similar with smartphones.

Nokia commanded 38.4 per cent of this market in India between January and November 2011, Samsung had 27.5 per cent and Research In Motion's BlackBerry, 15.5 per cent. Modi agrees. Apart from Spice, he also owns Hotspot, India's largest multi-brand retail chain for mobile phones, with 1,500 stores. "Most people in our stores buy smartphones," he says. In the past few months Spice has launched a few Android-based smartphones, one of them priced at Rs 7,500. The cheapest smartphone from Nokia is priced at Rs 5,000. Modi goes to the extent of saying that his phone has more features than a similar piece from the MNC stable at that price point. "We keep the cost in control and work on lower margins," he says.

Analysts doubt that the shift in focus to smartphones would help the domestic brands regain lost ground. "It will be difficult for them to compete with global brands with higher price tags," says one whose firm tracks the mobile handset industry. "It will be difficult for even the best Indian brands to sell phones priced as high as Rs 7,000 or Rs 8,000." Consumers at the upper end would not even glance at the local brands.

Adding to the problem is the huge research and development cost associated with developing better smartphones. In order to be competitive, the domestic brands will need to partner with Google and Microsoft, which make the operating systems that mobile phones run on. Nokia showed the way by partnering with Microsoft to develop its Lumia series.

Over time, customers will want more features, better performance and efficient after-sales support. Unless the Indian companies provide these, they will perish in the cutthroat arena that is India's mobile handset market.

Fortune in the woods

The battle against corporate fraud