The go-go years of growth might be well behind the Indian IT sector, but it still had plenty of steam left. 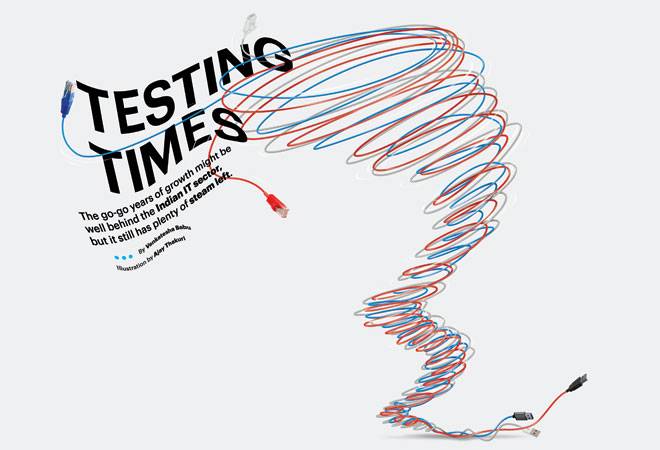 $116 billion worth of software and services exported by India in FY2016/17; doubling over the last six years (Illustration By Ajay Thakuri)

Rajesh Gopinathan, Chief Executive Officer and Managing Director of Tata Consultancy Services (TCS) - India's largest software services exporter - is extremely cautious when talking about future outlook. Therefore, it was a milestone moment when he emphasised, during an analysts' call in January, how TCS had signed its first $50 million-plus digital transformation deal. "While a deal of this scale is still relatively rare, confined to only the most technologically progressive customers, we believe this is the shape of things to come as more and more organisations start implementing a long-term digital strategy," he added.

The deal came on the back of its previous success - TCS won nearly $6 billion in contracts under a month - underscoring the company's and the industry's remarkable resilience and the ability to adapt to change.

Until recently, the $154 billion information technology (IT) industry was the showpiece of the Indian economy. As per the estimates of Electronics and Computer Software Export Promotion Council, India exported $111 billion of software and services in FY2016/17 compared to a mere $4.9 billion in 1999/2000. The sector supports about four million jobs, mostly whitecollar ones, leading to post-reform prosperity and ushering in a new breed of billionaires. So, what happens to the industry is crucial as it accounts for 8 per cent of the country's GDP and 19 per cent of its exports, according to National Association of Software and Services Companies, or Nasscom, the IT sector lobby group.

The landscape has changed over the past couple of years. After clocking high, doubledigit export revenue growth rates for nearly two decades, the sector is facing new challenges as tech spends are dwindling globally and requirements are changing drastically. Big clients are seeking newer digital offerings and competent cloud-based models instead of low-cost outsourcing solutions that had triggered India's growth. While companies struggle to cope with the new normal, Nasscom has projected 7-9 per cent growth in IT exports (in constant currency) in 2018/19, which means the sector is likely to witness single-digit growth for the third year in IT Special > Lead Essay a row. In 2017/18, the growth is expected to be 7.8 per cent in constant currency.

It has been a rough ride for the IT industry, buffeted by tectonic changes in the global marketplace, but experts are banking on its coping capability. B.V.R. Mohan Reddy, a former Chairman of Nasscom and now Executive Chairman of Cyient, an IT solutions provider for engineering and manufacturing industries, does not think there is any fundamental threat to the sector. "I have heard these concerns before. When Indian IT first made a global mark by providing Y2K solutions, everybody said it was a one-off. Similarly, they dismissed us after the dotcom bust in 2001-02. Indian IT's raison d'tre was questioned after the economic meltdown in 2008. But on each occasion, we have proved our critics wrong. Of course, changes are happening but I do not doubt the strength, adaptability and resilience of the Indian IT sector."

For nearly two decades, Indian IT's main calling card has been the cost advantage. The concept of 'lift and shift' - moving IT processes to a lower-cost destination (like India) - and getting the projects delivered at a fraction of the cost meant a win-win for all. Be it system integration or package implementation, think of all the SAP and Oracle rollouts for every key division such as finance, HR and marketing and sales, and how the top vendors exploited those opportunities to boost their revenues. Next came remote infrastructure management that enabled Indian IT services companies to capture quite a big chunk of the market. Realising the advantages of being in a low-cost destination like India, multinational IT giants like IBM, Accenture, Capgemini and others also ramped up their workforce here.

However, with technology evolving fast, mere cost-cutting is no longer a priority. Companies today are looking for partners who will help them grow their businesses, and it calls for a change in India's traditional IT prowess. Also, the rise of SMAC (social, mobile, analytics and cloud) stack means a never-before technology convergence that is fast becoming the backbone of the new enterprise IT model. Indian IT firms can no longer throw warm bodies at scale to derive advantage.

Introduction of robotic process automation (RPA) and deployment of artificial intelligence (AI) also mean the workload of a 200-strong team will now require only a tenth of the people power. Phil Fersht, CEO of HfS Research, a US-based research and advisory firm, says RPA has gone mainstream, and AI is increasingly deployed to speed up proceedings. Therefore, most of the low-end, repetitive coding work, which still accounts for an overwhelming share of IT revenues, is getting automated.

To remain relevant, Indian companies have to address a major pain point, that of reskilling thousands of their workers, which will lead to a substantial fall in revenue per person. As the cost advantage declines and profit margins are squeezed, IT firms have responded by limiting wages, reducing headcount and cutting fresh intake. In the last quarter (October-December, 2017), IT majors TCS, Infosys and Tech Mahindra saw their net employee number go down compared to the previous quarter. Overall, the industry is likely to onboard more people, but the net addition could be significantly lower this year compared to the past couple of years when nearly two lakh people were added per annum.

R. Chandrasekhar, the outgoing President of Nasscom (he will demit his post in March 2018 after a five-year stint), also points to a new wave of non-tariff barriers and protectionism, including visa restrictions and insistence on stringent near-shore delivery systems. "Whether it is visa restrictions in the US or the impact of Brexit, the companies have to face the challenges. But I am confident they will be able to overcome them," he adds.

Another crucial factor is the sector's overdependence on specific markets, a small base to be precise, which is gradually improving. For instance, the US accounted for 80 per cent of the market share in 2000, but today it is around 60 per cent and that too, on a base which has grown by a factor of 20). Indian IT is yet to make big strides in markets like Japan, the world's second-largest IT services market, and China, which is growing at a fast clip. With its commoditised traditional business under severe margin pressure and digital still producing only a small chunk of the revenues, the Indian IT industry needs to reinvent quickly. Nasscom estimates that nearly 1.5 million people need to be retrained. The tailwind, however, is a global economy that has come back to the growth path. Rostow Ravanan, CEO of MindTree thinks it is a race between ramping up growth in digital to more than offset the decline in traditional business. Given the past track record of successful reinvention, few would bet against the ingenuity of the sector to pull it off successfully. For now, companies, employees, investors and all other stakeholders are cautiously optimistic that Indian IT can do it. Again.