The sheer amount of manufacturing activity taking place in small towns of India is mindboggling. Shops are being set up at breakneck speed and there is massive expansion. Where are these clusters located, and can they really deliver on their promise? Here is what Business Today discovered.

A survey by global consulting major, Capgemini, late last year suggested that India could challenge China and emerge as the next big manufacturing destination over the next three-to-five years. On the surface, that sounds like a fantastic claim. But as BT crisscrossed manufacturing hubs across the country, we found the sheer amount of activity taking place in these towns mind-boggling. From smaller towns like Aurangabad, a traditional manufacturing hub, to newer locations like Paradeep, manufacturers are setting up shop and expanding at a breakneck speed. So, what makes these towns good locations for manufacturing? At a broad level, these include the availability of land and cheap labour, a healthy industrial relations atmosphere, physical infrastructure (roads, airports) and proximity to markets. Then, state governments are providing fiscal incentives to build on the many natural advantages these clusters enjoy. Here’s what BT discovered… 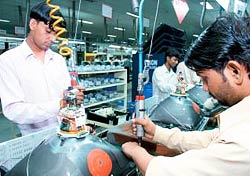 However, consumer electronics majors are investing heavily in the city.” So, what makes Greater Noida tick? Says Ajay Sapra, General Manager (Corporate Export-Import), LG Electronics India: “Its proximity to Delhi, smooth road connectivity, continuous water supply and easy access to three important markets (northern, eastern and central) makes Greater Noida attractive to many large companies.” However, the non-availability of skilled labour has started taking a toll on the companies, which have to rely on a migrant labour force. Real estate prices are also a cause of concern as the influx of industries has pushed up demand for real estate, making it expensive for industries to expand. HMSI’s Manesar plant
Manesar is fast emerging as a major hub for the automobile and auto components industry. Last year, Maruti Suzuki kicked off its second factory at Manesar, which is expected to become fully operational in June. This, and the presence of Honda Motorcycle & Scooter India (HMSI), is prompting many auto components manufacturers to set up factories there. Manesar has all the ingredients—good infrastructural facilities and proximity to the national capital—needed to emerge as a big manufacturing hub. The Haryana government has focussed on building local infrastructure, and also gives incentives like tax holidays, and a 10 per cent refund of land cost on timely completion of projects, among others. The state is now planning to set up more ITIs in order to meet the rising demand for skilled manpower. Says Naresh Kumar Rattan, Head (Sales & Marketing), HMSI: “The Haryana government has focussed on developing Manesar’s infrastructure. That’s why companies like Honda, Maruti and Denso have come in.” Power and water shortages, however, are major concerns and some companies are setting up captive power plants or using diesel generators to bridge the gap. But given the advantages, companies seem to have taken these shortcomings in their stride. 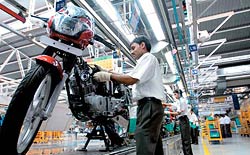 Bajaj’s factory in Pune
Over the last month, Mahindra & Mahindra and Tata Motors have announced investments of over Rs 10,000 crore in this belt. Volkswagen has announced plans to raise the proposed investment on its plant here from Rs 2,500 crore to Rs 3,500 crore. With the government pulling out all stops to promote the area as an auto hub, official clearances are a breeze. Government officials expect over 1.5 million cars and trucks to roll out of the region over the next three years—that’s double the current capacity. The big hitch: real estate prices are going through the roof. Then, the rapid influx of industries has led to infrastructure constraints.

“The pace of infrastructure growth is one area of worry,” says Pawan Goenka, President (Automotive), M&M. But that doesn’t seem to be deterring prospective investors. According to government estimates, Rs 40,000 crore worth of investments have flowed into the region over the past decade or so. Skoda is said to be contemplating shifting the manufacturing facilities for its Fabia car to Chakan from its Aurangabad facility. The Bajaj small car is also likely to roll out of its greenfield facility in Chakan. 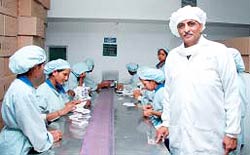 Atra Pharma’s MD Anil Save (right)
Companies began setting up factories in Aurangabad back in the 1960S, when the gOvernment of Maharashtra started offering incentives to Mumbai-based companies to shift out of the metropolis. The setting up of Bajaj Auto’s plant in 1984-85 saw the city emerge as an automotive hub.

What makes the city a good location for manufacturing? Locational advantage apart—it is less than an hour away from Mumbai by air—it is the presence of a disciplined labour force that fuels industry here. “We have not had a single labour agitation over the last 15 years that has hurt industry badly,” says Mukund Bhogale, MD, Nirlep Appliances.

The dry weather and the availability of good quality water make it attractive for the pharmaceutical and beer industries. “The weather makes it ideal for the pharmaceutical industry. Also, it is well-connected to pharma hubs like Hyderabad, Mumbai and Ahmedabad,” says Anil Save, MD, Atra Pharma, which contract manufactures Calcium Sandoz and Neurobian for MNC clients.

Companies like SAB Miller, United Breweries, Heineken, Carlsberg have all set up breweries here. But challenges remain. The foremost among them are chronic power shortages and the absence of a multi-lane highway connecting the city to Mumbai, though one is being constructed. Once this is ready, the attractiveness of the city is expected to grow. 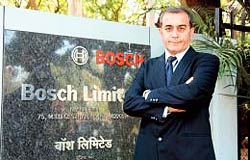 Bosch India’s VP (Commercial) Subbu M. Hegde
Mention Nashik, and the first thing that comes to mind for many people is wine. The salubrious climate and the quality of grapes grown around the city have made it the cradle of India's nascent wine industry. But there's more to Nashik than wine. The city also plays host to several IT, auto and engineering manufacturing giants. ABB, Bosch India, M&M, L&T, Thyssen Krupp, CEAT and Siemens are just some of the big names that have facilities here. Bosch is the largest private sector employer in the city with over 3,000 employees. "What makes the city attractive is the availability of cheap labour, a large ecosystem of component suppliers and adequate supply of relatively cheap land," says Subbu M. Hegde, VP (Commercial), Bosch India. Nashik, however, does have its share of problems. The road connecting the city to Mumbai, 200 km away, is considered very accident prone. Then, "despite having two airstrips, Nashik still does not have an airport. That's quite an impediment," says Hegde. But most worrisome is the recent decline in labour relations, primarily due to the parochial political line adopted by MNS leader Raj Thackeray. "Several north Indians have left and the gap is proving tough to fill," says the head of plant in the city. But despite these blips, industry believes that Nashik has a bright future as an industrial hub. 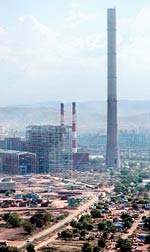 Jindal’s steel plant in Bellary
Very few people are aware of this, but there is a Hospet angle to this year’s Beijing Olympics. Many of the mammoth structures that have come up in Beijing over the last few years in connection with the games, have been built with steel made from iron ore mined in Bellary, the district where Hospet is located. The Bellary-Hospet-Koppal belt is home to JSW Steel, Kalyani Steels, Kirloskar Ferrous Industries, BMM Ispat, Bellary Steel & Alloys and Karnataka Strips, among others. The largest of them, the Rs 12,628 crore Sajjan Jindal-controlled JSW Steel, currently produces 4 million tonnes per annum (TPA) of steel, and, following the completion of an ongoing expansion programme, this is expected to rise to 7 million TPA by September. “Over the next two years, its capacity will rise further to 10 million TPA and headcount will touch 50,000 from the current level of 30,000,” says JSW Steel Director (Commercial) Vinod Nowal. Abundant iron ore reserves and availability of skilled manpower are two great advantages that Hospet offers. Power is not an issue, and most companies have their own plants. Some, like Jindal’s plant, have surplus power, 50 per cent of which goes to the state grid; there is the 1,470 MW Raichur Thermal Power Station nearby, and Bellary is getting its own 1,000 MW plant. Industrial relations are also quite cordial in Karnataka as a whole. But the condition of the local road network leaves a lot to be desired. About 17,000-20,000 trucks transport iron ore to the New Mangalore Port Trust every day, and the roads need immediate overhaul. Water may also turn out to be an issue if linkages are not worked out for future use.

But connectivity with the rest of the country is improving. Says V.P. Baligar, Principal Secretary (Industries and Infrastructure), government of Karnataka: “In two months, Hospet will be linked to Mumbai and Delhi by rail.” Hyundai’s Sriperumbudur plant
It was Hyundai Motor India’s decision, in 1996, to set up its plant in this sleepy hamlet that turned the arc lights on Sriperumbudur. Hyundai was followed by 50 ancillaries, which turned the area into an auto manufacturing hub. The South Korean auto major has so far invested Rs 4,000 crore. In 2001, Saint-Gobain, the France-based glass manufacturer, followed with a Rs 535-crore unit, which was subsequently expanded by another Rs 800 crore. And in 2005, Nokia set up a cell phone manufacturing facility in its SEZ here. “Within three years, the SEZ (of 220 acres) is filled up,” says Sachin Saxena, Director, Nokia India. Then, a host of smaller companies have also set up base in this neck of the woods. All of them speak glowingly about the region’s “enabling bureaucracy”, which makes land acquisition and other procedures a breeze. M. Velmurugan, Director, Industry Guidance Bureau, Tamil Nadu, who administers the state’s single window clearance scheme, says: “We anticipate and facilitate matters for investors on the ground even before the discussion is over and we close the deal.’’ The nearest airport, at Meenambakkam, is 43 km away, but there is a proposal to build a new airport at Sriperumbudur itself. The nearest seaport is 50 km away in Chennai.

The availability of skilled manpower only adds to the attractiveness of this cluster. However, there are storm clouds forming in the horizon. “The CITU (the often militant trade union arm of the CPM) is raising its head,” warns Suhasini Frederick, the owner of Sriperumbudur Times, a local newspaper, adding that the Sriperumbudur-Oragadam region has about 400 manufacturing units. An export unit in Tirupur
Tirupur accounts for 56 per cent of Indian knitwear exports. The town is attractive as a cluster, thanks to the well organised ancillary network that helps exporters.

However, there are only a handful of units with revenues of more than Rs 100 crore, and this may prove to be its Achilles’ heel in an increasingly integrated world.