Steep airport charges in India are keeping air fares inordinately high at a time when airlines are fighting a downturn.

M.Thiagarajan, MD, Paramount Airways
Recently, the Malaysian low-cost airline Air Asia jolted the Kuala Lumpur International Airport authorities by declaring its intention to build an airport for its exclusive use in the city. The reason? To cut down on the sizeable airport charges it ends up paying. The Malaysian government shot down the proposal, but not before promising the Tony Fernandez-led airline a low-cost terminal at Kuala Lumpur airport. This is expected to save costs for the airline as it expands its operations to meet its targeted passenger volume of 60 million by 2013.

Indeed, major airports across the globe are slashing charges in an attempt to help embattled airlines cope with the downturn in 2009, which is expected to be annus horribilis for the aviation industry. In Singapore, the Civil Aviation Authority of Singapore has announced a slew of measures, including a 25 per cent rebate in landing fee at the Changi and Seletar airports. In China, its civil aviation administration has suspended for six months its 10 per cent surcharge on landing fee at the nation’s airports. Several other international airports have followed suit.

Back home in India, though, it’s a different story. Despite falling air traffic (in the October-December quarter it was lower by 18 per cent compared to a year ago) the Delhi International Airport (DIAL) has started collecting an Airport Development Fee (ADF) from March 1 this year, and the Mumbai International Airport (MIAL) will do so from April 1. These charges are being passed on to air passengers translating into higher fares. From March 1, 2009, international passengers flying out of Delhi airport are paying Rs 1,456 ($28) Airport Development Fee. The corresponding fee for departing domestic passengers is Rs 260 ($5).

This is on top of a recent 10 per cent increase in fees the airport charges airlines which is ultimately passed on to passengers. Airlines feel this will further impact passenger volumes. The blow will be particularly severe for low cost carriers (LCCs) whose users are extremely price-sensitive. Says M. Thiagarajan, MD of Paramount Airways: “The charges like passenger fee, development fee, infrastructure charges etc., are very high for low-cost carriers. On low-priced tickets, close to one-fourth of what they collect as fares go towards meeting these charges. It’s not so steep anywhere in the world.” He adds that the private airports want to charge for facilities like aerobridge and ladder etc., which were earlier free of cost at Airports Authority of India (AAI)-run airports. Says Richard Leigh, MD of www.airportcharges.com, a UK-based portal: “Indian airports are more expensive than their Asian counterparts, especially for international operations.” 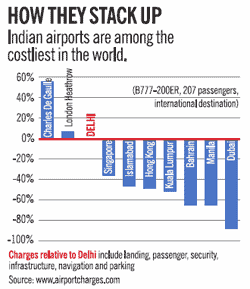 The International Air Transport Association (IATA), the industry body, argues that the ADF at Mumbai and Delhi airports are essentially charges to pre-finance airport development projects. “Pre-financing increases the costs of air travel when passengers are made to pay for facilities that are not yet in use,” says Albert Tjoeng, IATA spokesperson in Singapore. The ADF, he says, has come at a time when the industry is badly in need of stimulants, not costs that stifle recovery. Capt. G.R. Gopinath, Vice Chairman of Kingfisher Airlines, finds the whole government approach towards airports infrastructure flawed and anti-consumer. “The whole idea of privatising airports was to bring in accountability, efficiency and better quality of service at a competitive price. But what the government has effectively achieved is to replace the public sector monopoly over airports with a private sector monster.” He calls for more than one airport in big cities, which will foster competition among airports resulting in better quality of service and better pricing for all stakeholders.

Capt. G.R. Gopinath, Vice Chairman, Kingfisher Airlines
Gradually in India too, this concept of the user paying for the infrastructure (instead of the airlines) he uses will gain ground and acceptance”, says Hungerbuehler Eyebrows, though, are also being raised at the lack of transparency in levying development fees. The absence of an airport regulator, it’s felt, has aggravated the problem. “There is an estimated 20 per cent over-collection of air navigation charges and 33 per cent differential charges for international operations,” Tjoeng of IATA insists. The airlines now want the Airport Economic Regulatory Authority (AERA) to become operational soon. “AERA has an important role to play. There is no time to waste in quickly setting-up and staffing the agency,” says IATA Director General Giovanni Bisignani.

An independent regulator, hopefully, will be able to come to the aid of the aviation industry which has been battered by high costs of operations and dipping passenger volumes.
TweetYoutube