Room in the middle

In April this year, the Intercontinental Hotels Group, or IHG, the world's largest hotel group by number of rooms, signed a 20-year management contract with Duet India Hotels to launch 19 Holiday Inn Express hotels in India by 2016. Duet India Hotels, the hotel investment arm of global asset manager Duet Group, has set aside around $145 million (Rs 650 crore) for the project. IHG, which will run the hotels and formulate expansion plans, will put in $30 million for a 24 per cent stake in the venture. 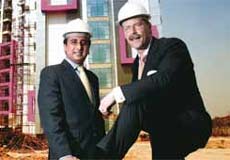 Rahul Chaudhary(left) Executive Director, with Kevin J. Beauvais, Co-Founder and CEO, Zinc InVision Hospitality
IHG's Holiday Inn Express Hotel chain is specifically tailored for the mid-market segment. It is one of the fastest-growing brands in the world, opening two hotels a week on average globally. Considering that seven of the 12 hotels IHG currently runs in India are in the luxury segment, the deal reflects the changed strategy of the brand.

"We haven't always made the right choices in India and our brands have suffered," says Chris Moloney, Chief Operating Officer, South West Asia, IHG. The first two hotels will come up in Ahmedabad and Goa next year. The hotel behemoth will open luxury hotels in India, too, but 75 per cent of its future projects in India are tailored for the mid-market. It has been ramping up infrastructure, opening sales offices and business support centres in Mumbai and Delhi to leverage facilities to build centralised services for its expanding mid-market chain.

Planning a holiday? Here's how you can have one within your budget

"Yet India is a greatly undersupplied market. Beijing has more hotels than all of India." The costs of building such hotels are also relatively modest, compared to the five-star ones. "The costs of acquiring land per room are low. We can build these hotels faster and more efficiently," Bali adds. India is our fastest-growing market after China, and we are looking at our plans as long term opportunities: Frits Van Paasschen, CEO, Starwood Hotels and Resorts Worldwide
IHG is not alone. A range of leading global hotel chains have planned massive investments in India's midmarket segment - or hotels with a room tariff of around $100 (Rs 4,500) per night in big Indian cities - in the next four years. Starwood Hotels and Resorts Worldwide, which owns brands like Le Meridien and Sheraton, intends to set up 100 hotels in India by 2015. It already has 32, most of them five- star brands like The Luxury Collection, Le Meridien and W, but its current thrust is overwhelmingly on its midmarket brands like Aloft or Four Points by Sheraton. "India is our fastest-growing market after China," says Frits Van Paasschen, President and CEO, Starwood Hotels.

"We see our plans as long-term opportunities over the next decade to grow our businesses here." Seven hotels were scheduled for launch this year of which five are mid-market: the two that have already begun functioning, in Visakhapatnam and Pune, are both in this category under the Four Points by Sheraton brand. So too are three of the remaining five, being built under the Aloft brand in Ahmedabad, Coimbatore and Chandigarh.

Accor, another top global hotel chain, which at present has nine hotels in India under the brands Mercure, Ibis and Novotel, plans to raise the number to 90 by 2015. Though some of its five-star brands will also make their debut in India this year, Accor is pushing hard its budget and mid-market brands, Ibis and Novotel: seven new Ibis hotels will open this year, 13 more Novotel hotels in the next three years. It has also set up an investment fund with global travel services firm Interglobe to further its India programme.

In a limited service proposition, consistency is key. No surprises: Chris Moloney, COO, South West Asia, IHG
While Zinc Holdings holds substantial shares in the Taj Safari properties in India, the joint entity is now venturing separately into the country as well, bringing - as expected - not its upscale brands like Soma and Zinc Journey, but its mid-market ones Zinc City and Glow Studios.

Zinc InVision is targeting places like Amritsar, Chandigarh and Haridwar, satellite towns like Noida and Mohali, information technology hubs and special economic zones. It projects revenues of $16 million by 2013. The first Glow Studio will open in Noida in August. "The luxury market is getting saturated," says Rahul Chaudhary, Executive Director, Zinc InVision. "We are very clear about the tariff bracket in which we want to be. It has to be $100 or even less in any market in India we go to."

Eschewing five-star indulgences and deluxe amenities, mid-market hotels - a notch above budget or economy hotels - offer clean, comfortable rooms equipped with TV and Internet, and breakfast included in the room tariff. The total current shortage of rooms has been estimated at 150,000 by the tourism ministry, according to the Deloitte report, most of it in the mid-market segment. Just 15 per cent of the existing hotel rooms in India fall in the mid-market segment, compared to 43 per cent in the United States and 35 per cent in Britain. "The room supply structure in India is like an inverted pyramid," says Patu Keswani, founder of the indigenous Lemon Tree brand of mid-market hotels. "There are more five-star rooms, though rising demand is in the mid scale sector."

Most Indian cities are acutely affected. Even the few exceptions like Pune, which is said to have excess room supply, will not remain so for long, feel industry watchers. "There is oversupply of rooms in Pune, but in the long term it will not be enough given the rising economic growth," says Sanjay Dutt, CEO, Business, Jones Lang La Salle, India, a real estate services firm.

"We're witnessing a 50 per cent growth in domestic travel. About 40 per cent of the bookings on our website are for mid-market hotels," says Anand Kandadai, Senior VP, Sales & Distribution, at online travel portal MakeMyTrip.com. "The sector, which had only a few recognisable brands like Lemon Tree till now, will get more organised with the entry of these international chains," says Dutt.

A report last year by HVS, a consulting and services organisation focused on the hospitality sector, also credits the sudden rush of international hotel chains into India to favourable government policies, as well as improved roads and airport infrastructure.

"The Reserve Bank of India's ruling, that loans for hotel construction will not be classified as commercial real estate, (and) the relaxation in external commercial borrowing norms have helped the sector," it notes.

It adds that the process of loan syndication by which banks work together to finance hotel projects while taking on just the level of exposure each bank wants to and no more, has also helped.

"This has made it easier for borrowers to obtain debt financing, and often at lower interest rates," it says.

Hoteliers acknowledge that pricing will be crucial to their success. They all intend to stay close to the golden mean of Rs 4,500 per night charge matching any rise in tariff with additional amenities like pools, lounges and bars.

"Brands like Lemon Tree started out with rates of Rs  3,000 to Rs 4,000, but the market drove up their rates so much that they now charge around Rs 7,000," says ZincInVision's Chaudhary. "Midmarket is not mid market anymore."

Keswani acknowledges the spike in rates in the metros, saying rising land and construction costs left him no choice. "In a limited service proposition, consistency is key. No surprises. Most domestic travellers are looking for accommodation that is contemporary, secure and clean," says Moloney of IHG.

"They don't want bellmen escorting them to their rooms. They don't want other fancy elements provided by luxury hotels. They just want to stay, get on with their business and move on."