A big dip in confidence is causing consumers to stay at home and spend less. They are severely affecting not just businesses but themselves too. 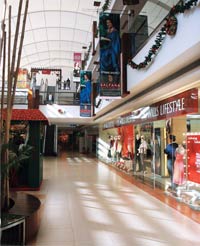 Consumer ennui: Where have the footfalls gone? Commercial establishments like shopping malls are desperately hoping for consumer stimulus to jolt back business
}An illiterate old man in Mumbai runs a brisk trade selling pakoras at a busy intersection. He never watches TV and cannot read, but is smart enough to push his sales with clever pricing options. As his profits increase, he branches out into other snacks, recruits support staff and even begins delivering to nearby homes. At some point of time, he manages to save enough money to open up a small shop.

One day, the old man’s welleducated son—thanks to his father’s hard work, he’s enrolled in a local management programme—asks his father, “Dad, aren’t you aware of this thing called the meltdown?” “No,” the father replies, “but tell me about it.” The son quickly runs through the recent chain of events: subprime fiasco, bank failures, global recession, slowdown in India, decline in exports, car sales and a whole host of other things that are too complicated for the old man to digest. But he gets the drift. Businesswise, things are getting bad. The father immediately cuts down on the variety of snacks and reduces staff. Fewer people stop by to eat. Sales drop rapidly. The father gradually looses enthusiasm for the business and closes shop.

Some of the details in this madeup story are perhaps improbable— who, for instance, doesn’t watch television in India?—but the basic premise gives a very coherent picture of the psychology of consumers and business owners today. Much like consumers who were caught in severe financial meltdowns such as the Great Depression of the 1930s in the US, or the Asian meltdown in the late ’90s—a serious crisis of confidence is now gripping Indian consumers who are spending less in the face of economic uncertainty. This is grim news for businesses that have had to contend with a steep drop in sales and are now forced to shut shops and fire employees. Problem is, when fewer goods are produced, less income is generated, further decreasing spending ability as well as consumer confidence, thereby worsening the situation in a deadly, never ending vortex. Click here to Enlarge
Following swiftly on the heels of the US, India is going through a crisis of consumption. Though the rate of consumption growth had almost tripled through the past few decades—from only 3 per cent a year in 1970-71 to 8.5 per cent in 2007-08—a deceleration in this growth is almost certain in the current year .

Naturally, this cutback in consumption is putting people on edge. “I am suffering from Recession Depression,” complains a top investment banker who says that he can’t remember the last time he closed a deal. “Forget cabs, five-star hotels and lavish office lunches, I’m carrying tiffin,” he complains. The slowdown has meant fewer trips to his hair salon and a resolute avoidance of end-of-the-season discount purchases. Clearly, this banker has lost his sense of job security and his appetite for shopping.

Click here to Enlarge
Other professionals across the spectrum seem to echo these woes. “I have been dithering for a while now on my much-delayed car change,” says Shariff Khan, an auto engineer-manager in Pune. For the last five years, head hunters badgered Khan with offers, which he gave little time or attention to. Then came the slowdown, and in early February, Khan decided to spruce up his resume, the first time in a decade. He also activated his dormant IIM Ahmedabad and IIT Delhi alumni networks. “You never know,” says Khan. This sudden loss of job security seems to be sweeping the corporate landscape in India. “Unless you’re sure you won’t lose your job over the next 3-4 quarters, you’re not going to buy a new house or car,” says Siddhartha Roy, Chief Economist, Tata Group. Psychologist and author Judith M. Bardwick calls this a psychological recession, “an emotional state in which people feel extremely vulnerable and afraid for their future.”

So, how exactly are people saving to get them through these bleak times? The BT Demand Survey shows that out-of-town travel and outside-of-home food is what people are cutting back the most on. An increasing number of puband-bar goers have downtraded to cafes. Spending on clothes, footwear and celebrations have shrunk, too. Footfalls—which is not the same as buyers—for Shoppers Stop during April-September 2008 were up just 1 per cent. Thirty-year-old Parul Ahluwalia, a private bank executive, is restricting her wedding celebrations to two days instead of three. One of the ceremonies is now to be held at a temple. “Though I may be able to keep my job, there surely won’t be a bonus,” says Ahluwalia.

This hesitation to spend is causing serious pain for businesses. A BT-CII producers’ survey shows just how bad the news is. Demand has shrunk for 90 cent of the respondents in the survey. Nearly 70 per cent rated lack of consumer confidence as the biggest economic problem today—several notches above credit unavailability. “Less than half the inquiries are converting into sales,” rues Rajiv Mitra, official spokesperson for the second-largest car maker Hyundai, although he says that the company has fared better than its peers. Sales are down at all price points for the car maker. “The big real estate developers used to be big buyers but we aren’t seeing them any more,” says Manishi Sanwal, GM, Louis Vuitton Moët Hennessy Watch & Jewellery India. The luxury product maker isn’t too alarmed yet, but admits that the small and medium entrepreneurs aren’t flocking to its outlets any more. 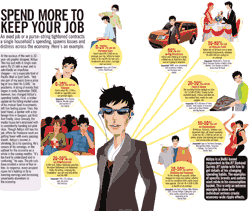 Click here to Enlarge
Consequently, companies are making some painful decisions. Ramesh Srinivasan, Executive Director, KPMG, says that companies are cancelling new product launches and cutting back on expansion plans. Retail chains, for instance, are shutting down stores. “It’s no longer wait-and-watch, but cancel,” he says. “An economy that was expanding at 10 per cent growth now has to adjust to 5 per cent growth,” says Subir Gokarn, Chief Economist, S&P, India. Latest available data on capital expenditures from the CMIE indicate that for June-September ’08, as many as 45 investment projects worth Rs 42,700 crore were abandoned or shelved, 20 more than the same period last year.

Cutbacks in production and consumption mean that offices have become stingier. The handset allowance for all of B.K Modi Group’s mid-level officers is down from Rs 10,000 a year to Rs 3,000. “Foreign magazines were disconbt tinued about the same time toilet paper was withdrawn and the joke was that the office didn’t want them misused,” says Ramanathan Bhat, a mid-level employee at a Bangalorebased CA firm. An unforeseen consequence of all of this is a rise in office politics; bosses are getting bossier. “Would you believe, I bumped into my arch rival at the shrink’s last weekend,” says a senior manager of an export house. Turns out, acute insecurity and sleep loss are the common diagnoses for both since only one will keep his job.

So, who looks like they’re doing okay? Rural and semiurban India seem to be immune to the “won’t-spend” virus. Sales of electronics, especially colour TV sets and soaps and shampoos, continue to remain healthy. “Newer markets beyond the top 35 cities are booming for us,” says Ruchika Batra, official spokesperson for Samsung Electronics.

The urban poor, however, are just as vulnerable as the upwardly mobile classes. 23-year-old Ravi Yadav, a flower-garland seller in Old Delhi, took home unsold flowers every single day in January. Gulabi, a 28-year-old sex worker in Mumbai’s red-light area of Kamtipura, where hourly rates go up to Rs 3,000 says: “The amount of work has doubled but rates have halved.”

Ultimately, this dangerous whirlpool effect of a consumption drop leading to a supply slide—and therefore more layoffs and more economic pain—can become a crippling, vicious spin cycle. This is where the government’s stimulus package can become vital bridges between short-term economic uncertainties and longer-term prosperity (For more on ‘bridges’, see page 26). Still, stimulus packages can only do so much. For a quick recovery, consumers need to put aside apocalyptic visions of the future, and go out and do what they’ve been best at so far—spend money.