On a May morning in Tokyo, the cups of steaming green tea on the table remain untouched as Nippon Life Insurance Company's Executive Vice President Takeshi Furuichi explains why the room is so hot. It is because of Cool-Biz, he says. The programme to reduce energy consumption, begun by the Japanese government in 2005, took on a more urgent edge after the nuclear meltdown that followed the 2011 earthquake. One of the measures in the campaign is to set office air conditioners no lower than a balmy 28 degrees Celsius. Nippon Life's headquarters in Tokyo's Marunouchi commercial district is no exception. Furuichi says he is wearing a suit today only to receive visitors from India - jackets and ties are optional during Cool-Biz. Indeed, on June 1, as rain drove the humidity up, Japan launched 'Super Cool-Biz', declaring Hawaiian shirts and sandals as acceptable office attire.

Super Cool-Biz is an apt metaphor for how Japanese business - and Japan itself - is adapting to changes at home and in the world. The country's population of around 127 million is greying and shrinking. It is expected to decline 0.077 per cent this year. The median age is 44.8 years, compared with 26 in India.

Only 13 per cent of Japanese are less than 14 years old, compared to 29.7 per cent of Indians. Japan's economy shrank 0.05 per cent in 2011. The interest rate has been zero per cent for the last three years. These numbers have forced Japanese companies to look overseas for growth.

Consider insurance. Penetration is 93 per cent, and insurers cannot grow within Japan unless they fight each other for a bigger slice of a shrinking pie. Insurers are preparing for the huge wave of retirement that Japan is expecting in the next four years, by designing more retirement products. For asset management, they need to invest clients' funds abroad.

"Today, it is important for us to buy into the growth in India," says Yoshinobu Tsutsui, President and CEO of Nippon Life Insurance, the largest life insurer in Japan, and the sixth largest in the world. He is putting his money where his mouth is. Nippon Life bought a 26 per cent stake in Reliance Life Insurance Company Ltd in March 2011. It also announced the purchase of a similar stake in Reliance Mutual Fund in January 2012. 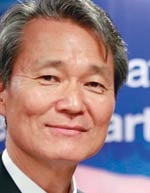 We are not worried about short-term issues...India’s growth is a longterm reality: Yoshinobu Tsutsui
The Japanese financial services industry has made several investments in India in the last year. Life insurer Mitsui Sumitomo said earlier this year that it will buy out New York Life from Max New York Life. Tokio Marine's joint venture with Edelweiss, formed in 2008, started operations in 2011.

Japanese companies have invested in the US and Europe, but find the growth rates there unexciting. Often a lot of business in the US or UK is restricted to selling to Japanese expats and companies operating in these markets.

Daiwa is also investing in ASEAN countries such as Vietnam where the regime is more investor friendly than India's. Then there is Brazil, which has almost 1.5 million people of Japanese origin who migrated early in the 20th century. This population is a ready market for Japanese companies and is a great inducement for investing in Brazil.

Daiwa Securities Group's Senior Managing Director Mikita Komatsu does not share the bullishness of Nippon Life's Tsutsui about India. Komatsu, whose office is in the Gran Tokyo North Tower, also in Marunouchi, says things are "not so easy" for Japanese financial services players in India.

Komatsu says two decisions by Indian regulators queered the pitch for Daiwa in India. Daiwa is a primary dealer registered with the US Federal Reserve, and wants to expand in Asia. It applied to register with the Reserve Bank of India too as a primary dealer here. "A month before the decision, they changed the rule to make a year's experience in bond dealing in India mandatory," said Komatsu. RBI's decision proved costly for Daiwa, which had set up a subsidiary. Then, the Securities and Exchange Board of India (SEBI) decided to disallow entry load on mutual funds. This derailed Daiwa's plan to start a full-fledged asset management business. Komatsu is also disappointed by the Indian economy's 5.3 per cent growth rate. 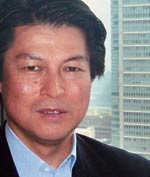 Two decisions by Indian regulators queered the pitch for us in India: Mikita Komatsu
But Tsutsui is unperturbed. "We are not worried about short-term issues," he says. "Insurance is a long-term business, and India's growth is also a long-term reality."

Not even the 2011 earthquake and tsunami got in the way of Nippon Life's pursuit of India. On March 10 - the day before the tsunami - Reliance Capital CEO Sam Ghosh returned from Tokyo with the draft agreement that would give Nippon Life a 26 per cent stake in Reliance Life. Tsutsui was to visit Mumbai for the signing ceremony three days later. He could not make it, but the high water did not deter Nippon Life from formalising the pact on e-mail. In January 2012, Tsutsui finally made it to India - this time to buy 26 per cent in another Reliance Capital subsidiary, Reliance Mutual Fund.

It is not just the Japanese financial sector that is interested in India. Alok Prasad, who was India's ambassador to Japan until June 30, 2012, says all sectors of industry there are eyeing the Indian market. "We have been holding prefecturewise meetings in Tokyo to introduce companies to India," he told Business Today. "We get at least 100 to 120 small and medium companies at each meeting."

Arun Goyal, Minister (Economic and Commercial) at the Indian Embassy in Tokyo, says: "Today, 850 Japanese companies are active in India. There were only 200 around four years ago."

The India-Japan Comprehensive Economic Partnership Agreement, which came into force in August 2011, has helped open up the Japanese pharma sector for Indian companies, and improve Indian professionals' access to Japan's job market.

Small Japanese companies have woken up to India, too. (Read about Mika International's efforts to sell a samosa-making machine). Much of this interest in India is due to Japanese companies' disillusionment with China. Jun Hemmi, Executive Director of Edelweiss Tokio Life Insurance Company, who was the first CEO of Iffco Tokio General Insurance Company nearly a decade ago, says China is a challenge for Japanese companies. "We have not been best of friends," he says. "It's like an Indian company trying to sell retail products in Pakistan. India is where we want to be for growth." He adds India's regulatory regime is fairer than China's, and the state-owned Life Insurance Corporation of India will not have an unfair advantage over private insurers.

Hemmi says Tokio Marine, which manages large pension funds in Japan, would like to invest some of that money in India. The exchange rate is a worry, though. "In 2000, a rupee equalled three yen, but now it is less than 1.5 yen," he says. However, he adds that India, like any democracy, works at its own pace, and Japanese companies are fine with that.

They do not accept everything, though. Nippon Life, for example, is trying to influence the work culture of its Indian venture. More than 90 per cent of its Japanese insurance advisors are women, for instance, and it is urging Reliance to explore the possibility of a similar trend, say Reliance Capital officials. It also emphasises staying actively in touch with customers for policy renewals and claims processing. In March 2011, after the earthquake in Japan, Nippon Life advisors searched for surviving customers in relief camps to help them file claims.

Tsutsui of Nippon Life insists that in the 60th year of India and Japan's formal diplomatic relationship, the two countries should forge ties that go beyond economics: explore cultural links and their common Buddhist heritage.

Mismanagement pushes TN Electricity Board to the edge