Jewellery retailers push ahead with ambitious expansion plans, spurred by an easing of the curbs on gold imports.
Shamni Pande        Print Edition: July 6, 2014 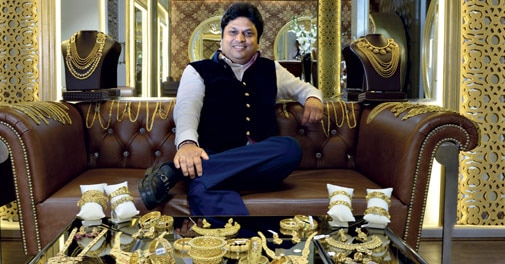 Poonam Bansal, a Gurgaon-based homemaker, had been putting off buying gold jewellery for the last three years. But now she is ready to shop. Her decision has a lot to do with the plunge in the price of the yellow metal after the Reserve Bank of India eased its import in May. Gold prices fell below the Rs 27,000 per 10 gm mark in May from a peak of Rs 32,460 per 10 gm in November 2012. According to India Ratings & Research, a Fitch group company, gold prices in 2014/15 are likely to hover in the range of Rs 25,500 to Rs 27,500 per 10 gm.

"Gold has the second highest share in India's imports. So easing of curbs has had an impact on price," says Neelesh Hundekari, Partner, AT Kearney. In May, the RBI allowed the import of the precious metal by large private gold importers with a caveat that at least 20 per cent of the amount brought in would eventually be exported out of the country as finished product.

But there are also many who, unlike Bansal, have been buying gold irrespective of its price. "My sister did not wait, she has been shopping for jewellery consistently every year," says Bansal. No wonder, gold retailers such as T.S. Kalyanaraman, Chairman and Managing Director, Kalyan Jewellers, say prices make no difference to his business. "Gold prices may increase or decrease but customers will remain happy," he says. The drop in gold prices came after a decade of hardening - from Rs 5,332 per 10 gm in 2002 to Rs 30,164 per 10 gm in 2013. According to the AT Kearney report, however, even with gold prices rising about 3.8 times between 2005 and 2012, demand for gold jewellery in terms of volume remained steady. In terms of value it grew 4.2 times in nominal terms, despite higher import duties. "Indians buy gold jewellery also as an investment, given the lack of other options," says Hundekari.

Kalyanaraman agrees. "Indians will be happy if gold prices increase because they know that the value of ornaments they possess is appreciating," he says. He adds that consumers are equally happy if prices dip. since they can now buy more gold jewellery. This is the reason he has been laying great emphasis on expansion, and spending on advertising as lavishly as fast moving consumer goods companies do. Kalyan Jewellers has invested Rs 1,300 crore to beef up its retail store strength to 55 showrooms across the five southern states, Gujarat, Maharashtra, Delhi and Punjab. It has also set up six showrooms in the United Arab Emirates. It plans to add 17 more in India and 11 in West Asia. "We have an advertising and marketing spend of Rs 200 crore this year," he says.

Gold prices may increase or decrease, but customers will remain happy: T.S. Kalyanaraman, CMD, Kalyan Jewellers
Tanishq was unwilling to share details of its investment on expansion and advertising. But its high-decibel promotional campaigns using celebrities such as Amitabh and Jaya Bachchan, Sridevi and Kangana Ranaut make its approach clear.

About 80 per cent of the jewellery market consists of local and regional players who have, at best, just a few stores. These too have been growing at eight to 10 per cent over the past five years, according to industry experts. The branded jewellery chains, in comparison, have seen growth of up to 30 per cent. "Quality of gold is an issue people are waking up to. They are switching to branded jewellery which has led to growth in our segment," says Balram Garg, Managing Director, PC Jeweller (PCJ).

Some branded chains have begun targeting the smaller towns and cities. PCJ, for instance, is scaling up operations by adding 100,000 sq. feet of retail space this year, largely in the Tier-II towns. "We find great demand for branded gold in Tier-II towns. Our push has been equally distributed towards these markets," says Garg. This year the company intends to set up 17 retail showrooms in markets such as Guwahati, Ranchi, Patna and Jammu. This will take its presence up to 58 stores across the country. "We will be investing Rs 700 crore on our expansion from internal accruals," Garg adds. Several regional players too are exploring markets outside their home territory. Senco Gold from the east is looking to expand outside its region. Corporate brands such as Reliance Jewels have expanded operations across the country. Gitanjali Group, one of the older brands in the country, is doing the same. Meanwhile, Dubai-based jeweller Joyalukkas is, according to industry sources, investing upwards of Rs 500 crore to set up showrooms in north India.

PE investors are also getting interested in jewellery retailers. "I think branded jewellery has tremendous growth potential. Consumers will continue to look for great designs and trust in quality. PE players will be interested in online and offline jewellers. I think there is tremendous opportunity for both," says Vani Kola, Managing Director, Kalaari Capital, one of the PE investors in BlueStone.com, an online jeweller.

The Indian gold jewellery market then appears poised for rapid growth over the next few years.