Kashish Sanan Gupta, a Delhi businesswoman who runs a Subway franchise, was desperately looking for the perfect birthday dress for her five-year-old, Karisa, in January this year. Outlets that sold even leading children's wear brands did not have the sort of day dress she wanted.

"Some local brands had dresses, but they were too gaudy," she says. She finally found what she was looking for at a new store in the swish DLF Promenade Mall in Vasant Kunj, South Delhi. The store, called Kidology, had a sale on, and Gupta bought her daughter a sea-green dress designed by Gauri & Nainika for Rs 5,000.

Friends and business partners Karina Rajpal, Ankur Mittal, Neha Sachar Mittal, and Maya Nocon launched Kidology because, as Ankur, a former investment banker, puts it, "Indian designer wear and affordable luxury for kids were non-existent categories in India." The store sells Indian and western wear designed by the likes of Malini Ramani and Ritu Kumar, for children up to 10 years old.

Children's outfits priced at Rs 12,000 may sound steep, but the partners say there are takers at that price. There is quite a crowd on the kids' wear bandwagon, and segmentation has stretched in the past year to include luxury. While Big Bazaar is among those that cater to the mass segment, Gini & Jony and Lilliput operate in the medium category. Homegrown brand Lilliput Kidswear, which started in 2003, has the early mover advantage, with 261 exclusive outlets and 541 shop-inshops in the country.

The store, started by Swati Saraf and her businessman husband Siddarth Saraf, promoter of Ferro Alloys Corporation or FACOR, opened its doors at Delhi's DLF Emporio luxury mall in November this year. "People view their children as extensions of themselves," says Swati. "When they take them out, they want them dressed like themselves. We felt India lacked luxury for children." Global brands are here, too.

Gucci, Tommy Hilfiger and Chicco, among others, have been selling their kids' wear in India for about a year. Chicco India, which sells premium apparel, prams and travel gear for children, is a fully owned subsidiary of Artsana, a e1.4-billion Italian maker of health and wellness products.

"An increase in the number of double-income families, peer pressure, global retail formats, and awareness of international brands are key drivers for the growth of this market," says Amit Gugnani, Vice President, Apparel Operations, at consultancy firm Technopak. 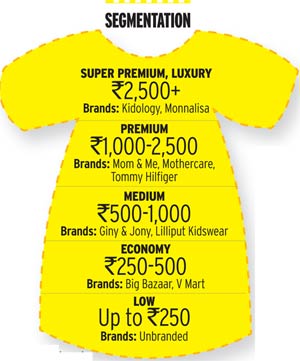 The Associated Chambers of Commerce and Industry estimates that the industry is worth Rs 38,000 crore, and growing at a compound annual rate of about 20 per cent to reach Rs 80,000 crore by 2015.

Kidology's same-store sales - a retail industry metric to distinguish a rise in sales within a store from an overall increase in sales due to the opening of new stores - have grown more than 40 per cent in the past year. Besides its own stores in Delhi and Mumbai, Kidology also sells through other retail outlets in Mumbai and Hyderabad. It is in talks with private equity funds, and plans new stores in Chandigarh, Ludhiana and elsewhere.

"Competition is definitely increasing, and consumers are becoming brand-conscious," says Anil Lakhani, Executive Director, Gini & Jony. The 31-year-old brand, which sells through 230 exclusive stores besides other outlets, is growing at a compound annual rate of 33 per cent.

Indian children have never been more spoiled for choice.