A Russian conglomerate takes a contrarian stance in India wagering on mobile data services and, two years later, sticks by that bet.

When Utpal Kant Agarwal, a New Delhi-based tax lawyer, bought a Hewlett Packard notebook computer, two months ago, he decided to invest in an MTS wireless data card which allowed him to connect to the Internet. MTS, a mobile phone and data service run by Sistema Shyam Teleservices, was not his first choice. He had plans to sign up for rivals Reliance NetConnect or Tata Photon Plus services.

What swung him to MTS India was its attractive pricing. At Rs 1,000 for the MTS Blaze dongle, it was about a third of what the other two services were priced at and the other attraction was MTS service is pre-paid - something others did not offer then. "It was the cheapest, and in the past couple of months I never had any problem," says Agarwal. 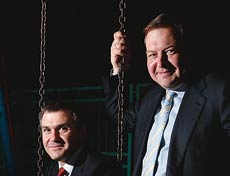 Leonid Melamed (L), CEO of Sistema, with Vsevolod Rozanov, President and CEO of Sistema Shyam Teleservices
It is a start and MTS India, controlled by Sistema, which also controls Russia's largest mobile phone firm OAO Mobile TeleSystems, has some nine million voice customers but there are signs that the company may have hit a sweet spot in the contrarian call it took while entering India in March 2009.

It had then chosen to set up its network based on CDMA wireless technology, considered a standard on the wane with networks running on the rival GSM standard counting for three of four phone customers in India. Nearly half a million of MTS India's customers are wireless data card users. This has boosted its data revenue to nearly a quarter of its total revenues.

Bharti Airtel and Idea Cellular, in comparison, see data services stuck at around 13 per cent, which includes text messages, and VAS like ringtones and weather updates. Even as Reliance Communications and Tata Teleservices increasingly push down the GSM path, reducing focus on their CDMA business, MTS is steadfast with its CDMA plans. This strategy to stick with the CDMA platform is despite MTS India's average revenue per user a month, or ARPU, being as low as Rs 78, compared to Rs 198 of Bharti Airtel and Rs 172 of Vodafone Essar. Analysts are not too optimistic. "Reliance is predominantly focusing on GSM… And for a new player like MTS, I don't see a future," says Archit Sehgal, analyst at Jaypee Capital, a brokerage firm.

But as its reach grows beyond the top 100 Indian towns, MTS expects the data contribution to its revenues to increase. "Data heavy strategy is common across the globe, but more so in India," says Mikhail Shamolin, CEO, MTS International, adding that when the next round of predicted consolidation happens, his fi rm will be ready. Will high-speed data services offered by new 3G phone licensees be a threat to MTS? Vsevolod Rozanov, President and CEO of Sistema Shyam, believes that by the time such operations scale up, MTS would have become a dominant player.

He cites the example of China Telecom, the No. 1 mobile phone firm in China, which runs CDMA networks and adds three million customers a month. That milestone is far away but MTS is taking steps to get there: a launch of MTS-branded handsets will kick off in the coming months.

Rozanov has a stiff target set by the Sistema board: operating profi ts by 2013 and net profi ts a year later. "Our business case is unique and MTS is still a start-up for us," says Leonid Melamed, CEO of Sistema. "The task here is multi-dimensional - gain market share, ensure quality of customer experience - but we can do it."