Life's not so good

It is 8:30 in the evening, and Aman Thukral's multi-brand consumer durables store in Kalkaji, South Delhi, is full of customers. One of them is keen on buying a 3D LED (three-dimensional light emitting diode) television. The buyer has to choose between a Sony, Samsung and LG product.

"Sony and Samsung are the best LEDS if you want to buy a top-end model. Sony is slightly better than a Samsung," Thukral tells the customer.

"What about LG," the customer asks. "LG is good, but more a low-end brand, like Toshiba but slightly better," says Thukral. "And what is the price difference between Samsung and LG," inquires the customer.

"Around Rs 10,000 to Rs 12,000," says Thukral. "But Samsung's panels are among the best in the world." The customer notes down the details and walks out, promising to come back the next morning.

The exchange is an agonising one for LG, the second-largest seller of consumer durables in India by revenues. The Korean chaebol (conglomerate) entered the country in 1997, two years after shedding its original name, Lucky Goldstar. In no time, it eclipsed Videocon, Onida and BPL to become India's biggest consumer durables brand. It followed a simple strategy, seeding the market with low-priced products that were superior to Indian ones and soon became a mass market brand. That success has become a millstone for LG today. For the past five years, it has been trying hard to reposition itself as a premium brand. Reason: that is where the real money is. But, to date, LG has little to show by way of success.

In 2010, LG was still the biggest company in the consumer durables space. But it was knocked off its perch last year by Samsung. To be sure, it is still the leader in most product segments - flat panel televisions and mobile phones are the exception - and its market share has been growing in absolute terms. However, its business has not been growing as fast as Samsung's. LG'S revenues grew a minimal 1.2 per cent to Rs 16,200 crore in 2011, while Samsung's grew 25 per cent to Rs 20,000 crore. Together, the Korean rivals control nearly a third of the Rs 1.2 trillion domestic consumer durables market (one trillion equals one lakh crore).

Many, including former LG executives who took the company to the No. 1 position a decade ago, blame poor strategy for the decline. They believe LG was better off as a mass market brand. "LG has become a yo-yo trying to do everything - sometimes premium and sometimes mass market," says Rajiv Karwal, former head of sales and marketing at LG India. Click here to Enlarge
The Korean company began targeting the premium segment in 2007 under then Managing Director Moon Bin Shin. His successor, Soon Kwon, President, South West Asia and Managing Director of LG India, is pulling out all the stops to get the company back on the high growth trajectory. And becoming a premium brand is central to his strategy, too.

When Kwon started heading LG'S India operations in December 2010, he had only one mandate: strengthen the brand's position in the country. "There is a worry that we need to tackle things before it is too late," says Kwon. "The ultimate winner will be the one who has the highest brand perception."

Soon after taking over, he summoned about 40 senior executives to his cabin on the first floor of LG'S corporate office in Greater Noida, Uttar Pradesh. During the meeting, which lasted all day, the top brass discussed everything, from products needed for the Indian market and channel (distribution) strategies to the timing of product launches and media planning.

There is a latent demand for high-end consumer durables in India, says Kwon. These include front-loading washing machines and fully automatic top-loading models with more than 7 kg capacity; frost-free refrigerators with capacity of 400 litres or more and direct-cool refrigerators with capacity of 230 litres or more; all 3D LED televisions and all LED televisions with a screen size of 42 inches or more; and all smartphones priced above Rs 20,000.

In Shin's time, LG had failed to launch enough global high-end products. But within a couple of months of the meeting in Kwon's room, LG launched its high-end televisions, washing machines and refrigerators in India. Kwon frequently zips into the competition's retail stores to understand how they position their products in a showroom - the latest being a visit to a Samsung store in Ahmedabad. His efforts are beginning to pay off - LG is slowly finding some traction in the premium category. In calendar year 2011, its market share in the 3D television category shot up from 1.7 per cent to 23.2 per cent; in the premium refrigerator segment, it rose from 31.3 per cent to 36.2 per cent. LG'S share also grew in the washing machine and LED segments.

"In LCDs, we grew 30 per cent and 3D is a platform which we have driven singlehandedly," says Lakshmikant Gupta, Vice President, Marketing, LG India. The television segment accounts for 25 per cent of the Rs 70,000 crore consumer durables market (excluding mobile phones, which account for Rs 50,000 crore). 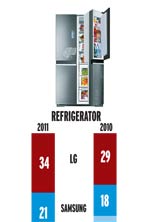 Click here to Enlarge
However, there is a catch. A consultant, who does not want to be named, as LG is one of his clients, says that even though volumes are high, the company's average product price is lower than Samsung's by about five to 10 percent, depending on the product.

And therein lies the rationale to go premium. High-end products allow manufacturers, distributors and retailers to earn twice the margins mass market products such as box televisions and semi-automatic washing machines offer. And Kwon wants LG to rack up the numbers in this bracket.

"Earlier the premium segment was a niche segment, now it is a significant 25 per cent of the market," explains Purnendu Kumar, Vice President, Technopak. And that is the reason behind LG'S continuing efforts to reposition itself as a premium player, says Harminder Sahni, Managing Director of Wazir Advisors. "That's where the real margins lie."

LG has also lost the plot on another front. The mobile phone segment accounts for 40 per cent of the overall consumer electronics market, and this is a category in which it is almost invisible. Samsung overtook LG last year after becoming a formidable mobile phone brand. It controls about 12 per cent of the total market, and 55 per cent of its India revenue comes from mobiles. LG does not even figure among the top five mobile brands in India. "Market leadership in mobiles is very important to sustain overall market leadership," says Kwon.

LG'S dash to become a premium brand faces another hurdle with Japanese brands such as Sony and Panasonic seeking to expand aggressively in India. Until 2010, Panasonic barely had a presence in many product verticals. Today, it is pushing hard to build market share across the board. "We are operating at lower margins," says Manish Sharma, Managing Director of Panasonic India's consumer products division. At the top of the pyramid, the company launched a range of front-loading washing machines, inverter refrigerators and LED TVS. It plans to invest Rs 400 crore in marketing alone and will start manufacturing air conditioners from October 2012. "We will be No. 1 in air-conditioners by the end of this year," says Sharma. LG currently commands 28 per cent of this market.

The Japanese companies will take years to match LG'S extensive distribution network. In urban India alone, only Samsung and Videocon come close to its reach of more than 20,000 retail points, including 500 LG branded stores. Samsung has about 17,000 outlets while Videocon has around 12,000. "LG and Samsung have achieved a high level of penetration," says Sahni of Wazir Advisors.

Kwon is also hoping to leverage LG'S mass market presence to make inroads in the premium segment. The company can gain hugely from the replacement market, which accounts for 50 per cent of consumer durables sales. Many consumers will be looking to upgrade products and brand loyalty may make a big difference here. Take the case of Sushmit Sahay, a human relations executive with a private bank in Delhi. Sahay first bought an LG product - a 14" colour television - eight years ago. "Since then, every electronic item I have brought has come from LG," he says. Sahay has about five LG products, including an upgrade: a 42'' LED TV.

If he wants to resurrect LG'S fortunes in India, Kwon who has spent 25 years with LG, will have to bring all his experience to bar. He will also need to count on many more customers like Sahay.

All is not well with Indian cotton industry