Live in the cloud

Cloud Computing is impacting your life and changing the dynamics of the software and hardware industries. But what on earth is the ‘cloud’?

Peter Coffee
Chances are that you use a web-based e-mail service such as Hotmail, Yahoo Mail, Gmail or Rediffmail. Some of you might have even played about with the idea of editing documents online through Google Docs. You might have shared files with friends and family using YouSendIt, RapidShare or even Microsoft’s SkyDrive. Others have shared and edited photographs online using Flickr.

The Internet is not just taking over your digital life, it is increasingly becoming where your digital life is being stored. And it is all made possible by something called cloud computing, a rather amorphous term used to describe a host of services that are delivered straight to you via the Internet. The idea is so popular, that even the cartoon strip Dilbert’s protagonist created a “cloud computing” service called Dilbertfiles.com to help in file-sharing.

However, cloud computing is not just about delivering free e-mail to your machine. Companies have been harnessing cloud computing for a few years now by consuming Software as a Service (SaaS). As companies need to suddenly expand, buying hundreds of software licences is impractical. At the same time, several companies only need to use certain pieces of software for special projects. Buying the whole piece is often prohibitively expensive and pointless. This is where SaaS fits in and some companies are making a living here.

Peter Coffee, Director for Platform Intelligence at Salesforce. com says that India is the right place for cloud computing. He says: “For a country like India where there may be intermittent Internet connection and power outages— cloud computing is perfect. Our software works with an intermittent Internet connection—updating whenever the connection is working and you do not need high bandwidth either. And if there is a power cut but your laptop works on battery, and if you are connected to the Internet through a wireless connection, you can carry on working.” NIIT uses Salesforce for its corporate and institutional sales.

Chief Executive Officer of NIIT, Vijay Thadani, says: “The biggest benefit is that I do not need any of our sales people to send me reports. They can log in from their homes and update the data and we can access it and create the reports at the office without a problem. I get to know whom they have met and at what stage a sale is in and get enough inputs to decide if I need to call on the customer myself.”

Thadani adds that while the company needs to maintain a team of 30 for the SAP software that the company has implemented and runs it out of its own office with its own infrastructure and servers, it does not employ anyone for Salesforce.com. Echoing his views, Pradeep Bhowmick, Associate Director, PricewaterhouseCoopers, says: “The biggest headache that cloud computing takes away is that of getting the right people to manage the network internally and then retaining them.” The concept of SaaS, which is enabled by the “cloud”—as applications reside on the other side of the Internet connection—is finding an enthusiastic audience among entrepreneurs across the world. But not just software but also hardware. Animoto.com is one such example. 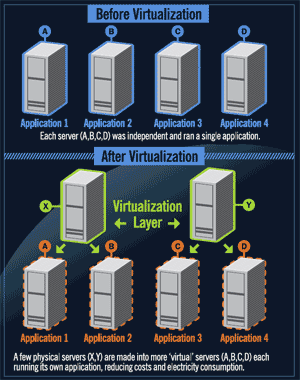 The average server computer runs at around 5-7% capacity. Virtualization can raise utilisation to 70%
In April last year, the website suddenly went viral, and instead of the average 5,000 people a day signing up, it had 25,000 people an hour queuing up. Usually, such a fantastic load would crash servers and result in a “Denial of Service” screen. For a start-up that screen is like a death wish, but this start-up managed to buy additional space to cope with the sudden spike in demand. And when the wave subsided, the website scaled down. All at a cost far lower than investing in tens of expensive servers. Can it work across corporate India? Can companies actually take up server space on rent and just connect to their employees through the Internet, with the software all coming off the cloud? Akhilesh Tuteja, Executive Director, KPMG, raises some issues with cloud computing and software as a service.

He prefers to call them challenges. One challenge is that the Internet is not yet a commodity in India. The second challenge is that while upfront costs may be low, the total costs over five years might be higher. And finally, as Tuteja asks: “What if the service provider goes bust?”

Cloud computing would not be possible without another land-mark technologIcal innovation that goes by the name of “virtualization”. Technology consultancy Gartner believes that this technology will be one of the fastest growing information technology applications in 2009 in India. So, what is it?

Simply put, it is about optimising hardware. According to Ganesh Mahabala, Regional Director, VMware, the average server computer in an organisation runs at around 5 per cent to 7 per cent of its capabilities. “Companies have gone and bought extremely reliable and capable hardware but they don’t end up needing all that firepower.” Other than data storage servers that have a high utilisation rate, most servers are essentially idling, because in most cases each individual server is running only one application.

What virtualization does is simple: Software from companies like VMware is added between the applications and the server. Therefore, a server can handle multiple applications and the same application gets split over several servers. Essentially, the system creates “virtual” computers (servers in this case). This means that server utilisation climbs to around 70 per cent. The administrator then manages virtual computers rather than real ones.

The system has become smarter over the years. Overhead processing capabilities are built in and even if one server does fail, since the system is interconnected other servers can seamlessly carry on the process, though sometimes with a reduction of performance. “Because everything is virtual, you won’t know that server X is running programme A. And if programme A suddenly sees a need for increased throughput, like a payroll application at salary time, it can spread out easily to other servers when you need it. You do not need to buy one massive, expensive server which you need once a month,” Mahabala explains.

There is another advantage. Server farms, a term used to describe massive rows of servers that companies need to maintain with increasing digitisation, are quickly becoming one of the largest consumers of electricity in the world. Fewer servers, or rather a reduced requirement for new servers, means less need for power, and thus stretching the analogy one can argue that “virtualization” is an environmentfriendly technology.

And Mahabala says that virtualization is not just limited to the server room, but could even make an entry onto the desktop. VMware sells technology that allows people to run multiple operating systems at the same time on the same computer. This is particularly popular with Apple users, who use the technology to concurrently run Mac OS X and Windows Vista. Users of shared computing services already use virtualization, as the same computer in certain cases is running two, sometimes three, separate sessions.

The virtual world just got virtual. How is that for a head-spinner?

People, will miss newspapers when they are gone?