Many major pharma stocks, seen as safe bets in the worst of times, have seen their market caps slip in the past year. Is pharma losing its sheen on the bourses?
E Kumar Sharma Print Edition: November 20, 2016 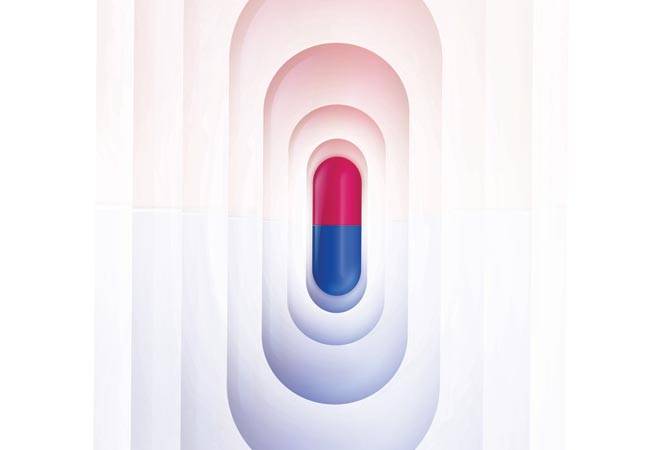 Just past 10 am on September 20, 2016, Cadila Healthcare had informed the stock exchanges that it had entered into a partnership with Takeda Pharmaceuticals of Japan to develop a Chikungunya vaccine. The stock price immediately shot up by 6 per cent, taking its market capitalisation to Rs 40,238.20 crore. But in just 10 days, it slipped to Rs 39,721.20 crore - lower than the Rs 43,010.50 crore clocked on October 1, 2015. (However, in the BT 500, which ranks companies based on a year's average market cap, Cadila's valuation rose 5 per cent.)

But Cadila is not alone. Many large pharma companies saw their market caps slip over the past one year, raising doubts of whether the famed defensive sector on the bourses, had lost its sheen. In the BT500, Sun Pharma, the biggest player from India, saw its market cap slide by 3.8 per cent from Rs 201,259 crore to Rs 193.570 crore during the period. Dr. Reddy's was down 9 per cent from Rs 60,104 crore to Rs 54,579 crore. The market cap of Cipla, which earns nearly half of its revenue from the domestic market unlike many others with more export revenues, too, declined 13.6 per cent from Rs 52,696 crore to Rs 45,533 crore. Glenmark, arguably the only Indian company that has held on to its new drug research for close to 15 years, remained stagnant at around Rs 24,100 crore; Lupin, too, did not flutter.

Experts say regulatory overhang has been one of the reasons behind the way the market has perceived pharma stocks. Observations and warning letters from the US Food and Drug Administration (FDA) has been a major setback because the US is still the major contributor to the profits of most companies. G.V. Prasad, Co-Chairman and CEO, Dr. Reddy's, for instance, says: "Our top priority remains on the regulatory front and if we can get the warning letters cleared for all our three sites, we will start seeing growth."

D.G. Shah, Secretary-General of the Indian Pharmaceutical Alliance, which has leading Indian pharma companies as its members, concedes: "Over the past two to three years, we have seen that the markets have been subdued due to compliance-related issues faced by some companies. There has also been the impact of pricing pressures both in the US - partly due to heightened competition among generic firms and mergers among large wholesalers procuring generic drugs - and in India following price control measures imposed by the government." AIOCD AWACS, which tracks pharmaceutical retail sales in India, says, as of September 2016, the actual impact of the price control measures "would vary for each company, but the average value loss for all Indian pharma companies has been to the tune of 0.9 per cent of their domestic sales". However, Shah feels that the cyclical nature of pharma stocks is also at play. "There is a consolidation period that the pharma industry has gone through from 2015 and this will continue till 2017. My personal view is that by 2017 most companies would have overcome those issues, and 2018 onwards you will see a period of sustained growth for the next five years," he adds. Lupin, for example, was hit on the compliance front following negative observations from the FDA. Though most issues have been sorted out, the response from the US regulator on its second audit of the company's Goa facility is still awaited. Credit Suisse, in its August 2016 report, also points to other challenges facing the company: "Lupin's high profit concentration in its largest drug Fortamet, which contributed 35-40 per cent of its 2016/17 profits (is a concern), because there is high probability of competition entering the space in the next twelve months." The report adds that Mylan Laboratories, an American generic and specialty drug maker registered in the Netherlands, which is trying to get into the Fortamet market "could impact Fortamet sales for Lupin by 40-50 per cent".

The problems for Lupin could further add up with almost half of its 2017/18 profits expected to come from its top three drugs in the US - Fortamet, Glumetza and Minastrin - compared to only one-third for Dr. Reddy's and 20 per cent for Sun Pharma. Sun Pharma's top selling drugs are Absorica, Gleevec and Doxil, while for Dr. Reddy's, Decitabine, Metroprolol and Sumatriptan are the best sellers. This shows that the regulatory overhang is just one aspect, but other company-specific factors have also contributed a great deal to the decline in the market caps of pharma companies. In fact, slow regulatory approvals for the launch of new generics in the US market have also affected many Indian drug manufacturers. Dr. Reddy's, for instance, got just two approvals in 2015/16 against seven in 2014/15.

"We took a signifi cant hit last year on account of currency depreciation in emerging markets. However, we have covered it up from other geographies"

However, for Glenmark, the problem has been quite different. Between April 2015 and March 2016, the company got 19 approvals for the launch of generics in the US and another nine thereafter, but the negative impact has primarily been because of its poor performance in the emerging markets, excluding India. "We took a significant hit last year on account of currency depreciation in emerging markets. However, we have covered it up from other geographies to ensure the overall business continues to grow," says Glenn Saldanha, Chairman and Managing Director, Glenmark Pharmaceuticals. The company, in fact, is beginning to see an increase in the share in revenues from the US, Europe and India. US revenues are also expected to go up from the existing 32 per cent, given the large number of US approvals it had got last year. Analysts feel the company's share of emerging markets, excluding India, will contribute less than 20 per cent of its total sales this year, against the over 30 per cent two years ago. Share of US and India sales, on the other hand, may go up from 50 per cent to 65 per cent.

"Over the past two to three years, markets have been subdued because of compliance-related issues and the impact of pricing pressures in the US and in India"

"Not only are new approvals slow, but even for those approvals that have come through, the net realisation in the market from sales is lower than earlier. For instance, the approval coming in today, had it been three years ago, it would get, say, around $30 million as against, say, around $15 million today, because of the pricing pressure, increased competitive intensity and the impact of channel consolidation in the US. All this adds up to a very difficult situation for a generic company," says a leading analyst on the condition of anonymity.

In the US, only four large wholesalers and chains source generic drugs, compared to about a dozen three years ago. The majors includeWalgreens Boots Alliance-ABC (AmerisourceBergen), CVS-Cardinal Health and Rite Aid-McKesson-Walmart. This means they have tremendous bargaining power and that puts more pressure on the pricing of drugs.

Adding to the woes of the Indian pharma companies are the stated positions of both US presidential candidates, Hillary Clinton and Donald Trump, to cut healthcare costs in the US. However, the pharma sector is confident of a turnaround going ahead.