'Microsoft is still about the magic of software'

In an exclusive interview, Gates talked about everything from the Apollo moon landings and the controversial AIDS initiative of the foundation and even a passing reference to Google. 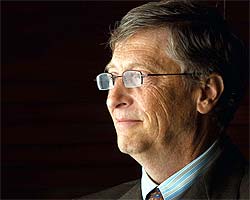 On a visit to India to receive the Indira Gandhi Prize for Peace for the work done by the Bill and Melinda Gates Foundation, Microsoft Chairman Bill Gates also caught up with the activities of Microsoft India and his pet project, Microsoft Research, which is doing ground-breaking work on humancomputer interaction in Bangalore. In an exclusive interview with Business Today’s Rohit Saran and Kushan Mitra, Gates talked about everything from the Apollo moon landings and the controversial AIDS initiative of the foundation to the magic of software and even a passing reference to Google. Excerpts:

It has been 40 years since the Apollo II expedition to the moon. What did that mean to you as a young boy in America in 1969?
Well, a lot. Staying up at night watching updates on TV. Thinking of the scientific advancements that were required to achieve this safely! What really led to this was the competition with the USSR. It made the US put more money into math and science and the dividends on that paid off over time. The so-called DARPA (the Pentagon’s Defense Advanced Research Projects Agency) money was a result of the science of which the moonshot was an exemplary project.

Do you feel the US is losing some of the edge it has had in research since the end of World War II? Forty per cent of the PhDs being done in the US in Science are by foreign citizens…
Well, there is nothing wrong with that. A lot of smart people have always wanted to go to the US from across the world. Current US policies do not take full advantage of that and I have been critical of that. But when you think of improvements in the world, it is not a goal to have the US’ relative position as strong. The US’ relative strength was the strongest in 1946. So, in a certain relative sense, it has been downhill from there.

A lot of advances, in computer and medical sciences, are still being done in the US.. It would be good for the rest of the world to reduce that relative lead. Not reduce the absolute innovation, but more in proportion with their share of the world’s IQ. It’s great that at least India and China are making progress in that direction.

You have put in an additional $80 million in the AIDS alleviation project being funded by your foundation. However, there have been stories written that the $253 million invested so far has been wasted…
Listen, I’m sorry that you read journalism of that quality. You should do some research. These people are excluded usually from the benefits of protection from this disease (AIDS), and what Avahaan did in terms of building those communities and reducing risky behaviour and saving lives is phenomenal. The data is very clear: Condom use has gone up, violence has gone down, sexually transmitted diseases have gone down. Go to the communities, talk to these excluded people and then write.

Do you feel there are unrealistic or heightened expectations whenever Bill Gates comes along?
No. Half the world’s children who are not vaccinated are born here. They don’t know my name. They’ll never know my name. They have no expectation or anything. The goal should be to get them vaccinated so that they don’t die. And is that too high an expectation, that India should do as well as, say, Bangladesh in terms of vaccination? I don’t know, but on behalf of those children we should be ambitious.