Who's afraid of dry days?

Rajiv Agarwal's job would be the envy of most journalists. It is likely that his work gets read by Prime Minister Manmohan Singh everyday. Indeed, sifting through Agarwal's reports is probably high on the priority list of Singh and his staff.

Agarwal is secretary at the union government's Department of Consumer Affairs and compiles a report that tracks retail prices of 23 essential commodities, including some vegetables, across 50 locations in India. By 5 pm, Agarwal sends his report to Singh, making it almost a real time assessment of food inflation for the Prime Minister.

It is not hard to fathom the close scrutiny of the food inflation data by policy wonks. With mounting concerns over the tardy progress of the South-West monsoon in India, Singh and his team remain worried about its impact on the economy, given the high food inflation in the country. Poor rainfall hurts agriculture, stokes inflationary expectations and may end up hurting growth.

The monsoon in June was 29 per cent below its 50-year average for the month, or the Long Period Average (LPA), which is used to measure adequacy of rainfall. It has raised the spectre of drought because the monsoon contributes about 76 per cent of India's annual rainfall between June and September. In fact, in only two of the 12 drought years in India since 1947 has the June rainfall been less than this year.

Agarwal says he cannot discern a clear trend from retail prices yet. Prices of coarse cereals are increasing. But it could be because the government announced higher support prices for them before the monsoon set in, according to him. Agarwal, then, sees a mixed picture with no clear emerging trend.

CHANGING ECONOMY
The full impact of inadequate rainfall will only be visible over the next few months but analysts are already pointing out that the monsoon's importance has diminished. With industry and services emerging as prime drivers of growth, the economy is increasingly becoming drought- resistant.

In any given year, about 16 per cent of India's total area is droughtprone, impacting some 50 million people. But with agriculture making up only 15 per cent of the gross domestic product (GDP), compared with 55 per cent five decades ago, monsoon's impact on the economy is now limited.

"A poor monsoon would impact prices more than growth," wrote Citi Investment economist, Rohini Malkani, on June 22. Yoginder K. Alagh, former member of the Planning Commission, who was also the power minister in the 1990s, believes that deficient rainfall in June can have an impact of "not more than a quarter or half a per cent of growth in agricultural output". And it is not just that agriculture's contribution to economic activity has declined - a season's rainfall no longer has a big impact even on agriculture.

Improving irrigation coverage is an important reason for partially insulating farmers in large parts of India from the vagaries of the monsoon (see Well Protected). About 45 per cent of the cultivated area is irrigated now, almost twice the coverage in 1970-71, the early years of the Green Revolution. Click here to Enlarge
It has meant that farmers have some kind of insurance against the unpredictable nature of the South-West monsoon. Consider this. In two of the last 10 years - 2002 and 2009 - a national drought was declared by the agriculture ministry. It is also within the domain of states to declare a drought, given the federal administrative set-up and varying agro-climatic conditions. In 2009, 14 states declared drought, covering 338 districts in all. That year, June's rainfall fell 47 per cent short of the normal.

There's another reason why it is too early to press the panic button - the crucial month for agriculture is July. "I have been told that rain in July and August will be good," Agriculture Minister Sharad Pawar said recently adding that the situation was not that serious.

COMBATING INFLATION
Inflation though remains a bugbear for the UPA government. Even before the onset of the South-West monsoon, surging food inflation had the central bank worried. In 2012, food prices have seen a relentless increase. Food inflation, as measured by the wholesale price index (WPI), was 10.74 per cent in May, compared with a negative 0.68 per cent in January. Deficient rainfall in June may put pressure on prices and is bound to make macroeconomic management tougher and squeeze household budgets.

I have been told that rain in July and August will be good: Sharad Pawar
"We have started to build in some inflationary impact of poor rain in June into our model," says Samiran Chakraborty, Regional Head of Research, South Asia, Standard Chartered Bank, in a report. Chakraborty and his team estimate that a delay in monsoon is likely to add 60 to 70 basis points (a basis point is one-hundredth of a percentage point) to inflation. Standard Chartered has raised its average inflation forecast for 2012/13 to 7.6 per cent from 7.2 per cent. WPI inflation stood at 7.55 per cent in May.

Alagh echoes these views on inflation but argues that it is necessary to understand recent changes in food habits as well as agriculture to comprehend the impact of the monsoon on inflation. Click here to Enlarge
"Grain is not the big problem," Alagh says, referring to rice and wheat. The Indian government after all is sitting on a mountain of grain. Literally.

Paddy is the most important crop grown during the kharif season from June to September. In May, the union government's stock of rice stood at 32.9 million tonnes, more than twice the recommended buffer. Thus, even a disappointing rice harvest has a slim chance of sending prices through the roof. To rule out the possibility of an increase in prices, the union government announced in July that it was going to allocate 3.07 million tonnes of rice to states for people below the poverty line.

Even grain traders are unlikely to start hoarding rice in anticipation of prices firming up. "Traders cannot take on Food Corporation of India," says Alagh. 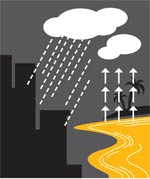 Over the last two decades, though, India's food habits have changed with rising incomes. Consumption of cereals such as wheat and rice has declined. Simultaneously, consumption of food rich in protein such as eggs, fish and milk has risen (see Pay the Price). Only pulses, an important source of protein, has bucked the trend and seen a decline in consumption.

Madan Sabnavis, Chief Economist, Credit Analysis and Research, says traders' would never bet against the huge stocks with FCI, which are primarily wheat and rice. However, they could hoard coarse cereals and pulses putting pressure on prices. India's consumption of coarse cereals has declined over the past two decades. However, their importance has not declined in the food basket. Instead of being directly consumed, they have begun to be used as animal feed. A rise in prices of coarse cereals, then, will eventually show up in inflation of protein rich food such as eggs and milk. Click here to Enlarge
There could be another fallout of inadequate rainfall this season. Almost 60 per cent of the population depends wholly or partially on agriculture for its livelihood and cannot remain insulated from a shock to the sector. And falling incomes tend to have an adverse impact on the composition of the food basket.

"Delayed monsoon could lead to shifts in cropping patterns. There could be distortions. We need to see what kind of shift in area under cultivation has taken place," Sabnavis says. Click here to Enlarge
Scanty rainfall in June has already affected the sowing of coarse cereals, particularly maize, bajra and jowar, according to Pawar. Typically, these crops are grown in rain-fed regions with little access to irrigation. In the first week of July, sowing of coarse cereals had declined by more than half of last year's level to 1.04 million hectares. "Income elasticity demand of some crops (pulses, oilseeds) is much higher," says Alagh, explaining consumption is sensitive to income swings.

So, while economic growth has become drought-resistant, most Indians will still feel the pinch. The UPA government, then, will have its hands full with keeping inflation in check over the next few months and shielding its core constituency, the aam aadmi, from the impact of a poor monsoon. "The welfare consequences for agriculture and rural population can be high," says Alagh.