Modern retail may not be a threat to its existence, but your neighbourhood kirana shop is spiffing things up anyway.
Arpita Mukherjee | Print Edition: May 25, 2014 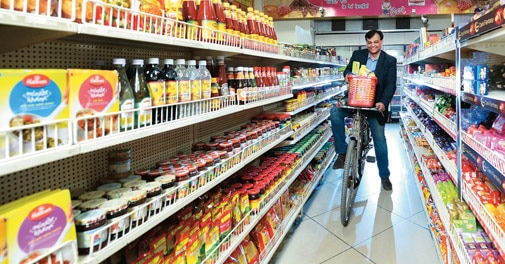 The opportunity really is from the web to the consumers' doorstep within 45 minutes using the existing supply chain... without anyone incurring any cost: Vijay Singh, MD and CEO of Aaramshop.com, helps traditional shops, such as All Needs Store in East De

On Sundays, Shishir Ashar is "relatively free". In his world - which revolves around New Ambica Stores in Mumbai's suburban Marol area - this still means he fields phone calls and tends to customers, politely and deftly. Sixty-year-old Suman Agarwal enters his store and rattles off the items on her list. Placing all the items in bags, Ashar takes the opportunity to suggest new products for her to try, and she takes the bait.

"I've been coming here for the past 15 years," she says, as she pays her bill of Rs 2,026. She says she shops here every fortnight, while praising the quality of the products and the fact that it grinds wheat into flour for her. She can even return products. There's a bigger store right across the road, but Agarwal does not shop there. The 25-year-old Ashar says that much of his clientele is like her.

The 30-year-old, 450-square-foot store got a makeover two years ago. Ashar and his elder brother Jignesh decided to renovate to ensure customer demand. "Customers are ready to pay if they get service," says Ashar. He adds that the ten shops in the area are all supermarkets. "People want everything under one roof. Had I continued to focus only on groceries, business would not have been good."

Like many owners of traditional kirana stores (mom-and-pop outlets), Ashar is not worried about modern retail shops. He has modernised his store while retaining the characteristics unique to kiranas that cannot be easily replicated. "The value proposition of kirana stores is unbeatable by modern retailers," says Ankur Bisen, Senior Vice President for retail and consumer products at global consultancy Technopak. Sunil Kataria, COO for sales and marketing in the SAARC region at Godrej Consumer Products, concurs, and says kirana stores are efficiently run. A study by Assocham and YES Bank shows kirana stores will continue to be the largest contributor to overall retail sales,

One such example is R. Ganesan, who ran away from home as a 13-year-old, and came to Chennai to see his matinee idol M.G. Ramachandran. In 1970 he set up a vegetable shop under a thatched roof. Within a decade, Sri Ganesh Vegetable Shop, now in spacious premises, became the go-to store for fresh produce in Chennai's Adyar locality. Unlike others, Sri Ganesh back then, allowed customers to choose the vegetables. In the mid-1990s, Ganesan ventured into groceries by setting up Vanga Vanga Supermarket. (Vanga means 'come' in Tamil.) Today both shops are under one roof - a 3,000 sq ft facility in the posh Gandhi Nagar area, not far from where Ganesan started out. In the last six years - around the time retail chains began to pop up in the neighbourhood - business has more than tripled. "Quality products, reasonable prices, customer service and the blessings of the Almighty are the key to our success," he says. Agosh Malik (right), thirdgeneration owner of The Morning Store in Delhi, takes orders via his website Photo: Aditya Kapoor
Traditional grocers also have an edge over modern ones in items such as grains and masalas, since they have better knowledge and sourcing ability, says Sameer Satpathy, Executive Vice President and Business Head, Marico India. "These are areas where the penetration of modern trade has been less," he says. 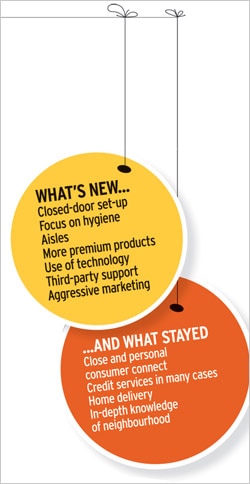 The smarter kirana store operators are tweaking product portfolios and adopting best practices from modern retail. They carry premium products, and have designed their stores to have aisles, security cameras and closed doors to improve hygiene and give them a modern look.

"They're definitely not under threat," says Godrej's Kataria. "But they're realising they need to change with the changing consumer profile." He says products that move fast at modernised kirana stores include relatively high-priced items such as anti-roach gel, room and car fresheners. Ashar says Nutella sells well.

As kirana stores modernise, consumer product makers such as Godrej and Marico say they gain. Marico's Satpathy says: "We see this as an opportunity to compete. Strong brands gain from such stores, because they're picky about their assortment."

Prakash Shah, who runs Swastik General Stores in the Mumbai's Chembur locality, is from the Kutchh region of Gujarat, and runs the 500 sq ft store his father set up 50 years ago. Today it looks like a mini supermarket. Referring to the aisles that let customers browse, Shah says: "Every customer today wants to be served first, no matter when they enter the store, which wasn't possible earlier."

To overhaul his shop, Shah took the help of Trans Retail Ventures, which operates the Aasaan chain of stores and helps shops modernise. "There are about 30,000 Kutchhi kiranas across Mumbai," says Aasaan's Executive Director, Vinayak Joshi. "If we're able to convert even 300, it is good." The not-for-profit organisation has worked with six kirana stores so far, and wants to convert at least 50 more by next year.

After modernisation, Shah says, clientele has grown and older customers are happier. Aasaan pays up to Rs 1,300 a sq ft for renovation, and has made an initial investment of around Rs 5 crore in its endeavour. 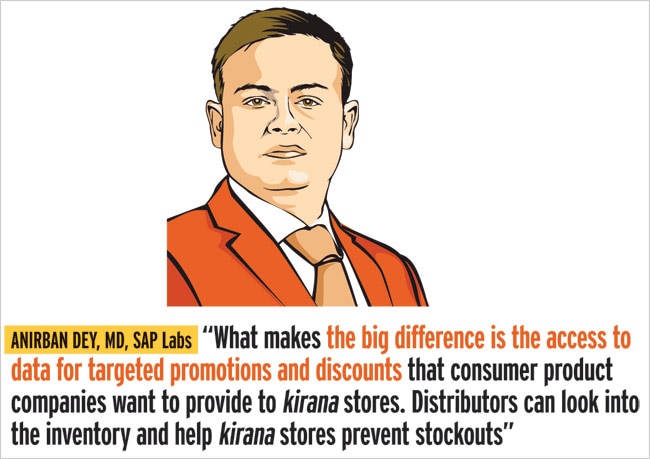 Technology providers such as SAP, and online grocery platform Aaraamshop.com, are also helping modernise shops. SAP's solution, SAP Ganges, aims to connect manufacturers, distributors and kirana stores in a transparent system. "What makes the big difference is access to data for targeted promotions and discounts that companies want to provide to kirana stores," says Anirban Dey, Managing Director, SAP Labs. "Distributors and companies can look into the inventory and help kirana stores prevent stockouts." Stockout refers to the exhaustion of inventory.

Dey adds that SAP Ganges's association with banks would help kirana stores get micro credit, as banks can get real-time information about a store's sales. The SAP Ganges pilot launch is scheduled for late April in select cities.

Aaramshop has created a network of some 3,000 kirana stores' inventory. Customers place orders online, and Aaramshop directs them to a retailer nearby. "The opportunity really is from the web to the consumer's doorstep in 45 minutes, using the existing supply chain... without anyone incurring any cost," says Vijay Singh, Managing Director and CEO of Aaramshop.

Aaramshop is trying to change the perception that deals are available only at large-format stores, which tend to advertise more, and to highlight offers. With simple tools, it helps retailers relay information about deals to customers.

Aaramshop and SAP earn profits not from kirana stores but from consumer product companies, distributors and - in SAP 's case - also banks.

Modernisation of kirana stores encourages the younger generation to stay in the family business. For example, G. Venkatesh, the son of Chennai grocer Ganesan has joined his father's business. What does Venkatesh, an MBA, think of the business? He says: "It is a good business to be in as long as you stay focused on customers. Our customers are loyal, and the proliferation of retail chains has not taken them away. This means we are doing it right."

The hand of kirana shops has been forced in some ways by changing times. For instance, both Ashar and Shah now limit the credit extended to older customers. Newer ones pay cash, they say, mostly for top-up purchases, while monthly supplies come from big-box retailers.

Agosh Malik, the third-generation owner of the Morning Store in New Delhi's Greater Kailash locality, says kirana shops are being hurt by inflation and modern retail chains. "Companies like Unilever and Nestle run promotional schemes at big-format chains that attract the customers, while we keep trying innovative methods to retain our customer base," he says. His strategy is e-commerce, which he started in April. Malik is not part of the emerging network of kirana shops, consumer product companies and technology service providers. His business is among those who are modernising on their own, and who often find new ways to reach out to customers. Aggarwal Supermarket, a West Delhi store that works with Aaramshop, sends out offers to some 800 customers via Whatsapp.

For now, young kirana shop operators such as Ashar in Mumbai, Malik in Delhi and Venkatesh in Chennai, have found ways to keep up the personal connection with customers. Although the kirana business is healthy, the sense of business between a family and a family-run neighbourhood store may be under threat.

'Amit is more of a risk-taker. Punit is someone who creates consensus'