Now, it's time to get cracking

Key reforms are stuck with states because the onus of implementation lies with them, and not the central government. But the laggard states have to get moving if they want their share of the country’s economic bonanza. BT's Shalini S. Dagar reports.

In the last few months there have been more than a few instances of sparring between the different state governments and the central government. So, if the Jaipur blasts became a bone of political contention about crucial intelligence reports, West Bengal becomes an election battleground where the allies at the Centre took pot shots at each other over the bungling of land acquisition for industrial purposes.

Naturally then, the same tussle plays itself out in the economic arena, too. Notice how Uttar Pradesh Chief Minister Mayawati makes a Rs 80,000-crore package for development of backward regions a key negotiating point with the Centre.

As the discourse veers from the rate of growth to the inclusivity of it, there is much that is now dependent on the states, as federal reforms head towards its tail-end, whether it be capital market reforms or industrial licensing.

For people to participate in the growth process, they need to be healthy, educated, skilled and have incomes above poverty levels, believes Shubhashis Gangopadhyay, Economic Advisor to Finance Minister P. Chidambaram. “In this new scheme of things, the states have a very important role to play.”

Reason: the really important parts of implementing this simple agenda, however, are areas over which the central government really has little control. These really big ticket reform items are squarely in the states’ jurisdiction. India needs urgent reforms in land, labour and markets—agricultural to health to education services. As things stand, according to the Indian Constitution’s Seventh Schedule, in most of these areas, it is the writ of the states that runs large (See below:  Where it hurts). 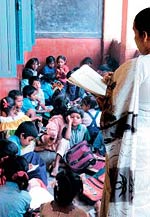 Sarv Shiksha Abhiyan
But instead of creating accountability at the local level, what this constitutional power sharing formula (which includes sharing of revenue as well) ended up doing was to encourage subsequent generations of state leaders—especially those who did not belong to the same party as the one at the Centre—to turn the arrangement into an easy scapegoat for their own failures. “Don’t blame us for the lack of hospitals and schools or roads; the Centre doesn’t give us enough money,” became a convenient excuse for poorly performing state governments.

The irony, however, is that successive Finance Commissions, which are regularly appointed to chart out the process of devolution of funds between the Centre and the states, have only been upping the latter’s share. The broad principle remains that in the interest of promoting equity across the country, some of the more prosperous states get to subsidise their poorly performing peers. Backward states do get relatively more funds, yet there is no fix on the efficiency of utilisation.

The problems stem from the lack of accountability in the states where the existing institutions have not been able to deliver. No wonder, the performance is patchy. This is visible in the huge disparity between the best and the worst performers among the Indian states on key social and economic indicators.

According to the Planning Commission, the per capita income in the best and the worst states can drop from Rs 16,679 to Rs 3,557. Literacy among females aged seven years and above can vary between 87.7 per cent to 33.1 per cent. And infant mortality per 1,000 births can range from 11 to 83 in the best and worst states.

As robust economic growth continues nationally, the differences are only likely to accentuate. And policy planners seem aware of this. Montek Singh Ahluwalia, Deputy Chairman, Planning Commission, agrees that the differences across states are quite substantial but does not believe that it is on account of lack of resources. “States have different environments and different economic capabilities. It is the local governance standards and implementation capabilities that drive development,” he says.

It has also been noticed that wherever civil servants get an assured or fixed tenure, there is a greater likelihood of reforms taking place or better delivery of public services. “Delivery is contingent on administrative reforms. Where the administrative machinery works well, there are fewer leakages,” says economist Bibek Debroy. Where the administration is weak, the burden falls heavily on the poor, who suffer from skewed government spending and limited access to services.

Former Finance Minister Yashwant Sinha points out that funds from the central government go to the district administration. “Where are the reforms at the district level? What is the accountability that we have established?

Diffused accountability between the permanent civil servants and the elected representatives at the local level leads to diffused results and the miasma of corruption.” However, “there cannot be progress on administrative reforms unless the states are fully on board,” says Sinha.

In the interim, the central government, over several regimes, has responded with centrally-sponsored schemes (CSS). The National Rural Employment Guarantee Scheme, Sarva Shiksha Abhiyan, National Rural Health Mission and others are examples. While some may be completely funded by the Centre, some others receive a degree of state funding. However, as Sinha points out somewhat dryly, the central government can make the best schemes “but the cutting edge is with the states. And the cutting edge has no edge.”

S Gangopadhyay
States bristle at this one-sizefits-all approach, which ignores the specific requirements of individual states. Rajasthan Chief Minister Vasundhara Raje does believe that the states will power the next phase of India’s economic growth.

“However, this will only be possible if the roles, authority and flexibility of the states are not undermined by the Centre by diverting more Plan funds towards centrallysponsored schemes and allocating lesser funds for normal central assistance,” she says, citing the case of Sarva Shiksha Abhiyan, which follows a 65:35 funding pattern between the Centre and the states.

“The entire machinery goes out of gear if a state does not receive its due funds on time,” she says, adding in a written response to BT: “The Centre should encourage states with untied central assistance, and with evolving and managing schemes that suit their particular needs.”

Montek Singh
What gives then? Can the Centre move out of the picture? Perhaps. But how can the states be made to perform equally well so they can benefit from the country’s economic growth? There are no easy answers to this.

For sure, “second-generation reforms need to emerge out of the states, which have jurisdiction over nearly all subjects untouched by the reforms process. The focus will have to shift from Delhi to state capitals in areas that are still weak,” says Amir Ullah Khan, Director, India Development Foundation, who recently authored the The States of the Indian Economy.

Yet, what are the ways out of this logjam? One way of doing it will be to incentivise states to fall in line. Debroy points out that a possible manner of incentivisation is to tie in further funding to reforms. He cites two examples: implementation of the Central Finance Commission recommendations could be made contingent upon the implementation of the State Finance Commission recommendations.

Another could be that the revenue loss from implementation of the Goods & Services Tax (scheduled to be implemented by April 1, 2010) would not be made good by the Centre unless all taxes associated with the local bodies are eliminated. Legally and constitutionally, existing bodies such as the Planning Commission and the Finance Commission can use such binding preconditions to catalyse reform.

However, politically, such measures are untenable. Planning Commission’s Ahluwalia says choking funds to the poorer performers will not help as it is not within the Centre’s power to punish states that do not reform fast enough. “It cuts both ways. If you choke funds to states that do not deliver, the states that are backward will be without funds and the better performing ones will continue to get funds, which will increase the disparity.” And holding the underperformers to different or lower standards, too, will undermine the very aim of the exercise.

Hence, while the “carrot and stick” policy may work in some cases, it is not a complete solution. Sinha, however, makes a more compelling case for joint implementation mechanisms for different subjects citing the success of Value Added Tax across states (See below:The VAT Story).

The same format tactically seemed to have worked in the power arena for a while. Such a platform also allows the states to share experiences and best practices. “Now, if state X is undertaking administrative reforms, how does state Y get to know about it?” asks Debroy. Though forums such as National Development Council and Inter-State Council do exist, they are mostly ineffectual.

Setting up empowered committees could be a possible way out, maybe on specific issues, starting with fiscal matters as they are more amenable to cooperation. Implementation of scheme remains with the states
Another model that seems to have worked is that of Pradhan Mantri Gram Sadak Yojana, the wholly centrally-funded scheme for rural roads. It is deemed to be among the better performing schemes, says Sameer Kochchar of Skoch Consulting, which has done reviews of government schemes. Though Skoch’s findings may have a positive skew in the sense that the studies were conducted only in the better performing states of Rajasthan and Maharashtra, there is anecdotal evidence to suggest that the scheme does deliver. What works for the PMGSY (See belowe: PMGSY: A model worth emulating) is that it adopts three levels of accountability and, as Kochchar says, it is difficult for the corrupt channels to coopt so many people. “Accountability must be firmly placed within an organisation and within that, with an individual,” says Sinha. Ergo, the scheme works. A somewhat more emphatic solution would be to amend the constitution— revamp the Seventh Schedule that has the Central, State and the Concurrent list (and effectively scrap the Concurrent list) to make different areas either the purview of the Centre, the states or the local bodies. “The Concurrent list muddies up the decision-making process; central laws often come in the way of state laws (mostly in the case of labour),” says Debroy. There is some support for such a move. Says Sinha: “Perhaps, it is time to think of such a move.” This is already happening de facto in the case of labour issues, where Rajasthan cooperates quite liberally but not Kerala. “So why not make it de jure?” asks Debroy.However, as Ahluwalia argues, the superior performance of some states within the existing system points to the fact that “constitutional issues are not really a major constraint”.

Hence, it seems the way forward is further decentralisation from the states to the local-level bodies, not just politically, but in the fiscal and administrative spheres as well. That means implementing the 73rd and 74th Amendments to the Constitution in both letter and spirit.

According to Gangopadhyay, empowering people is the key. “One thing you will notice in the states that perform better is that people are much more demanding of their governments. Take, for example, Kerala; the people there are much more aware of their social rights.” He cites the case of Right to Information. “The RTI Act has already started having impact. It’s a question of gathering momentum. One or two outstanding examples will change things,” he says.