Oil's off the boil

The sharp drop in crude prices comes as a boon to some sectors, and a curse to others. The big question, though, is: How long will this softness last? 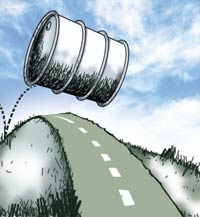 Till not too long ago, AS a wag had put it, it made more sense to have a beer in hand than fuel in a tank. That was the time crude oil prices showed no signs of cooling off, hitting a high of $147 per barrel, and looking good to touch $200. Then the global downturn caught up with crude, resulting in prices cooling off—at the time of writing, crude prices were hovering around $46 a barrel, and showing little indications of polevaulting into three-digit territory once again.

So, what happens to oil demand when prices are falling, but the economy is slowing down? The trend in diesel throws up some surprising answers. Consider: In October 2008, demand for diesel in India—when crude price were around $67 a barrel— was going up at 20 per cent every month. In January 2009, it’s going down at the rate of 12 per cent. Surely the downturn is not as severe in India as those figures suggest. In fact offtake of petrol is a lot different from the trend in diesel—in October, consumption grew by 14 per cent; three months later, there’s a degrowth of 7 per cent.

Click here to Enlarge
What gives?
G.C. Daga, Director (Marketing), Indian Oil Company Ltd. (IOCL), explains that in October, the regulated price of diesel was Rs 4 below the market price of both furnace oil and naphtha, the prices of which are not regulated; diesel can substitute these with little or no modifications in industrial processes. As a result, many industries shifted to diesel to save on costs. In today’s softer price regime, prices of naphtha and furnace oil have plunged way below diesel, to levels of Rs 18-20 per litre, which explains why everyone is scampering back to such feedstock. In fact, a lot of power plants, including ones run by NTPC, that used gas earlier have now moved back to naphtha. S. Thangapandian, CEO (Marketing), Essar Oil, says that the Essar Group’s power plants are back to using naphtha. The significance is clear when one recalls frantic efforts to find gas to restart the closed plant of the Dabhol Power Corporation (now Ratnagiri Gas and Power). The trouble was because the plant needed to stop using the costly naphtha as feedstock to become viable. And today, suddenly naphtha is cheaper than gas. 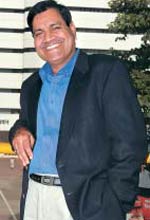 G.C. Daga
Clearly, lower oil prices is a win-win equation for some businesses but not for all. Those who’ve got a leg-up are industries directly dealing with oil, like fuel retailers. Essar Oil has reopened more than 1,000 petrol pumps and Reliance Industries has been making enough noise to suggest it is itching to get on to the turf. At the same time, however, the sudden drop has left refiners in the lurch. Refining margins (the difference between the price of a barrel of crude and the finished products) have plunged; worst off are the public sector fuel retailers, for whom the cushion of high refining margins has suddenly disappeared, even as they continue to bear the brunt of subsidies (to make kerosene and cooking gas affordable). The Digboi refinery of Indian Oil had a refining margin as high as $15 a barrel, but that has now dropped to a single digit. Some other refineries are seeing margins of just $4-5 a barrel.

It may seem an opportune time for fuel retailers—at least the private sector ones—to dust off their dispensers and get cracking, but they aren’t going flat out because of the underlying fear: What if prices bounce back once again? In such an eventuality, the public sector pack may survive only if prices are freed by the government—something that may work in favour of the private sector. In fact, Shell, Reliance and Essar have even taken the PSU retailers to the court of the Petroleum & Natural Gas Regulatory Board, suggesting that low prices maintained by these companies tantamount to predatory pricing, causing damage to other fuel retailers. Meanwhile, Essar has sought permission to retail auto-LPG, which is not regulated by the government.

Fuel retailers point out that they can remain viable as long as crude remains at a level below $58 per barrel. However, even this is no unalloyed bliss, not for the public sector. Daga points out that today the company loses almost as much on kerosene as it makes on petrol or diesel. In January, the PSU retailing companies were making a profit of Rs 9 per litre of petrol and Rs 3 per litre of diesel. But those gains are wiped out by losses of Rs 12 per litre of kerosene and Rs 33 per cylinder of LPG (that was before prices were cut by Rs 5 and Rs 2 a litre for petrol and diesel, respectively, and by Rs 25 per LPG cylinder on January 28). Also, other than naphtha and furnace, another non-regulated product whose price is down is aviation turbine fuel—to Rs 34,000 per kilo litre, down from Rs 72,000 per kl a few months ago. As a result, the PSUs are still waiting for some more oil bonds to wipe out the losses recorded in the first two quarters of the financial year. Another Rs 21,000 crore would be needed to keep the PSU majors in the black this year.

While the private sector is demanding that the government take its hands off fuel pricing, PSU honchos are also silently hoping for the same. Ramdeo Agarwal, Joint MD, Motilal Oswal Securities, feels that a policy change is on the anvil. “If the policy comes in the next six months, all fuel retailers will benefit and Reliance, especially, can ramp up their retail very quickly.”
TweetYoutube