India's overseas oil and gas exploration has been floundering for a while. The latest in the litany of troubles involves the biggest player, ONGC Videsh Ltd (OVL), which has 30 assets in 15 countries. OVL is mired in a dispute over a block in the South China Sea where China claims territorial rights over blocks originally allocated by Vietnamese oil company PetroVietnam. In May OVL withdrew from the block, saying it was unviable. Then China put the block up for bidding, and now, under diplomatic pressure from government, OVL has done an about turn, saying it will hold on to the block for two years, thereby creating a stalemate.

Click here to Enlarge
Perhaps the sole ray of hope among the country's major oil companies is Bharat PetroResources Limited (BPRL), the exploration arm of Bharat Petroleum Corporation Ltd (BPCL). In June, BPRL announced it had found gas in Mozambique's Rovuma basin, in which it has a 10 per cent stake - a discovery that nearly doubled the block's recoverable gas potential to 60 trillion cubic feet.

While other companies are stymied by political and diplomatic conflict, BPRL has good prospects in most of the 16 international blocks where it has invested since it was allowed to do so in 2006. Managing Director D. Rajkumar says: "We too had options to get into countries like Libya, Sudan and other troubled waters, but we stayed away." "It was a combination of in-depth thinking and luck," says R.K. Singh, Chairman of BPCL and BPRL. "Now, we are not buying assets but will reap what we have sown in the last six years." The only asset about which BPRL is relatively less hopeful is in the United Kingdom, he adds.

But BPRL is an exception, while OVL's South China Sea mess is the tip of the iceberg. At least 14 other assets belonging to OVL and other public sector units are affected by turmoil in Egypt, Libya, Sudan and Syria, and the tensions between Iran and the United States. Although the depreciation of the rupee against the dollar and the jump in international crude oil prices helped OVL's revenues, profit after tax in 2011/12 was only 1.1 per cent higher than in the previous year. Its oil production fell eight per cent, and gas output, 5.7 per cent. In 2010/11, oil production had increased 0.6 per cent over the preceding year, and gas production, 13.98 per cent. 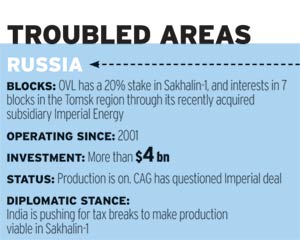 Click here to Enlarge
Ajay Arora, partner at Ernst & Young who leads the oil and gas vertical, points out that most of OVL's "troubleprone" assets were acquired a decade ago, when no one could have foreseen how things would turn out. "At that time, things were evaluated accordingly," says Arora. E&Y was the consultant for OVL's Sudan purchases in 2003. But it is not as if news of India's international oil and gas assets has all been good in past years. After acquiring a stake in Sakhalin-1 in Russia, OVL scoured West Asia and Africa, where it found itself pitted against China National Petroleum Corporation (CNPC) and China National Offshore Oil Corporation. Heavily armed with cash and their government's support, the Chinese companies pipped Indian ones in battles in Angola, Bangladesh, Iraq, Myanmar, Nigeria and elsewhere.

In Iran, Indian companies are caught in the crossfire between the international community and the regime in Tehran. The European Union and the US oppose Iran's nuclear programme, and companies and countries that deal with Iran could face sanctions. In the last three years, India has reduced oil imports from Iran and delayed exploration and production in the Farsi block, and Iran has threatened to scrap the deal. As the next step, the Indian consortium, consisting of OVL, IndianOil and Oil India, is legally bound to sign a development plan with National Iranian Oil Company, but is dawdling.

"There is pressure from Iran," says a petroleum ministry official who asked not to be identified. A board member of one of the consortium companies says Indian companies see potential in Australia, Canada and the US. "If we offend them here, our interests there could be harmed," he says. "Hence we are adopting a wait-andwatch policy and negotiating with the Iranian government." 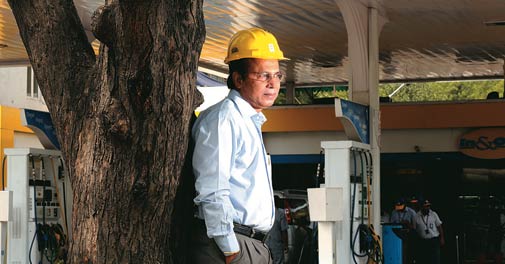 Now, we are not buying assets, but will reap what we sowed in the last six years: R.K. Singh
The official says that even if the consortium signs the plan, things will be delayed, as the sanctions on Iran make it tough to get equipment and raise capital. An official petroleum ministry spokesperson says: "We have told the international community that we can't sever relations with Tehran, as we have historical links. But Iran needs to make the international community comfortable about its energy programmes."

OVL Managing Director D.K. Sarraf says his company is in touch with Tehran, but refuses to comment further. In South Sudan, OVL's investment in the Greater Nile Oil Project, in partnership with China's CNPC, was stymied as the breakaway nation - it gained independence from Sudan in July 2011 - halted production in June 2011.

Foreign ministry officials say South Sudan suspects China of helping Sudan crush its freedom movement. Last year, until production was halted, this block had yielded OVL 2.5 million metric tonnes of oil. In April, the ministry sent Additional Secretary Amarendra Khatua as special envoy to the region to help restart production. The oil ministry official says a small amount of production has resumed, and that things will improve when diplomatic ties are established. South Sudan is oil-rich, but lacks refineries. Former petroleum minister Ram Naik points out that none of the Indian companies' problems arose overnight. "One needs to factor in troubles in the foreign country where one has assets," he says.

In Europe, OVL has a different type of problem. According to a March 2012 Comptroller and Auditor General report based on an audit of 20 of OVL's 45 assets for the period between April 2004 and March 2010, the company paid too much to acquire Imperial Energy in Russia. The report also noted that OVL overestimated Imperial's reserves and production potential, leading to a loss of `1,182 crore. The Central Vigilance Commission has initiated an inquiry into the deal.

OVL had to make a $408 million provision for the next financial year for Imperial's poor show. Business Today made many unsuccessful attempts to contact R.S. Butola, who was managing director when the deal was struck. India is lobbying for tax breaks for exploration in Imperial's seven blocks in the Tomsk region. A foreign ministry official says: "The Prime Minister on his last visit discussed this issue with the Russian establishment." However, no headway has been made since.

A consortium of Oil India Limited (OIL) and IndianOil is adrift, too - it has not made a single acquisition in three years. "We have set aside Rs 6,000 crore for foreign acquisitions," says OIL Chairman S.K. Srivastava. "We are in talks for two locations, and might close the deal soon." In Egypt, Libya and Syria, political violence has forced Indian companies to abort operations. "We have no option but to wait and watch developments," says an official spokesperson for the external affairs ministry.

Since 2003, Indian oil companies have invested $100 million in Libya. OVL has surrendered its three blocks there, and OIL and IndianOil have said they cannot fulfil obligations in two of their three jointly operated blocks. After OVL invested more than half a billion dollars in Syria through ONGC Nile Ganga Corp - and got 0.8 million metric tonnes of crude out of it - the Syrian Petroleum Company, which operated the block, shut down production because of anti-government violence.

Aashish Mehra, Global Partner and Managing Director of the India and Asia-Pacific practice at Strategic Decisions Group, believes risk evaluation should be more rigorous. "OVL must partner with the right type of companies, and deal with more transparent and friendly regimes," he says.