Here's a look at the people, products and places that were in the news recently. 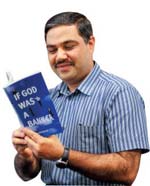 Ravi Subramanian
A bank of stories

Scandal, intrigue and mystery are no strangers to the world of banking. Little surprise then, Ravi Subramanian (39), Head (Consumer Assets and Credit Cards), HSBC Group, aims to be known as the “John Grisham of Banking”. An alumnus of IIM Bangalore, this career banker has spent 16 years working with foreign banks. His true calling, though, is writing fiction. Says Subramanian: “There are emotions, power, money and crime in banking. When brought together, these four elements create a brilliant recipe for a potboiler.” And he seems to have mastered it. His third book, Devil in Pinstripes, is slated for a November release. Set in modern day retail banking environment, the novel is about corporate politics. Subramanian’s debut novel, If God was a Banker, was a national best-seller in 2007 and has sold 10,000 copies so far. The book also won him the Golden Quill Award for Readers’ Choice for 2008. “If people think of a banking story, they need to think of me. That’s when I would count myself as a successful author,” he says. His second book, I Bought the Monk’s Ferrari, equally set the bookshelves on fire. Time for another blockbuster? 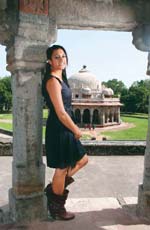 You would suppose that Facebook did not need additional promotion, but Meenal Balar, International Marketing Manager for the social networking site, thinks otherwise. In India as part of a concerted effort by the 200-million-strong network to increase its profile here, Balar, 28, says that India has several unexplored opportunities for the service. “Brands are just beginning to realise the power of directly connecting to their consumers through Facebook, and I feel that brands in India can and will take a lead in doing this.” Already some media brands and films have successfully exploited the power of online social networks to promote themselves, she says. “But what is so good is that we will be able to also leverage this with advertisers. Advertising on Facebook will never be blatant, but can be targeted.” The growth numbers have never been a problem for the site so far. It had merely 20 million users when Balar joined in 2007; that has now grown to over 200 million users. Says Balar: “If we can keep our trajectory going, particularly with more young Indians coming online, who knows what next?”

You might have seen Skullcandy’s outrageously coloured earphones/headphones at music stores abroad. Now, you can buy them in India for Rs 1,799. The “Lowrider” was described by one tech reviewer as a “Skull Crusher”, thanks to its powerful bass drivers. This is not a product to listen to classical music on, designed as it is for today’s bass fanatics. Think of these as wearable subwoofers. And comfortable ones, too. So comfortable that you won’t notice the low frequencies turning your brain into mush. Maldives President Mohamed Nasheed and 11 of his ministers recently donned scuba gear to plunge into the Indian Ocean for a Cabinet meet to highlight the sinking island nation’s problems. Whether Maldives is, indeed, sinking is debatable, but what is beyond debate is the nation’s pristine beauty. Nestled in the middle of the Indian Ocean, the Maldives are a series of ancient coral reefs that grew around towering prehistoric volcanoes. When the structures sunk into the ocean, they left behind stunning coral islands. Visit Male, the capital, for its breathtaking beaches and to see the colourful shops and lively markets. Also check out the southern Atolls for great surfing and scuba-diving experience. Direct flights operate daily from most Indian metros to Male.

Himani Modi
‘O’ Yes! She Can

Is she dabbling in yet another venture? “Yes, it’s about leading the Modi Group into another area of diversification—after all, that is what we excel at,” says 34-yearold Himani Modi, Executive Director, UK Modi Group. Fresh from her four-month stint for a business programme at Harvard Business School, this youngest daughter of U.K. Modi is leading the group’s foray into entertainment. “This business is all about execution and catching the right moment. It often works on a fad,” she says. But her involvement does not appear to be passing in nature. She cut her teeth with Barcode lounge in New Delhi. After winding that up, she is now ready to launch “The O Experience” all on her own steam. Spread across 7,500 sq. ft in the Vasant Vihar area of New Delhi, her new venture hopes to offer an entirely green concept of hospitality. “We are looking to tie up with the UK-based ‘Exotic Nature’, a visual content provider,” she says. This facility will have an organic food store, café, lounge, discotheque and a fitness zone on its five floors. Tip: Watch out for the live bands, celebrities, nutritionists and stand-up comedians that are just waiting to troop in.

'The world is a much poorer place now'