Mithel Britney, the poodle, had a lavish birthday party when she turned two a few months ago. All her friends arrived at the swank Delhi venue where it was held, looking their best, many having spent the afternoon at pet beauty salons. There was Venus, the Bedlington terrier, Ace, the white poodle, both with their hair styled in different ways, and several others. Britney's owner served them choice canine delicacies - from dried buffalo pizzles (an archaic term for penis) to smoked and bleached bones - and a great time was had by all.

Clean-up act: A toy poodle has its ears cleaned at a pet salon in Delhi
It is not just birthday parties and regular visits to beauty salons. With owners willing to splurge, pets in India - predominantly dogs - have never had it so good, being clothed in designer outfits, or taken on weekend trips to pet resorts or spas. The pet industry, as a result, has not just stood up on all fours, it is bounding ahead. With the segment not having been paid much attention yet by analysts, estimates of its size vary widely. While global research firm Euromonitor International puts it at Rs 450 crore and growing by 10 to 15 per cent annually, Gaurav Malik, founder of dogspot. in, a portal professing to meet 'all your dog needs', maintains it is much higher, around  Rs 2,000 crore. "The size of the dog food industry alone is around Rs 800-900 crore," he says.

Sanjiv Kumar, who hosted Britney's party, was once a banker. His love for canines led him to quit HDFC Bank to co-found Scoopy Scrubs, a pet grooming salon in Delhi, in 2005. Today he has seven branches across the city, servicing together around 150 dogs daily, earning him Rs 35 to 40 lakh a year. Kumar's repertoire includes dog-exclusive shampoos, brushes, gels and powders, whose overall market he estimates at  Rs 50 to 60 crore. "A dog-shampoo like the imported 'Isle of Dogs' brand costs Rs 1,600 for a 250-ml bottle," he says. (In comparison, a same-size bottle of L'Oreal's 'Professionnel Liss Ultime' shampoo costs Rs 1,100.) Combs and brushes for dogs cost between Rs 100 and 400 each.

Beauty treatment: After the ears, the toy poodle gets a haircut
Dog clothing is growing increasingly popular, especially for special occasions. "I sold 20 sherwanis for dogs during this wedding season," says Rashi Sanon Narang, owner of Heads Up For Tails, a pet accessory store in Delhi. Visits to canine grooming salons are almost de rigueur too, more so before special occasions such as birthday parties or participation in dog shows. These offer a range of services for pets from basic hygiene grooming to aromatherapy, conditioning baths and massages, skin conditioning and skin treatments, the cost varying from Rs 300 to Rs 10,000. Hair styling has an array of options, such as 'lion clipping' - in which the dog is shorn of all its fur, barring the mane and the tail-end - or 'lamb clipping', a style fashioned especially for poodles. There is no end to dog owners' whimsy. "They sometimes want their pets to wear nail polish to match their clothes," says Yashodhara, pet groomer and founder of salon Fuzzy Wuzzy in Bangalore.

Final touches: After a conditioning bath and massage, a Pekingese is blowdried
The latest indulgence for pets is exclusive resorts. At Paws Pack in Pune, started in 2007, every dog booked in gets its own room, complete with sofa and bed, and plenty of space outside to play. There is a large swimming pool for those who want to take a dip. "We have 95 per cent occupancy through the year," says co-founder Tanya Kane. "In the peak season bookings have to be made a month or two in advance. Some dogs have stayed with us for as long as four months." Owners generally leave their dogs in resorts like these while they go vacationing, confident they will be well looked after. 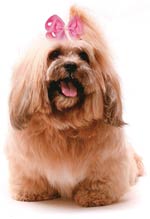 Ready for the show: A Shih Tzu with a perfect hairdo gets ready for a dog show
The cost of pedigreed dogs varies widely, from Rs 5,000 to 75,000 and beyond, while winning a dog show increases their value manifold. "I bought my poodles for Rs 40-45,000 each, but after winning shows, they are now worth around Rs 2-2.5 lakh," says Kumar. Such dogs and their offspring are also much in demand for stud or mating services, for which they are paid between Rs 20,000 to Rs 50,000. "Preparing their pets to win shows is thus an investment for many owners," he adds. A Shih Tzu and a toy poodle all decked up for a party
For them and for the industry, many feel more can be done to encourage people to nurture pets. "The government should reduce duties on imported pet products and encourage pet-friendly hotels, malls and parks," says Binoy Sahee, Director, India International Pet Trade Fair. But even without sops, the industry's future is bright. "The pet market is growing and will continue to grow at twice the rate of industry as a whole," says Malik of dogspot.in.

With another Budget in the offing, this is one industry Finance Minister Pranab Mukherjee need not worry about.