A majority of the “happy” farmers in Singur feel the Tatas are not being unreasonable in opposing relocation of vendors, while the angry farmers are equally split on this issue. 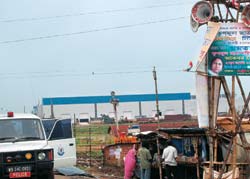 Singur at the crossroads: Will the deadlock over the land issue in Singur get settled? Nobody knows for sure
As September dragged on, the Singur imbroglio first took a turn for the better—and then for the worse. Better, because Mamata Banerjee and her Trinamool Congress finally agreed to talk to the government and lift their dharna outside the small-car project site that had forced the Tatas to suspend work. Worse, because from the talks emerged a joint committee, which has been mandated to suggest a solution on an issue that is tied up by the law and that the Tatas don’t want reopened.

Banerjee wants the government to return 300 acres out of the 997 acres that it had acquired in 2006 for the main Nano plant and the ancillaries. Her stand: the land was taken forcibly from farmers. Banerjee says the ancillaries—for whom a similar area was earmarked— can very well move to another location.

The committee was undecided as this edition was going to print. West Bengal’s Governor Gopalkrishna Gandhi was forced to appeal for reason. “Through the Singur discussions on September 5, 6 and 7, I saw … a rare spirit of accommodation. That spirit needs to be operationalised.” With Banerjee walking out in a huff after talks with Chief Minister Buddhadeb Bhattacharjee on September 12, the Governor seemed to be the only optimistic person. “I believe, given the will, a solution can still be found in a manner that accords with the law, safeguards the interests of farmers, of the small car factory and, going beyond, helps in establishing the farmfactory balance…” he said.

Click here to Enlarge
The nightmare begins on the map and is likely to end in the courts (on Sept 12, the Tatas moved court to prevent the disclosure of the details of their deal with the government). For one, the area staked out by Banerjee is the sum of small plots that dot the site and not a clean separable chunk. A one-toone mapping of plots and their original owners could lead to ridiculous situations. Then, as the government has been emphasising, any land acquired for public purpose under the Land Acquisition Act of 1894 (as the Tata Motors land was) cannot be returned to the original owners.

At best, it can be auctioned. As for Mamata’s claims, it seems that only 120 acres of the 300 sought by her are vacant now—on the rest, construction has already begun. Of these 120 acres, only around 30 acres belong to various farmers unwilling to sell out. Legal experts say the West Bengal Land Acquisition Manual of 1991, which apparently indicates that return of acquired land is possible, is just for guiding state government officials and is not framed under the Act.

They cite two orders from the Supreme Court—both handed down after the manual was framed. Banerjee’s claims shrink further if one goes by the government’s records, which show that part compensation was paid for 205 acres— some claimants got the money and some did not.

That leaves just 100 acres in the project area. So far, there have been no direct interactions with those farmers who have reportedly refused to sell out. But what do the people of Singur say? A BT-Synovate snap poll among the 100 affected farmers and local traders conducted on September 11, revealed that 80 per cent of the “happy” farmers say Tatas are not being unreasonable in opposing relocation of vendors, while the angry farmers are split 50:50 on this issue. And 82 per cent of those polled say the Tatas should not shift. Telling. May be the leaders should listen.