Anil Ambani’s Reliance Power has bagged three of the four ultra mega power projects that have been awarded by the government. Has it bitten off more than it can chew?

Anil Ambani
January is the coldest month of the year in most parts of the world. It’s a month in which birds travel less, bears sleep all day and night, and plants rest. Back home, however, January has been one hectic month for the Anil Ambani-promoted Reliance Power (RPL), for two years running now. In January 2008, the company raised Rs 11,563 crore from four million investors in India’s biggest-ever initial public offering (IPO), when the stock markets were at their zenith. January 2009 has also been good for RPL. Towards the month-end, it won a third ultra mega power project (UMPP) of the four awarded in the past two years. RPL’s tariff-based competitive bid for a 4,000 MW pithead UMPP at Tilaiya in Jharkhand proved, yet again, to be the winning one.

That’s not a bad record for this 20-monthyoung power upstart, which inherited one UMPP from the erstwhile Reliance Energy— the 3,960 MW Sasan in Madhya Pradesh—and which now has lined up an array of projects totalling 32,200 MW (including Tilaiya). The company’s projects in the pipeline make up almost a fifth of India’s current installed capacity of 1.46 lakh MW and equal the capacity that the market leader NTPC (National Thermal Power Corp.) has created over the past three decades.

The catch, of course, is that RPL has no capacity that’s operational as you read this. Its projects are due to go on stream only from next year. Also, don’t forget a UMPP is of unimaginable scale, to be built with super-critical technology that is entirely new to India. It, therefore, involves meticulous planning and massive resources. According to Ambani’s own estimates, each project requires an investment of between Rs 16,000 crore and Rs 20,000 crore. The project developer is also required to provide a performance guarantee of Rs 300 crore, which increases by 150 crore for each subsequent project. Thus, for Tilaiya, Reliance needs to give a guarantee of Rs 600 crore. 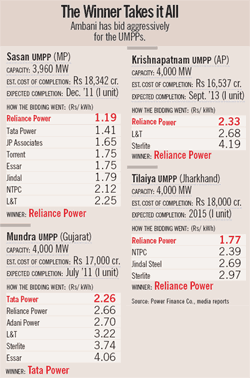 Click here to Enlarge
A steep bid?
Sections of analysts see Reliance’s Tilaiya bid as steep. Girish Solanki, Research Analyst, Angel Broking, calls it “aggressive”. “Every bidder had the same set of documents and factored in all risks. If Reliance has still gone for this expensive bid, then I think they have some (different) plan in mind,” he says. He may be right. Ambani had said at RPL’s annual general meeting last September that the company has devised a commercial strategy for large-value purchases which helps it minimise the impact of price variations. “We continually monitor the emerging price trends of commodities with a view to optimising our costs,” he had said.

Yet, in the opinion of a senior executive at a state-owned generation company, the difference of 62 paise between the first and second lowest bids for Tilaiya is too huge a gap to gloss over. “Even assuming that NTPC’s bid (of Rs 2.39 per kilo Watt hour or kWh) could be on the higher side, could it be so wide off-the-mark?” he wonders. NTPC, for its part, has no regrets. “Ours was a very competitive and doable tariff. If we understand power plants well, that is our tariff,” says R.S. Sharma, CMD, NTPC. J.P. Chalasani
NTPC stations supply electricity at tariffs of between 80 paise and Rs 2.60/ kWh, depending on the plant’s location and age. “We build power plants that will last 35-40 years, not just for 25 years (UMPP tariffs are for a 25-year period). Does NTPC have to prove its credentials now by winning UMPPs? If so, at what cost?” asks Sharma. In January, eight NTPC thermal stations reported a plant load factor (PLF) in excess of 100 per cent.

Doubtless, Reliance walking away with Tilaiya with its lowest tariff bid of Rs 1.77/ kWh— 62 paise lower than NTPC—has not everyone cheering. In fact, as soon as the news broke, Jairam Ramesh, Minister of State for Power, hinted at raising the entry barrier for companies that have already won UMPPs. Higher barriers will clearly go against UMPP winners RPL and Tata Power; the latter is developing the 4,000 MW Mundra UMPP in coastal Gujarat, to be fired on imported coal. 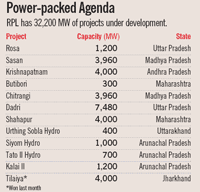 Click here to Enlarge
Low bid justified
RPL, for its part, justifies its low bid as it believes the project cost of Tilaiya is likely to be lower than that of Sasan—for which RPL’s revised bid of Rs 1.196/ kWh was accepted after Lanco’s disqualification— on account of lower input costs. “We would also have significant benefits of synergies and economies of scale between the two projects as they are located nearby (400 km from each other),” says J.P. Chalasani, CEO, RPL. He doesn’t believe RPL’s bid was aggressive. “Our benchmark for Tilaiya bid should not be NTPC’s bid of Rs 2.39/ kWh, but our own bid for Sasan of Rs 1.196/ kWh.”

There are analysts like Ashok Jainani, Head (Research), Khandwala Securities, who think the tariff of Rs 1.77/ unit could be feasible, with captive coal mines. But he warns that any delay in projects to be commissioned before Tilaiya could derail Reliance’s estimates of accruals. Chalasani, however, is categorical that none of Reliance projects will encounter difficulty of funds as Sasan, Butibori, and Rosa I & II will start earning revenues by the time Tilaiya’s first unit is commissioned in 2015. At the moment, Sasan is in the process of achieving financial closure with banks sanctioning Rs 11,500 crore. Says Chalasani: “What banks are doing is project financing, not balance sheet financing. The banks, in today’s conditions of liquidity crunch, are lending us only because they are convinced that UMPPs will generate profits.” “In a power project, lower tariff means long tenor loans, and banks are normally receptive to 14-16 year loan tenor,” avers Somak Ghosh, Group President (Corporate Finance and Development Banking), YES Bank, which has supported UMPPs with Rs 300 crore by way of performance guarantees. R.S. Sharma
Need for tight clauses
There are also opinions that the government, in future, could look at a company’s project completion record, rather than relying just on competitive tariffs alone. Such tight clauses, however, entail the risk of eliminating a new player, and at worst, could even pave the way for cartelisation. One practical approach, according to Ghosh, is to select developers on the basis of their ability to complete a project within costs and in time. Manish Agarwal, Executive Director, KPMG India, feels the government should remain involved with a project till it reaches critical milestones. He suggests that the government could ensure higher degree of transparency in data related to coal blocks and mining so that developers prepare their bids on realistic assessments, not on assumptions.

Tariff-based bidding has come as a whiff of fresh air to consumers, who have long been shortchanged by generating companies that sold power for bloated profits. “Since the UMPP tariff is determined through competition, any capping of the projects does not augur well for the power sector,” warns A.K. Srivastava, Managing Director, Essar Power, which unsuccessfully bid for Mundra and Sasan. “No such barriers exist in other sectors like oil & gas and infrastructure. Why should such thoughts be entertained for UMPPs?” Chalasani asks. Now all RPL has to do is to execute the UMPPs… on time.